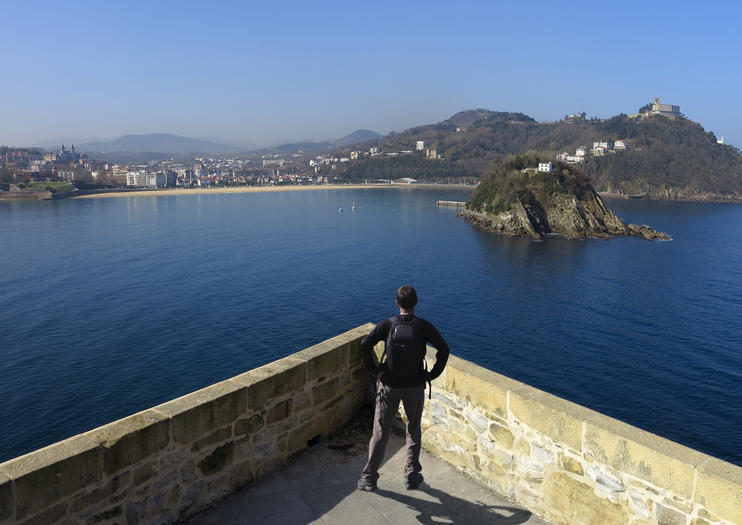 Of the two headlands that bookend San Sebastian’s La Concha Bay, Monte Urgull to the east was an especially important defensive site, starting in the 12th century. Today, Monte Urgull draws visitors for its views of the city and bay, La Concha and Ondarreta beaches, Santa Clara Island, and Monte Igueldo, the western headland.
The Basics
Situated just above Old Town (Parte Vieja), Monte Urgull is easy to visit during a day of sightseeing in San Sebastian, and offers a leafy respite from the beaches and pintxos (small snacks) bars. Take your time walking up one of the pathways to admire the bay or the sea, and visit the military and cultural attractions at your leisure.
The hill is topped by Castillo de la Mota, a 12th-century fortress that’s now home to a history museum called Casa de la Historia. You’ll also find the Sagrado Corazón (Sacred Heart), a statue of Christ that has been watching over San Sebastian since 1950. Another popular attraction is the English Cemetery, located a bit down the hill.
Things to Know Before You Go
How to Get There
There are a few different paths to explore Monte Urgull. From Old Town, start from Plaza de Zuloaga or the end of Mari Kalea, or head up from behind the waterfront aquarium. If you’re not interested in walking up the hill, stroll around the headland on the waterfront promenade known as Paseo Nuevo.
When to Get There
Monte Urgull is not accessible at night, so plan to visit during the day. Opt for the morning hours to avoid walking in the midday heat.
Monte Igueldo
For a full San Sebastian experience, don’t miss a visit to the city’s western headland, where you’ll get more exercise as you walk uphill for a reverse panorama of the bay. If you don’t feel like walking, hop on the Funicular Monte Igueldo and visit the small amusement park at the top of the hill, especially if you’re traveling with kids.
Address: Castillo de la Mota, San Sebastian, Spain
Read MoreShow Less

75
Explore the Basque history and quirky charm of San Sebastián on this bike tour. Cycle along beaches, rivers, battlefields, and bays with a savvy guide, passing by aristocratic palaces and avant garde pinxto bars along the way. With a relaxed pace and the flexibility to stop often, It's a great way to get acquainted with San Sebastián’s contrasting historic highlights and modern vibe.
...  More
From
US$51,48
From
US$51,48
Learn More

1
I love what I do and people can perceive that enthusiasm. I prefer small groups for a better atmosphere and a more exclusive experience.
...  More
From
US$23,95
From
US$23,95
Learn More

7
According to the good old saying that love goes through the stomach, it is no exaggeration to describe San Sebastian as the city of love. There are many things that make me enthusiastic about San Sebastian, the nature and the vast sea, the beautiful buildings of the Belle Époque, the lively old town. San Sebastian is definitely a gem and the great food and great pintxos are the icing on the cake, so to speak. Of course, the visit will be tailored to your wishes.
...  More
From
US$119,73
From
US$119,73
Learn More

Kill two birds with one stone San Sebastian is a very beautiful city and world famous for the local gastronomy. In this tour we give you the opportunity to get to know the city in depth. By car and by foot, we want to show you the best spots and let you know about the history and curiosities of the city.
...  More
From
US$568,70
Price varies by group size
From
US$568,70
Price varies by group size
Learn More

Enjoy this private 5 day experience in Bilbao 1. Transfer - Private arrival transfer from Bilbao airport to Bilbao hotel 2. City tour Bilbao: Private 4 hour tour of Bilbao with private luxury vehicle with chauffeur and Private official tour guide. Enjoy the best of the city of Bilbao. 3. Tour a San Sebastian from bilbao Private full day tour to San Sebastian from Bilbao. Luxury vehicle with chauffeur for 8 hours. In San Sebastian meet you private official tour guide for a 4 hour guided visit. Have a view of the best parts of San Sebastián. 4. Tour of pinxtos: Pinxtos and tapas tour of Bilbao. Enjoy the Casco Antiguo and taste the best of the Basque cuisine! 5. Departure transfer: Private departure transfer from Bilbao hotel to Bilbao Airport These days can be interchanged and modified to fit your own needs.
...  More
From
US$1 316,98
Price varies by group size
From
US$1 316,98
Price varies by group size
Learn More

Things to do near San Sebastian