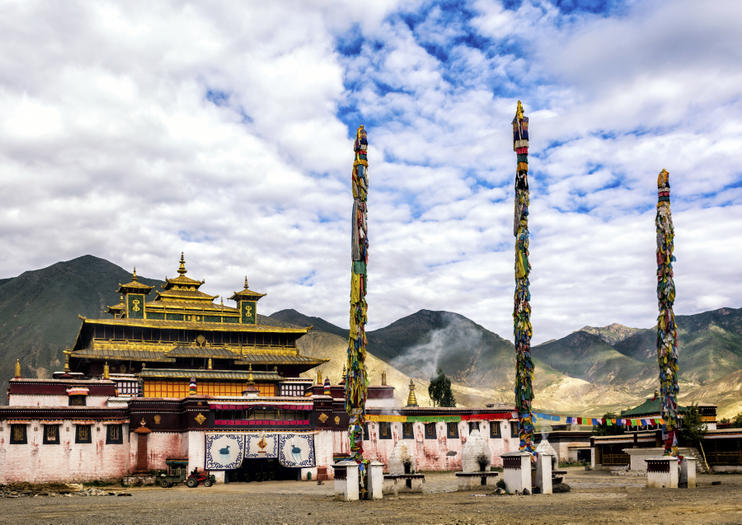 Samye Monastery was the first monastery to be established in Tibet and the location where some of the earliest Tibetan monks were ordained. Built in the 8th century, the site isn’t only famous for its age, but also for being constructed in the shape of a giant mandala symbolizing the Buddhist universe. The prominent centerpiece of the mandala is the main temple, which represents the legendary Mt. Meru. This main temple is surrounded by four additional important structures, the lingshi temples representing the four continents. Additional flanking buildings embody islands, there is a sun temple to the north and a moon temple to the south and a thick wall topped with tiny white chortens encasing the whole world.
The buildings are all painted in the typical red, white and ochre colors and topped by gabled golden roofs glittering in the sun. Equally as impressive as the facades are the rooms of the monastery. Samye Monastery is renowned for the vivid art and there are hidden murals, huge and intricate mandalas covering the ceilings and carefully painted statues waiting to be discovered everywhere. One of those statues, and maybe even the artistic highlight of the temple, is a depiction of Chenresi, the patron deity of Tibet. He can be found inside Chenresi Lhakhang and is shown having a thousand arms to aid all the suffering beings in the world.

Samye Monastery is located in Dranang, within the Lhoka Prefecture about 6 hours outside of Lhasa. To get there, take the bus from Lhasa to Samye Crossing, cross the river by boat and on the other side, get on one of the special monastery busses shuttling visitors back and forth. The monastery opens daily from 8am to 5:30pm.
Address: Dranang, Tibet, China, China
Read MoreShow Less

With its combination of dramatic natural scenery and culture steeped in traditions, Tibet is a journey few travelers make but none regret. Discover the beauty of Tibet's nature and culture on this 4-night tour, which includes visits to top Lhasa attractions as well as the Samye Monastery and the Yarlung Tsangpo River. This tour includes your Tibet Travel Permit, as well as all meals, accommodations, and guided sightseeing experiences as per itinerary.
…More
From
US$828,34
From
US$828,34

1
Visit the sacred Samye Monastery on a day-long tour from Lhasa. Surrounded by stunning scenery, the site was the first Buddhist monastery to be built in Tibet. Learn about its lauded mandala design and admire a variety of Asian architectural styles as you explore with a guide. Admission fees are included, but Tibet travel permits are at your own expense and must be arranged with the local supplier 20 days before you travel.
…More
From
US$240,00
Price varies by group size
From
US$240,00
Price varies by group size

Tibet Shambhala Adventure introduce you Tibet differently by arranging different unique and authentic Tibet trek. Ganden Samye trekking is one of the mid level best Tibet trek. It is not only one of the most attractive Tibet treks but also a Tibetan traditional pilgrimage trail between the two famous monasteries which are Ganden and Samye monasteries. Ganden monastery is the first ever Gelukpa school monastery built in 15th century by the great master Tsongka, the founder of the Gelukpa school and the Samye monastery is the first ever Nyingmapa or the first ever Tibetan monastery which was built in 8th century by the 38th Dharma King called Trisong Detsen. It is three and half days Tibet trek and the total distance of the Ganden Samye Tibet trek is around 80Km. The average daily walking hour is around 5-6 hours. The most part of the Ganden Samye Tibet trek is not very difficult except the Shugarla pass which is around 5000m so the day of trekking across Shugar la.
…More
From
US$1 684,22
From
US$1 684,22

1
The 12 days group tour journey has the highlights of traveling to Authentic Tibetan monasteries including Samye Monastery, Ralung monastery, Sakya monastery, and Ganden monastery. This fantastic tour allows Travelers to visit the beauties of all the four different schools of Buddhism in Tibet. Samye monastery is the first monastery in Tibet from Nyingma School. Ralung monastery was once the largest monastery in Tibet from Kagyu school with authentic old buildings. Sakya monastery is the largest Sakya school monastery, and Ganden monastery is one of the main monasteries of Gelukpa school.
…More
From
US$2 421,06
Price varies by group size
From
US$2 421,06
Price varies by group size

Tsetang to Lhasa tour is started in the southern part of Tibet and it is a classical Tibet vacation. The southern Tibet, known as Lhoka is one of the most scenic parts of the Tibetan high plateau, where Tibet's ancient cultural heritage can be explored against a backdrop of shifting sand dunes, forested glades, visionary lakes, and jagged snow mountain. Your Tibet vacation starts at Lhasa airport and will be warmly welcomed by the Tibetan tour guide and will lead you to the Yarlung valley, visiting Yumbu Lhakang, the first Tibetan castle and Traduk temple, the first temple of Tibet. Samye monastery which is the first monastery of Tibet.
…More
From
US$863,16
From
US$863,16

The 10 days tour will allow you to visit the most of Tibet's highlights, including the Potala Palace, Jokhang Temple, Drepunag and Sera Monasteries, Yamdrok Lake, etc. It is perfect combination of the cultural and natural sites. Start now to plan your lifetime Tibet tour.
…More
From
US$1 031,58
From
US$1 031,58

2
Tibet classical Tour is one of the richest cultural Tibet tours and the best Tibet tour in 2017. The classical Tibet tour is started with Lhasa tour including the Potala Palace, Jokang temple, Bharkor Bazar, Drepung and Sera monasteries. Continue your Tibet Tour to Tsetang which is located to the south of Lhasa at the distance of 160 km and the Yarlung valley, created by the grand Barhmaputra river. Barhmaputra river starts its source from the rivers near Mount Kailash and Lake Mansarovar in the Far Western Tibet. Your Tibet tour to Tsetang dominates by the cradle of Tibet which means that the Tsetang valley creates with Samye monastery as the first monastery of Tibet, Yumbu Lhakang as the first castle of Tibet and Zara as the first field of Tibet.
…More
From
US$831,58
From
US$831,58

6-Day Private Tour from Lhasa to Tsedang in Tibet

Tibet Everest tour is a cultural Tibet trip plus Mount Everest Base Camp visit from Tibet side. Tibet Everest tour will be started from Lhasa airport and ended up at the Tibet Nepal border. You will drive directly to the southern part of Tibet, known as Lhoka in Tibetan. The capital city of the Lhokan region is called Tsetang and it is located in the Yarlung valley which was created by the Yarlung river or Barhmaputra river. The Barhmaptura river flows from the far western part of Tibet near Mount Kailash. The river flows through Shigatse, Tsetang, eastern forest region of Tibet and finally goes into the west Bengal or Assam.
…More
From
US$1 640,00
From
US$1 640,00

Overview tour of Tibet - 6 days, pick up from Lhasa airport

Tour provides overview of main places to see in Lhasa and vicinity. Perfect for the first time visit to Tibet. We will take care of the organization of the entire trip: Tibet Travel permit, pick up and drop off at Lhasa airport, accommodation at 3-star hotel (breakfast and lunch incl.), and include guided tours to Potala palace, Jokhang Temple, Drepung monastery, Sera monastery, and Norbulingka. Please allow at least 3 weeks for Tibet travel permit to be issued and to be delivered to the address of the hotel in China of your choosing. Please contact us through Tripadvisor, via either email or phone number to provide us address of your hotel in China and details of date and time of your arrival to Lhasa airport for pick up. We also would need your passport information, nationality, gender, and details of your Chinese visa to be able to facilitate Tibet travel permit
…More
From
US$1 070,00
From
US$1 070,00

This tour included all the highlights in Lhasa city: Potala Palace, Jokhang Temple,Barkhor Street, Sera Monastery and Drepung Monstery. You can appreciate the Yarlung Tsangpo (Tibet’s largest and longest river)and visit the Samye monastery(the first Buddhist monastery built in Tibet). Go for Kora (religious circle) around Hepori hill and enjoy the sand surrounding you. The local Tibetan English-speaking guide will help you understand Tibet culture better and you don't need to worry about the Tibet permit issue. Airport or train station pickup and drop-off also included for added convenience.
…More
From
US$765,00
From
US$765,00
Gear/equipment sanitized between use
Transportation vehicles regularly sanitized
Regular temperature checks for staff
Learn More
Taking safety measures

Things to do near Tibet