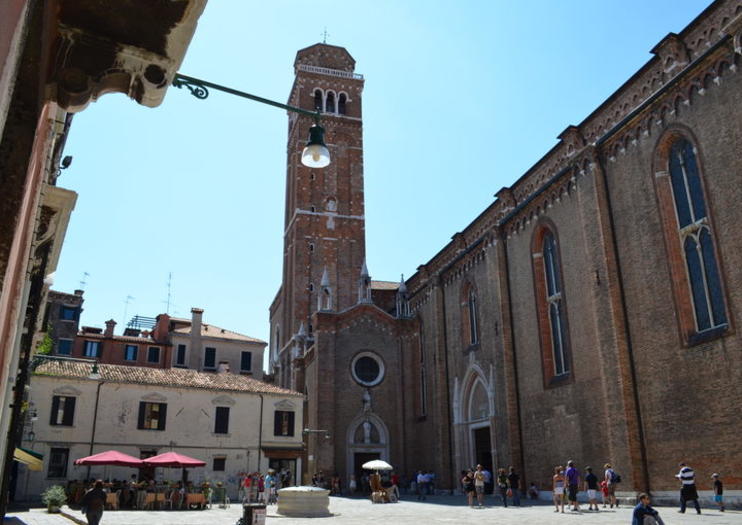 The modest Italian Gothic exterior of Venice’s Frari Church (Basilica dei Frari) belies the wealth of Italian Renaissance masterpieces inside. Titian’s Assumption of the Virgin (1518) altarpiece is especially notable, its innovative emotional figures and bright colors marking the start of Venice’s High Renaissance.
The Basics
This plain brick church was built for the Franciscans between the 14th and 15th centuries, and the monks commissioned a number of renowned artists and sculptors of the time to decorate the interior—which became home to some of the city’s most important works of art. Significant works include Titian’s Pesaro Madonna; Giovanni Bellini’s Madonna and Child with Saints Nicholas of Bari, Peter, Mark, and Benedict; and Donatello’s St. John the Baptist, believed to be the Florentine artist’s first work in Venice. In addition to its glorious art and sculpture, be sure to admire the church’s ornately carved choir stalls by Marco Cozzi.
The Frari Church is located in Venice’s central San Polo district, home to the Rialto Bridge and market and one of the city’s most captivating neighborhoods to explore on a walking tour. Due to the scope and importance of the Titian painting behind the main altar—and other artworks inside the sacristy, nave, and side chapels—by far the best way to visit is under the guide of an expert. Join a private or small-group tour to fully appreciate these Venetian art masterpieces.
Things to Know Before You Go
How to Get There
The Frari Church (Basilica dei Frari)is on the Campo dei Frari, which you can reach on foot along a series of twisting lanes skirting the neighborhood’s quiet canals. The nearest vaporetto (ferry) stop is S. Toma.
When to Get There
Venice is one of the most popular destinations in Italy, and all of its sights can be very crowded in the high-season summer months. If visiting from May to November, try to schedule a Frari Church visit in early morning or late afternoon, when you can enjoy the sumptuous art and sculpture in relative peace. The church is open daily from 9am to 6pm (Sundays and holidays from 1pm); last entrance is at 5:30pm.
Notable Tombs in Frari Church
The Frari contains the funerary monuments of a number of important and wealthy Venetian doges and religious figures, including members of the powerful Pesaro family. The artist Titian is interred here, as is the sculptor Antonio Canova’s heart, preserved inside a pyramid-shaped monument the artist had originally designed for the remains of Titian.
Address: Campo di Frari, 30125, Italy
Hours: Mon - Sat 9am-6pm, Sun 1-6pm
Admission: Varies
Read MoreShow Less

Things to do near Venice