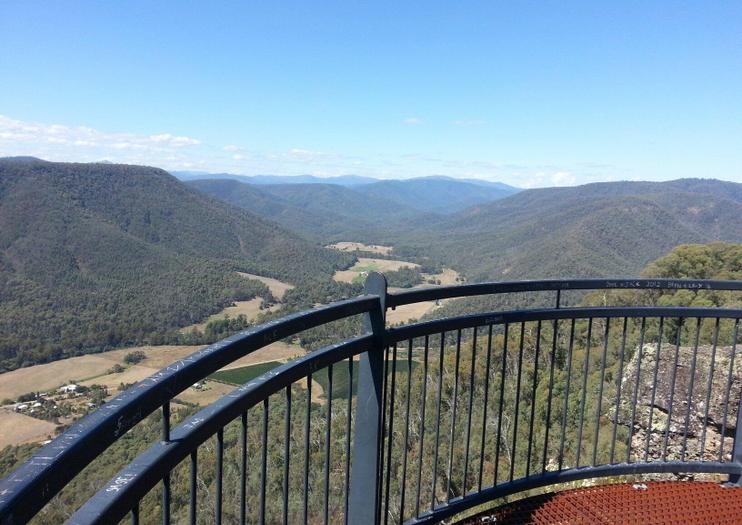 High in the hinterlands of northeastern Victoria above the fertile King Valley, Powers Lookout offers travelers a view that makes talkative folks go silent. This mountainous area is notorious as being the holdout of Australia’s bushrangers—19th-century outlaws and bandits who lived a life on the run. One of those bushrangers was Henry Powers who was captured here in 1870, and who also served as an early mentor to folk hero outlaw Ned Kelly. When visiting Powers Lookout today, climb the steep, adventurous trail to reach the second lookout, or follow the steps to the hidden caves that are tucked in the rocks below. On clear days the view stretches out to the mountains across the valley, a few of which can possibly be snowcapped in winter and early spring. While the view is one of Victoria’s best, this isn’t a site you’d specifically visit on a journey all the way from Melbourne. Rather, if you happen to be in the Whitfield area—perhaps en route from Canberra—the short detour to Powers Lookout offers vistas you’ll never forget.

Powers Lookout is located down a dirt road off the Mansfield-Whitfield Road. The dirt is well graded and even vehicles will lower clearance should be fine. The first lookout is 100 yards from the parking lot, and the second lookout requires a 300-yard hike up a steep section of steps. There’s no admission fee to visit the site or official hours of operation, and the lookout is located three hours from Melbourne near Alpine National Park.
Address: Mansfield-Whitfield Road, Whitfield, Victoria, Australia, Australia
Read MoreShow Less

Things to do near Victoria