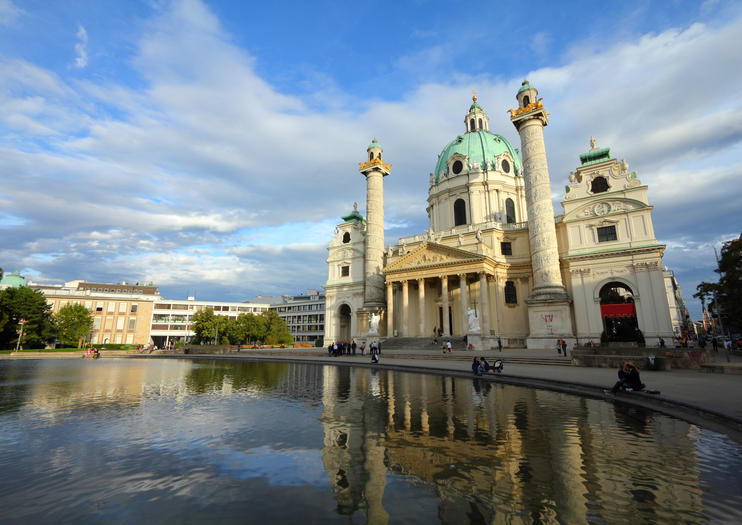 One of the largest squares in Vienna, Karlsplatz is dominated by the huge, baroque Karlskirche church, which was built between 1716 and 1737 with designs influenced by the architect's visit to Rome. The square is also well known for a pair of pavilions that were created in 1898 and 1899 by Otto Wagner and contain marble slabs and green-painted, wrought-iron frames that are decorated with gold-colored sunflowers and gilded trim.
The western side of the square contains the Secession Building, which is an art museum, and the Naschmarkt, which is Vienna's most popular market. The eastern side of the park is bordered by a park called Resselpark where you can find several statues of famous Austrians. Also near the square are several cultural institutions including the Musikverein, a concert hall that is home to the Vienna Philharmonic, and the Kunstlerhaus, an art gallery and exposition hall. The History Museum of Vienna is located on the eastern side of the square as well.

Karlsplatz can be reached from the Karlsplatz Ubahn station. Karlskirche is located at Kreuzherrengasse 1.
Address: Vienna, Austria
Read MoreShow Less

13 Tours and Activities to Experience Karlsplatz

Small-Group History Walking Tour in Vienna: The City of Many Pasts

22
Go deep into Vienna’s rich history on a 3-hour, small-group walking tour with an expert guide. Start your tour in the former seat of the Habsburg Empire, and hear about the city’s kings, queens and revolutionaries. Spot architectural and historic landmarks as you explore a pair of vibrant shopping districts. Learn about Habsburg religion and ritual at a trio of extraordinary churches, and see traces left by waves of invading forces from Ottomans to Nazis. Take in Vienna’s highlights and enjoy unique historic insights on the capital city.
…More
From
US$92,02
Price varies by group size
From
US$92,02
Price varies by group size

4
Discover the Art Nouveau designs that weave through Vienna’s architecture with a 3-hour tour of the city’s turn-of-the-century metro stations and buildings. Learn about the origins of iconic landmarks and the architects that created them; stroll from the pavilion at Karlsplatz to the historic Stadtpark station and Kettenbrücke station. Pause to take in the gilded dome of the Secession building, and learn the design philosophy behind a pair of apartment houses. Finish your walking tour by visiting two final stations, including a gem-like royal station built just for the Emperor.
…More
From
US$92,02
Price varies by group size
From
US$92,02
Price varies by group size

The idea behind this photoshoot is not only to have beautiful photos taken - but to do this while exploring and discovering what Vienna has to offer! With this in mind, I will bring you to explore around the city's historical first district, going through some of it's unique little streets, gardens and main attractions. Any favorite spots you might already know can also be added to our journey if you wish!
…More
From
US$652,43
From
US$652,43

Explore Vienna’s Art Nouveau design with a personal, expert guide on a 3-hour, private walking tour of metro stations and architecture. Enjoy the flexibility of a private tour as you discover the stories behind the buildings and monuments. Walk from the elegant pavilion at Karlsplatz to a series of Art Nouveau stations, and pause to visit a groundbreaking art museum and two apartment houses designed by Otto Wagner. Finish your tour at a pair of beautiful metro stations, including a tiny stop built just for the Emperor.
…More
From
US$347,13
per group
From
US$347,13
per group

12
Visit three of Vienna’s most famous Christmas market areas on this walking tour of Austria’s capitol city. Listen to your guide tell you holiday stories about Christmas traditions important to locals as you make your way through the streets. See popular attractions, such St. Stephen’s Cathedral and the Imperial Palace, and visit Christmas markets in Town Hall Square, Charles Square, and near Belvedere Palace.
…More
From
US$415,18
per group
From
US$415,18
per group
Face masks required for guides in public areas
Social distancing enforced throughout experience
Gear/equipment sanitized between use
Learn More
Taking safety measures

Lace up your running shoes and get ready to see some of Vienna’s most important landmarks – all while getting a workout in! You’ll start bright and early to beat the crowds and embark on the “Ring run,” one of the city’s most popular running routes, with an expert local guide by your side. As you run, you’ll learn about some of the buildings and landmarks you’ll be passing, as well as get the inside scoop on a few more of Vienna’s best running routes.
…More
From
US$47,45
From
US$47,45
Face masks provided for travelers
Hand sanitizer available to travelers and staff
Social distancing enforced throughout experience
Learn More
Taking safety measures

Private Half-Day History Walking Tour in Vienna: The City of Many Pasts

4
Go deep into Vienna’s rich history on a 3-hour, private walking tour with an expert guide. Explore the city’s iconic landmarks and local neighborhoods as you trace a route from the elegant Michaelerplatz to the culture-filled MuseumsQuartier. Learn about the legacies of Habsburg dynasties and the armies that have swept through the city; see 12th-century walls, humble churches and the soaring St. Stephen’s Cathedral. Discover the landmarks hidden within Vienna’s most fashionable districts, and enjoy the personal experience of visiting the city with a private guide.
…More
From
US$347,13
per group
From
US$347,13
per group

2
This is a very detailed local experience tour as it is efficient with timing and effective with the results of sightseeing. This amazing experience is a combination of tailored customer needs and high tech Electric Bikes by Bosch. Discovering how beautiful it is to visit Vienna with an electric bike and how many kilometers you can travel without the slightest effort so we are able to cover most of the touristic city attractions as well as hidden gems which only known by locals within short time. If you are looking for complete Vienna sightseeing activity ----> Book this tour
…More
From
US$60,84
From
US$60,84

It takes 2-3 hours to complete, do it whenever you wish - you select your own date and start time, no scheduling or reservation needed. 20+ challenges, games and enigmas to solve as you walk through this historic neighborhood.
…More
From
US$34,48
per group
From
US$34,48
per group
Face masks required for travelers in public areas
Face masks required for guides in public areas
Social distancing enforced throughout experience
Learn More
Taking safety measures

During the photo tour, the participants get professional photos of their trip to Vienna. The photos may be used for social media and private purposes and stand out from the masses.
…More
From
US$189,80
From
US$189,80

4
Experience the very best of Vienna on a 3-hour, private tour in a comfortable vehicle. See the architectural highlights of the city center, including Ringstrasse, Prater and the soaring spires of St. Stephen's Cathedral. Hear stories about the city’s kings, queens and revolutionaries, with flexibility to stop for photos of Vienna’s classic sights. Get beyond the city center to visit a soaring observation wheel, a baroque castle and the sprawling Schönbrunn palace while enjoying an insider’s perspective on Austria’s rich history and culture.
…More
From
US$414,00
per group
From
US$414,00
per group

Things to do near Vienna