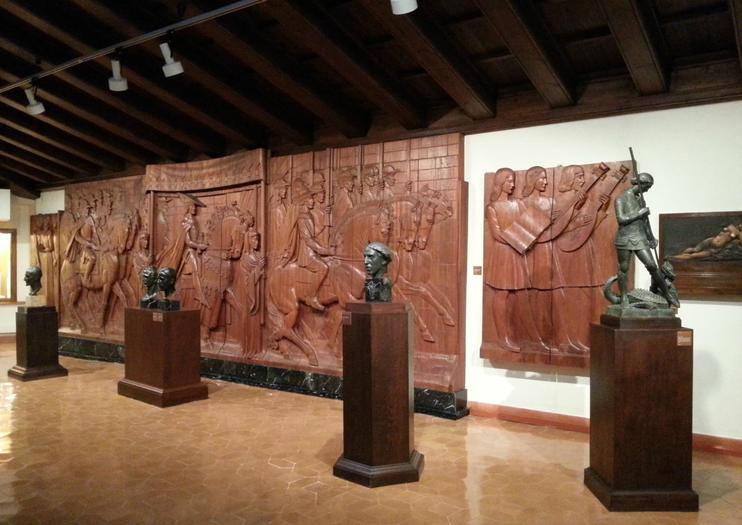 The quirky onetime abode of eccentric traveler Frederic Marès is now a museum devoted to his lifetime collection of artifacts—a fascinating space crammed with an eclectic array of curiosities. Opened by Marès in 1948, the Frederic Mares Museum (Museu Frederic Marès) was bequeathed to the city upon his death in 1991 and has become one of Barcelona’s most distinctive attractions.
The Basics
If you’re looking for a glimpse into the lifestyle of Barcelona’s upper class in the 20th century, the Museu Sentinel collection of clothing, accessories, toys, and smoking paraphernalia offers a unique perspective. Marès had a particular interest in medieval Spanish sculpture—a highlight of the collection. Visitors can choose a basic admission ticket to the museum or opt for a Barcelona Card, which includes entrance or discounts to several other top attractions and free travel on Barcelona’s metro and city buses.
Things to Know Before You Go
How to Get There
The easiest way to reach the museum, located in the Gothic Quarter (Barri Gotic), is to take the Barcelona Metro (line 4) to Jaume I station. The hop-on hop-off sightseeing bus also stops nearby.
When to Get There
The museum collection is open Tuesday to Sunday throughout the year, with shorter hours on Sundays and holidays. Visit on a warm afternoon to take advantage of the air-conditioning and enjoy a cool drink in the museum’s shady courtyard café. Admission is free on the first Sunday of every month.
The Man Behind the Museum
Born in 1893, Frederic Marès moved to Barcelona as a young boy, later graduating from the School of Fine Arts. He began sculpting as a young professor at the university and developed a specialty in monumental sculpture. After the Spanish Civil War, Marès spent much of his time restoring destroyed statues and buildings.
Dirección: Placa de Sant Iu, 5-6, Barcelona, Ciutat Vella 08002, España
Seguir leyendoMostrar menos