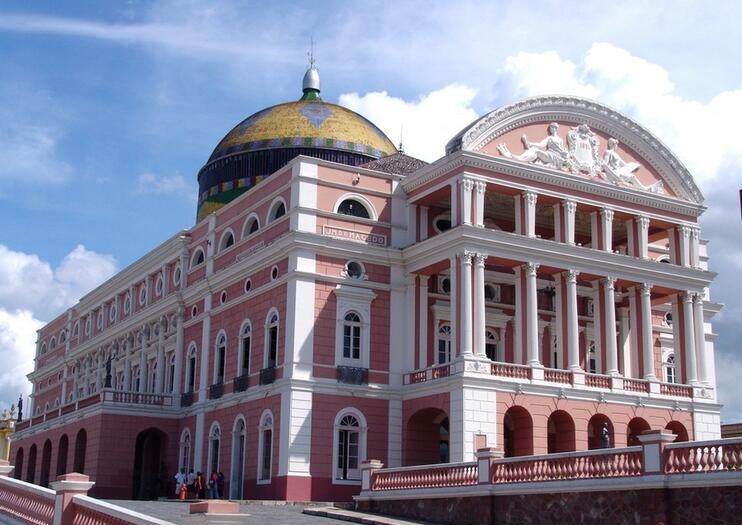 Much of Manaus’ wealth came from the rubber boom, during which it was the region's most-important port city. Manaus Opera House (Amazon Theatre) is a fine example of the Belle Epoque-style architecture that was popular during this epoque; the interior features some 200 Italian chandeliers and furnishings imported from Europe.
The Basics
Today, the 700-seat Manaus Opera House is home to the Amazonas Philharmonic Orchestra and hosts the annual Amazonas Opera Festival. To see inside, go on a tour of the theater when it's not in use or consult the schedule to check out one of the many free performances. As a major landmark in town, the exterior of the building is almost always featured on sightseeing tours of Manaus, including history tours that focus on the city’s rubber boom history.
Things to Know Before You Go
How to Get There
The opera house is centrally located and easy to get to on foot from many other attractions in Manaus. If you’re coming from further afield, take a public bus (destinations are listed on the front of the buses) or hire a taxi to take you there. Taxis are rather inexpensive and often much more convenient.
When to Get There
The best time to visit the opera house is when a performance is scheduled, though the building is worth a look at for its architecture alone. Buy tickets ahead of time in person or show up at least an hour early to secure a seat.
History of the Opera House
The Teatro Amazonas was built between 1884 and 1896, and the first ever performance was the opera "La Gioconda,” staged in January of 1897. When the rubber boom dwindled, the theater lost its wealthy patrons and actually shut down for 90 years. In 2001 the government invested millions in renovations to reopen the theater.
Dirección: Praça São Sebatião, Centro, Manaus, State of Amazonas 69025, Brasil
Seguir leyendoMostrar menos