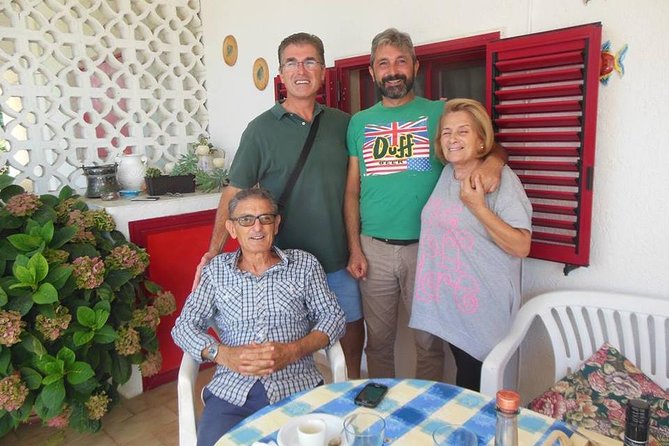 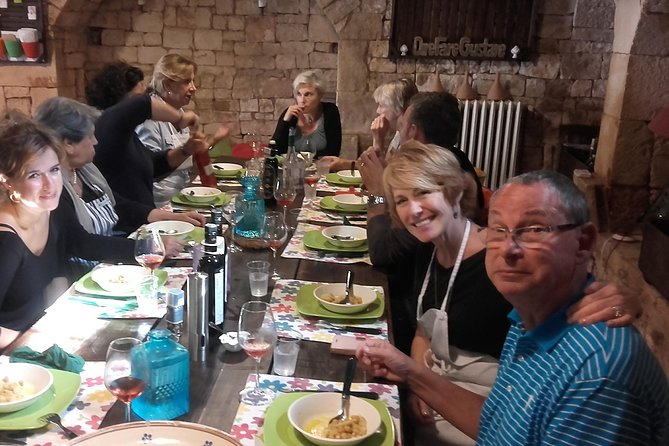 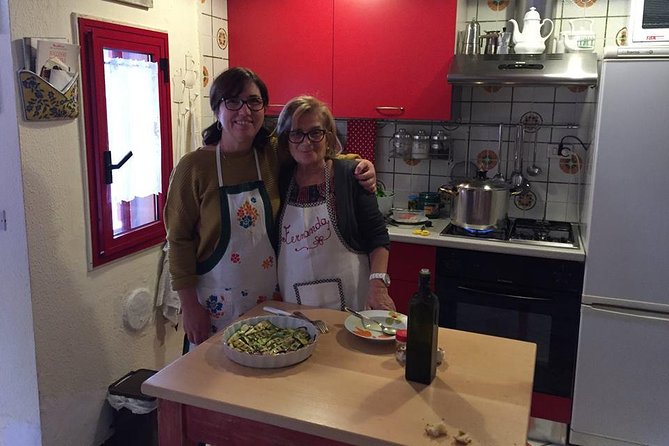 Fantastic tour..even if plans had to change

CarinaJ689
UNESCO's Alberobello and Matera from Bari | nov 2019
We had a great day with Vito. He was flexible as our ship arrived late so we agreed on a last minute change to visit Alberobello and Bari old town. We enjoyed setting the pace and priorities of our time. Vito spoke good English, drove safely and was very passionate and knowledgeable about the area.
… Leer más

Alberobello and Matera with Francesco

Y1453LGandrewp
UNESCO's Alberobello and Matera from Bari | nov 2019
We can not begin to say enough nice things about Francesco and his tour! He went out of his way to make sure he covered all the facts AND included authentic experiences like lunch with a local family which exceeded any expectations we had!! Truly I had tears in my eyes because it was an experience that I had yet to have on such a deep level and we’ve been in Italy for almost 3 months!! Thank you Francesco!! His English is impeccable as well :) would most certainly use him again as a tour guide!!!!
… Leer más

135irene
UNESCO's Alberobello and Matera from Bari | oct 2019
Francesco gave us a wonderful tour of 2 increíble cities. He Is very knowledgeable, caring and a Joy to have as a guide.
… Leer más

Great Tour With A personal Touch

tomdalbro1
Bari -alberobello-matera | oct 2019
What started out as a very interesting and competent tour of Matera with Marzia became something truly unique and memorable in Alberobello where we had the privilege to share pranzo in a trullo with the lovely Aquilino family and to be entertained on guitar with their very talented youngest daughter, Emanuela. Unfortunately, we were not able to get to Bari, probably because of the late hour, but our driver Giorgio, who took over from Marzia, provided us with a very interesting understanding of Italian religious practices.
… Leer más

26annieb2019
4-Day Puglia Sightseeing Tour Including Cooking Class | ago 2019
Thank you Vito for showing me the magic of Puglia. Your passion and knowledge are evident in the way you speak about your home. Will definitely have to come back.
… Leer más

"Living ancient times in Alberobello and Matera from Bari"

christelr336
UNESCO's Alberobello and Matera from Bari | jun 2019
I had a really great day tour with VITO who was very friendly, very competent concerning the two sightseeing highlights and open to discuss any topics of interest. I learnt a lot, and as summary I can say that good luck was with me to have VITO as my tour guide. I would recommend him to the very best friends of mine. If possible, please send him my regards.
… Leer más

The guide and the day were perfect...

The guide and the day were perfect!!! I'd highly recommend it to anyone!!!

Our 4 day Puglia tour with Vito was...

Our 4 day Puglia tour with Vito was exceptional from visiting Alberobello a UNESCO Heritage site, a private walking tour of old Bari, a private pasta making class and lunch at his family home, to the Bacilica St. Michele in the mountains and walking tour of Monopoli. Vito is not only passionate about Bari, but extremely knowledgeable about Italian culture and history. We loved our time with Vito and highly recommend this tour to others who visit Bari. Thank you for a most enjoyable trip!!!
Sue and Joe
Reno, Nevada

We had a lovely time on this tour...

We had a lovely time on this tour - Vito is a splendid guide, and the sightseeing/cooking class is a winning combination. The villages we spent time in were fabulous Alberobello with its wonderful trulli, and Matera's absolutely amazing cave dwellings. The cooking class was a great highlight - Vito's mother tried to teach me to make orecchiette. My technique completely lacked sophistication but we had great fun...and it was delicious! We had nice spacious accommodation on the top floor of ancient building in the old centre. Thank you Vito for taking such good care of us - and special thanks to your parents for their warm and hospitable welcome. Marie and George

The tour could be fun and...

The tour could be fun and informative if you join the tour with 3 or 4 people, don't join if there are only two of you , like we did.
Because the tour guide received order from two source, Viator and an agent from Berlin, who broke this trip into 3 part and sold separately Bali, Alberobello and Matera, Castel del Mounte, all with free pickup and return. Our guide Vito picked us up 8.30 AM, then went outside city to pick up a Dutch lady and return to our pickup spot 9.30Am to start the tour 1 hour wasted . We went to the Basilica of Nicola, where people were having a wedding ceremony, so lots of place not accessible. After half an hour we have another half hour free time when Vito leave us to pick up two guest from Argentina. We then start heading west the second part of our journey without the Dutch lady 10.30 AM we have seen nothing in Bali other than the Basilica . We arrive Matera before noon and head down Via Bruno Buozzi from the edge of the Sassi, where the Argentine want to have lunch, so we end up with another half an hour free time. We walk down Via Bruno Buozzi to Chiesa di San Pietro Caveoso for a short tour, then we head back to our car stopping only in a small shop within a cave, bypassing all the must see items in Matera according to Tripadvisor . We headed south to Alberobello arriving after 3.00 PM, the tour here was more thorough and informative, although its still a single street walking up and down, but at least cover most important sight there. Vito then took us back to Bali city center for the Argentine before heading north to Castel del Monte another hour lost in traffic , can't understand why its Unesco listed, there are nothing there worth seeing except for a photo outside its front gate, we did gone back to Bali 6.30 PM on time. Frankly speaking Vito is Knowledgeable and a very good driver, but to make up for lost time, doing 120 KM/HR on a 30 KM/HR dirt road, with constant overtaking and explanation in two language at the same time is way too much. Especially for someone sitting in front row like me. All in all Vito drive for more than 400 KM in a day when its only 250 KM if the tour goes Alberobello, Matera and Castel before heading back .

I have to break this tour into two...

I have to break this tour into two parts, the sites visited and the driver/tour guide. The sites are must see. Bari is a unique city on the coast. The history of the other sites an the tour is outstanding. They are everything you can imagine after reading about them.
The driver/tour guide on the other hand was terrible. As a guide he did now convey very much information about the history of the sites. He spoke at lengths of the present day situation in Puglia. As a driver he was dangerous. He was the worst of what you hear about Italian drivers. He hit speed of 150 km/h in 90 km/h zones, sometimes using his cell phone to show pictures of his sister. If he was not talking, he had the radio volume so high you could not ask questions and turned it down only if he wanted to make a comment. Much of the drives between sites was done with the radio at full blast. Perhaps we should have conveyed our feelings about these issues, but we were a long way from our hotel in Bari, and was not sure of his reaction.
With a competent driver/guide I would recommend this tour highly. It is a long day, but the sites are worth it.

Vito Maurogiovanni was our guide for...

Vito Maurogiovanni was our guide for this tour. Much to our surprise, we were the only participants, with the exception of two people who joined us for four hours one day. This private tour was outstanding in nearly every way. Accommodations were a comfortable room with modern amenities including free WI-FI in an ancient building just around the corner from the Basilica of San Nicolas. We took our traditional Italian breakfast of cornetto and coffee at the bar a few yards away. Quick to respond to my email request, Vito made sure we were able to check into our room the day before the tour arrived.

Vito was dependable, flexible, well-informed and passionate about Puglia. He rearranged our tour to deal with inclement weather and considered our interests and schedule. He is a colorful raconteur who loves his work! The itinerary did not disappoint and included notable and unique, including UNESCO, sites. We are glad to have included this tour in this Italy trip and can highly recommend Vito as guide.

This was an amazing tour that took...

This was an amazing tour that took us to many of the highlights of Bari. Our tour guide, Vito, presented the tour in an exceptionally interesting and informative way. Well versed on the Bari area. This was a full day tour that covered it all.

This tour was beautiful however we...

This tour was beautiful however we felt rushed at the end and would have liked to stay at Matera longer. I think it's too much in one day.
The guide was perfect person for the tour but I would recommend staying away from talking about politics with clients. Politics are a sensitive subject.