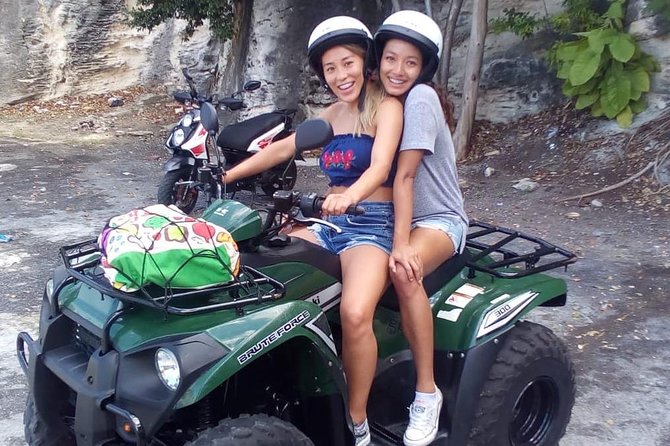 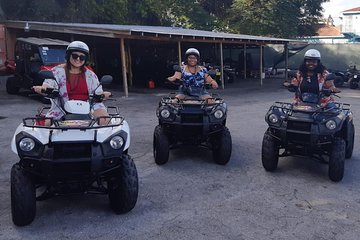 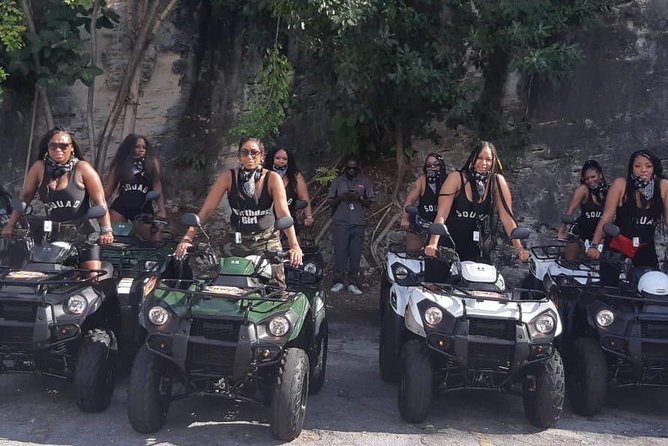 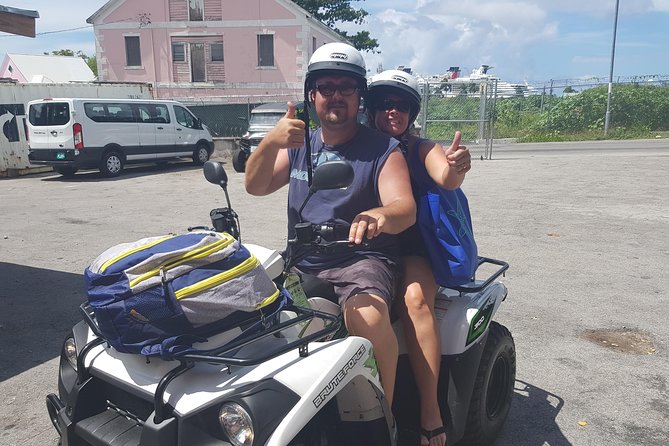 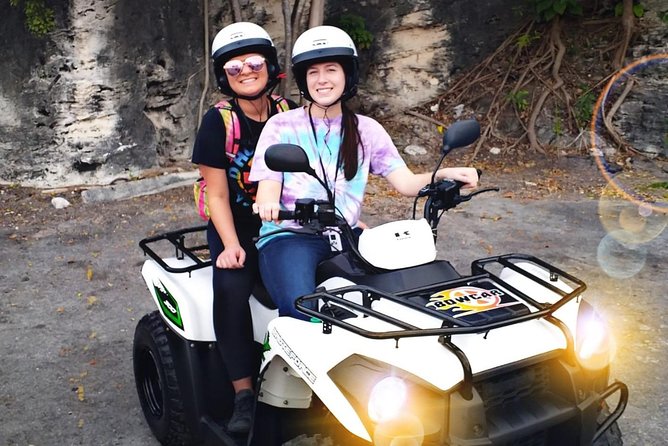 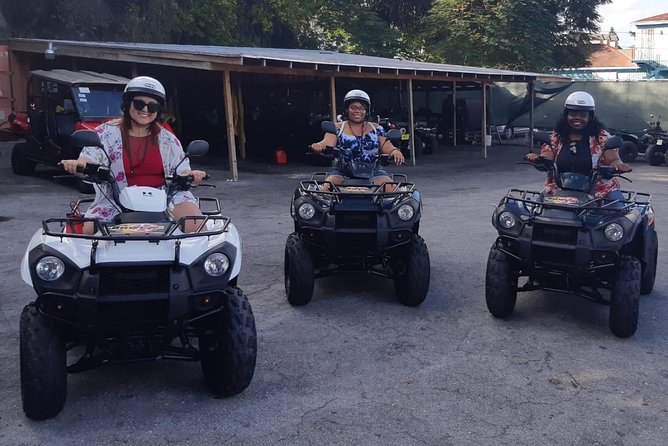 Lakeshia_W
Atv tour of Nassau | mar 2020
We love Sonia. She was the best tour guide to me and crew. She even was patient with our new driver. Thank you for all you do. Love from the ladies in Missouri.
… Leer más

What A Great Experience!!

kfavors
4X4 6-Seater Buggy Rental in Nassau | feb 2020
This is a great way to experience the island. The equipment was great and the staff was excellent. Would recommend to all.
… Leer más

sandybY7823AP
4X4 6-Seater Buggy Rental in Nassau | dic 2019
We did the self guided tour and had a great day. The machine was nice and the Staff was friendly and knowledgeable. They pointed in the right direction and away we went. If we did this again we would stay on the hotel side of the island or over the bridge. Wasn't much to see or do on the other side of the island past jaws beach. I would rent from them again
… Leer más

reen65
4X4 6-Seater Buggy Rental in Nassau | ago 2019
Employees couldn't have been more friendly or more helpful. Answered all our questions about what not to miss, where to go, how to get there etc. Been to Nassau twice before but saw the entire island for the first time. From 7 to 70, everyone in our party enjoyed it immensely!
… Leer más

jorbaden
4X4 6-Seater Buggy Rental in Nassau | jun 2019
They are so-noise you dont enjoy nothing I would not recomiendes at all. We gave it back after 2 yours.Imposible to en Joy
… Leer más

Great way to explore on your own

kimg533
4X4 6-Seater Buggy Rental in Nassau | abr 2019
We loved having the Jeep to explore Nassau and go to the places we wanted vs being stuck on a tour . We had no issues with the company and they were very helpful in helping us plan our route with a map as well as even escorted us to the main road. Would recommend use of this company!
… Leer más

Curious13939732834
Island jeep tour of Nassau | ene 2019
When we secured this reservation for the Island Jeep Tour months in advance, we booked and payed for the "Opened door Jeep/Buggy" for 4 people. 1 week prior to our tour, we received a call informing us that they had overbooked and asked if we were willing to change to the next day (Sunday) but we had other plans already in place for that day and were unable to change but was willing to move to Monday or Tuesday (& asked them to let us know) but we never received a call back so assumed we were good to go. However, when we arrived at the location, we quickly noticed that there were no Jeep/Buggies in the lot which raised our concerns but was told ours was on its way back form a tour (this was lie #1). A jeep did arrive but it was a workers personal wrangler two door jeep & was not returning from any tour. At this point, we just went with it since the lot had no jeep/buggies available. We soon found out how inconvenience this Jeep Wrangler was. Each time we had a stop, we would have to lift & slide the seats up so my grown kids could get out which was difficult at each stop plus no leg room in the back unlike the open 4 door jeep/buggy would have provided that we paid for. Another concern were the headsets provided that you could not hear from very well making it very hard to hear the guided tour while on the drive-by part of the tour (not to mention how out of date and big they were). In the package they talk about 8 different place's on the tour, we only only stopped at three of them so a working head set would have been nice. I did get to a point and asked the guide what happened to the Jeep/Buggy we paid for? Surprisingly, he did tell us the truth stating that they had overbooked and your jeep went out with a different group that we had down for one jeep but they required two. When we got back to the lot, it was now full and saw the jeep/buggies lined up. I told the lady how disappointed we were about not having what we had paid for and this is where lie #2 comes into play. She stated that our Jeep/buggy was out for maintenance and have been unable to fix it for the last couple of days. knowing that we paid $500 for this tour, did not get what we paid for and was lied to throughout the entire process, I would not rebook with this group again.
… Leer más

Passenger58458316551
4X4 6-Seater Buggy Rental in Nassau | dic 2018
I called in to make the reservation. Explained I need accommodation for 3 in Free port. Some how they set the destination for Nassau. Had to call in to cancel still waiting on refund
… Leer más

Sunshine712292
Scooter Tour of Nassau | dic 2018
This was an adventurous day full of riding and sightseeing. i was the only one on a scooter (others were on quads or atvs) but it was a blast. got to ride in the crazy downtown city traffic, through various parts of the surrounding areas, along the coast. Even had some rain, but quide had van meet us after lunch when rain got too bad. Drinks and lunch and stops were great too. Fun day!! Highlight of my trip!
… Leer más

THE BEST excursion EVER!!!!

Latoya L
Island jeep tour of Nassau | jul 2018
This excursion was by far one of the best activities my group and I have ever encountered. All of the the employees, tour guide, receptionist, etc were unbeliveable amazing.They are such kind and helpful people. The tour was fun, imformative, adventurous and completely safe all in one! I highly recommend booking. You will have so much fun! Thank you, thank you, thank you for such an amazing time!
… Leer más

We had a wonderful time touring...

We had a wonderful time touring Nassau in our UTV. The gentleman named Kino was very helpful and even gave us a ride back to our boat! I highly recommend this excursion as well as this tour group.

Confusing booking, We were supposed...

Confusing booking, We were supposed to have for 4 hours, but because of the difference of Nassau time versus ship time we only had the vehicle for 3 hours. This should be stated more clearly in the booking process. Also although you are given a GPS, I was under the impression from the description that you would be given some directions regarding the sites you should visit, Our driver punched in the caves but that was it.

I think we would have been better off renting a car or asking a taxi driver for a tour.

Other than a slight difficult time...

Other than a slight difficult time finding the place to be after getting off our cruise ship, this tour was excellent.

The gentleman who helped us at the kiosk was friendly. He gave us a map of the whole island and then circled hot spots or sights he thought we would want to visit. We were then picked up in a minivan and drove about 3 miles away to where the UTV was. We rented 2 UTVs that day. They were in excellent condition. We were given a cell phone in case we had any problems. We were also given a GPS to help us get around. Everyone was very friendly.

We took the UTVs out for our full 4 hours. We stopped whenever we wanted and played in several spots. The UTVs have a top so we weren't stuck in the sun all day.

It was overall a great experience. I am so glad we did it and would totally do this again.

The people at Bowcar Rentals where...

The people at Bowcar Rentals where we picked up the UTV were great. We thought there would be trails. Not quite what we expected. The town was extremely crowded and we were told to just drive it on the roads (they drive on the opposite side) There was tons of traffic so we didn't take it far.