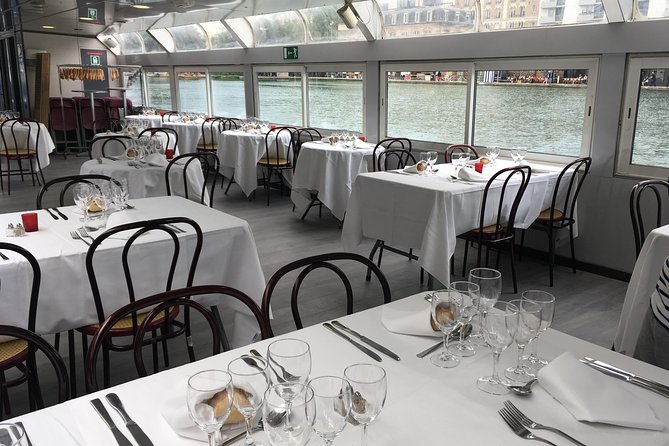 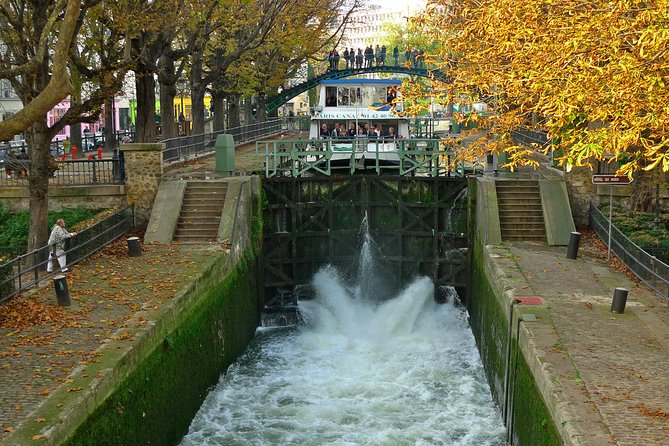 4,0
7 opiniones
5 estrellas
4 estrellas
3 estrellas
2 estrellas
1 estrella
Opiniones de viajeros de Viator
Nightmare - the Boat never turned up at the designated embarkation point.
kidzart
, sep 2019
We have been looking forward to this dinner cruise as a highlight of our Paris trip. A week before we flew to Paris we received a message stating that due to logistic trouble, the departure place had to be modified. Instead of leaving from Bassin de la Villette, the boat would now depart from and return to the Orsay museum. We were extremely disappointed as this obviously meant the cruise would be on the river, rather than the canal. However, 3 days before the date of departure we were delighted to receive another message asking us to ignore the previous advice, and that the Cruise was now departing at 7:30 from the original embarkation point at Bassin de la Villette. Last Friday night we travelled across the city and arrived at the designated pick-up point (behind My Boat Restaurant) at 7pm, expecting to see other diners waiting to board our boat. We stood on the waterside for almost 50 minutes with no vessel arriving. Not having a cell phone we were unable to call the number on the Paris-Canal notice board. As you can imagine we were furious and are still waiting to hear back from the tour company.
...MásMenos
Good value for money
Freedom54674572041
, jun 2019
It was not your usual dinner cruise , we saw parts of Paris not many tourists see. Meal was excellent, staff friendly.
...MásMenos
Vacances à Paris
c0ise38
, oct 2019
Excellent accueil avec le sourire. Un excellent guide. Des explications sur les monuments de Paris. Passer ces écluses ses ponts tournant. Vraiment une excellente soirée.Musique qui correspond à cette belle Soirée de navigation. Et des passagers qui ont danser. Le repas correct. Le verre d’accueil à revoir À recommander
...MásMenos
Dîner sur l'eau
fgardeur
, jul 2019
Soirée très réussie pour les 80 ans de notre amie. Personnel accueillant, très compétent. Une soirée inoubliable. Merci,
...MásMenos

A different perspective on Paris

Pdg
Seine River Cruise and Paris Canals Tour | feb 2020
The highlights of the cruise for me was the guide. He was extremely knowledgeable, informative and entertaining. He's a world away from the classic "on your left you can see..." guide. His English is outstanding. Sadly I don't know his name but if you're reading this, you know who you are... The cruise *is* a little bit long, as someone else pointed out. The first lock is exciting, but after a few it does get a little bit boring (if it wasn't for the guide of course). The underground bit is amazing! And the area around the canal st Martin is really nice. All in all, definitely recommended.
… Leer más

hemandrabinos
Seine River Cruise and Paris Canals Tour | nov 2019
The Seine River Boat cruise was great. The guide did his best to explain in both French and English. I found the trip through the canals fascinating. I wish the weather had been a bit better, but the boat was covered so we were sheltered from the rain. I highly recommend it.
… Leer más

SenorRobert
Seine River Cruise and Paris Canals Tour | sep 2019
very worthwhile trip down the canal and into the river Seine. We would do this again.Really enjoyed the commentary.
… Leer más

H3741FQjohnt
Seine River Cruise and Paris Canals Tour | sep 2019
Loved this cruise as it went off the beaten track. The canals and locks was the best part and the small group of people certainly helped as well.
… Leer más

JC-LaJolla
Seine River Cruise and Paris Canals Tour | ago 2019
We had a great time in Paris with one exception....the Seine River Cruise and Paris Canals Tour. The tour was relatively easy to find with the directions provided, but the boarding process was slow and took over 30 minutes (for a relatively small boat). We were expecting a relatively nice boat with comfortable chairs and glass roofs for viewing given it was a 2.5 hours tour, and it was anything but that....the boat basically is a converted barge with a plywood roof and wooden restaurant chairs lined up on the floor and a tiny outside area at the from of the boat That being said we were excited to see the canals and a different side of Paris, with the English tour guide...who in the ended up speaking in French for 90% of the time, with a small interruption to point something out in English. The Canal part is interesting through the first set of double locks, but then you realize that you have 3 more double locks and a single lock to go through so a good portion of the tour is going through the locks which you could do anywhere that they have locks. The tour would have been much better if if started at after the third double lock, as the neighborhood was more interesting and in all honestly seeing the side of steel walls is not that exciting. You do go through the 2km tunnel which oddly was the highlight of the tour, and is when the tour guide breaks out packages of Coca-cola, water and orange juice to sell (so if you go bring water/snacks). Once you exit the tunnel, you have one more lock to go through before you end up on the Seine river, and unless you are right nest to the window it is hard to see any of the sights (and this part of the cruise only accounts for about 15% of the time you are on the boat). In the end the cruise ended up taking 3 hours, which in most cases I would be excited about spending extra time, but all that we wanted to do was get off the barge.
… Leer más

lamourbern
Seine River Cruise and Paris Canals Tour | jul 2019
The cruise is extremely charming even if a bit slow due to the numerous sluices (9) on the canal. Of special interest: the 2 kilometer tunnel! The cruise was marred by an indigent animation: dreadful English (at least one major grammatical mistake per phrase) and more important, a bunch of untruths!!!
… Leer más

Marjorie H
Seine River Cruise and Paris Canals Tour | jul 2019
The ride was nice, the guide did well, there were just too many locks to go through. One or two is interesting but nine is ridiculous.
… Leer más

Matthew C
Seine River Cruise and Paris Canals Tour | may 2019
In my opinion the tour was boring, waste of time and money, uninspiring. You spend 2 hours in the canals in Paris. It's interesting for the first 15 minutes then it just become exhausting. Not enough chairs on the deck for half the group. If you were sitting inside on the folding chairs you would get all the exhaust fumes. The tour guide's English was very hard to understand and he mostly spoke in French. May be a interesting tour if you're a local but if you wanna see the beautiful buildings on the Seine do not waste your time. You don't even get near the Eiffel. Only spend 30 minutes of the tour on the Seine river.
… Leer más

Victoria Z
Seine River Cruise and Paris Canals Tour | abr 2019
The river part of the cruise was fine but the canal portion was wayyy too long and unnecessary. Tour was provided in both english and French. The tour guide had a thick accent and it was difficult to understand his English. Would recommend a shorter tour of the sein only.
… Leer más

Nomad63227965615
Seine River Cruise and Paris Canals Tour | abr 2019
The cruise did not happen, the morning was marred by insufficient information as to where to catch the boat and the afternoon cruise the boat simply did not appear. There was no way to contact the cruise operators.
… Leer más

Clustig
Seine River Cruise and Paris Canals Tour | abr 2019
Great way to spend a morning. Had a virtually private tour and got to see the St Martin Canal, and go through several locks. Learned about history the history of Paris and the significance of it's waterways.
… Leer más

Really enjoyed this tour didn't really like how many locks we had to go through but it was nice seeing other parts of Paris. It was a little challenging to find the start location but we managed. Well worth it with how much we paid.

Wonderful tour! We had a blast going...

Wonderful tour! We had a blast going through the locks and under the Bastille! The two man crew were very nice and accommodating! Seeing areas of Paris that are not on the usual tours was very nice!