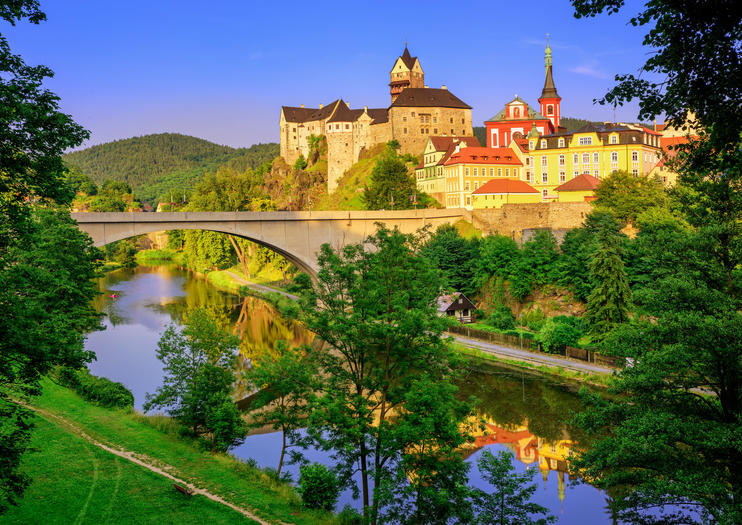 The austere towers and battlements of  12th-century Gothic Loket Castle (Hrad Loket) stands on a granite headland over a bend in the River Ohře and dominates the Western Bohemian town of Loket close to the peat bogs, pine trees and birch forests of the Slavkov Forest Protected Landscape Area. Originally built as a defensive fortress to protect trade routes from Prague, the castle became the favorite royal retreat of King Charles IV of Bohemia, who came here in the mid 14th century to enjoy hunting in the surrounding forests. Later in its life, Loket was occupied by several noble Czech families and between 1822 and 1948 was used as a prison. Today tours of its imposing interior include the torture chambers in the dungeons, where some extremely graphic instruments of torture can be spotted.
In the course of the 19th century, the town of Loket became known for its porcelain factories and today the castle displays a porcelain collection of exceptional quality, including Art Deco vases and rare spa cups used when taking the waters at neighboring Karlovy Vary. Other exhibitions dotted around its maze of rooms, cellars and dungeons include archaeological finds from the area and fine, faded pastoral frescoes in the first-floor galleries. A small armory occupies sections of the Romanesque tower, where according to legend a friendly dragon has lurked for centuries.
Dirección: Zámecká 67, Loket, Western Bohemia, Czech Republic 357 33
Seguir leyendoMostrar menos