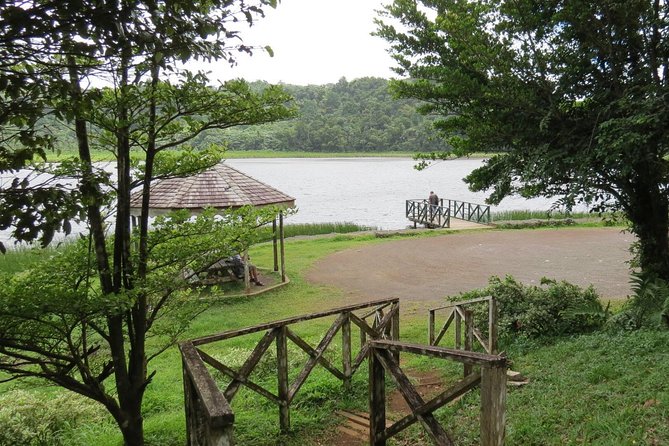 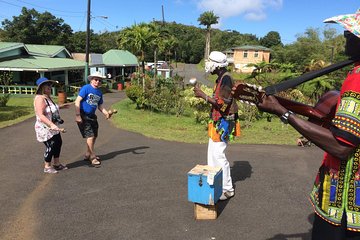 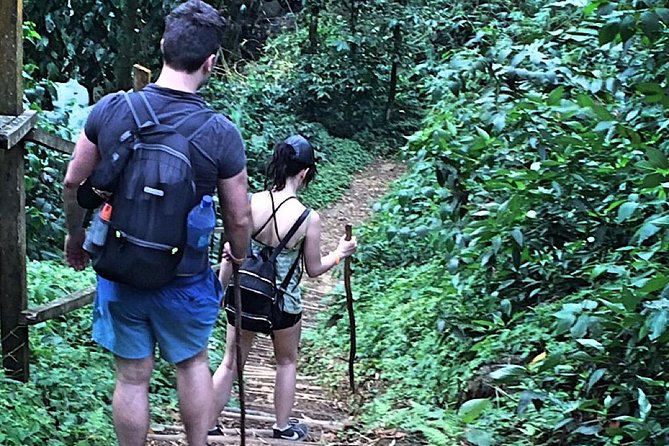 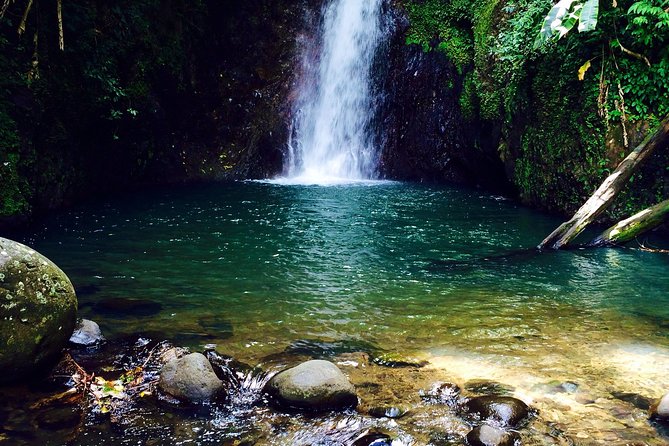 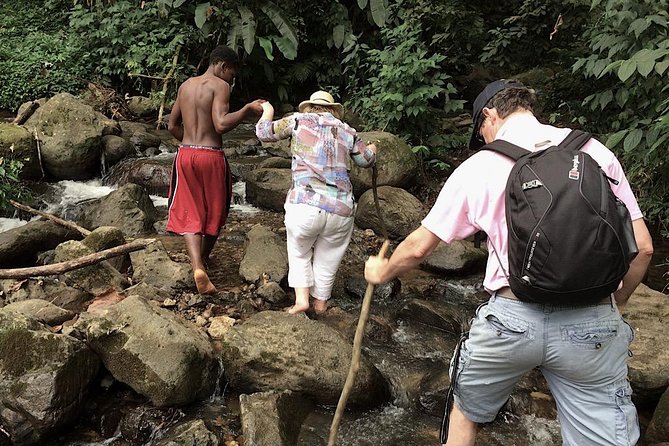 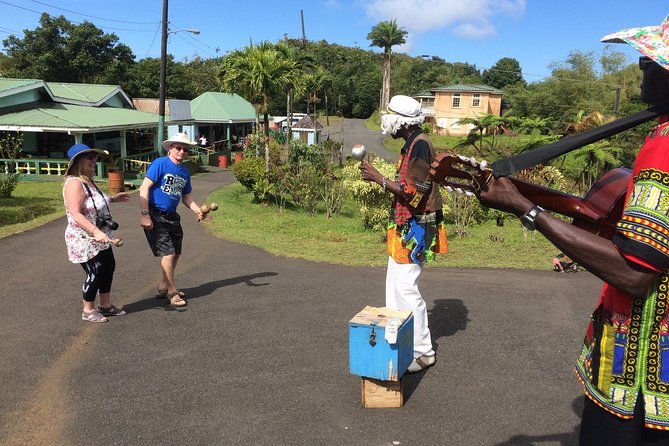 5.0
1 opinión
5 estrellas
4 estrellas
3 estrellas
2 estrellas
1 estrella
Opiniones de viajeros de Viator
W were picked up on time from our...
V G
, dic 2017
W were picked up on time from our hotel and driven to the National Park where we walked through the rain forest to a waterfall. There we could swim and take photos. All the while we were informed about Grenadian life. We were also given a personal introduction to the monkeys who were lured out of the jungle with fruit. We went to a picturesque lake before being driven around St Georges to see the main sights and around the south of the island. We stopped at a brewery to sample some of the drinks brewed there.
...MásMenos

Make sure you have a driver and guide

Charles_H
Half-Day Scenic Driving Tour of the Grenada West Coast | mar 2020
this 51/2 hour tour was actually three hours. We were on a cruise and we only had three people on the tour. We had only a driver and he was not a guide. We never got to see some of the advertised sites such the chocolate factory and were told it was too long a drive etc.
… Leer más

Bruce_G
Private Tour: Grenada Photo Safari | mar 2020
On booking the tour we had requested a wheelchair-accessible van, but they could not locate one to use, so we were delighted on arriving to find Justus there with one. He gave us an excellent tour in the amount of time we had allotted. The island is beautiful lush and mountainous with very friendly people although a poor island.
… Leer más

pagetg
Annandale Waterfall Fort Fredrick and Beach Time at Grand Anse | ene 2020
This is hard to review because Tony gave us a nice tour with good info. but it was just 2 hrs instead of 4 and we didnt get to the Falls. Just passed by the fort & the beach (that was OK, a drizzly day) so it really wasnt what we expected & paid for. We emailed in advance that we were limited in time so he picked us up at 8:30 & we discussed needing to be back on board by 1:30, but somehow we were there at 10:30! Nice to learn about the medical school but didnt need to see it or the nearby residential neighborhood.
… Leer más

annwing2019
Annandale waterfall, Fort Frederick and Return to cruise ship | ago 2019
Nothing to see. Long drive time from the cruise terminal. Driver & guide drove very slowly to kill. Carnival parade in progress also slowed traffic in capital, St George. He also drove slowly from Fort Frederick & Annandale Falls sites to kill time. Guide said admission prices to both sites not included. Voucher given by Visions Tours Grenada vendor stated admission fees were included. Guide did not say there was a tunnel tour beneath Fort Frederick as he stayed in the car.
… Leer más

COLIN H
Annandale Waterfall Fort Fredrick and Beach Time at Grand Anse | abr 2019
we were shown around the island by TONY, who was an excellent guide, and great conversation. He took us to some lovely spots, would full recommend this trip with him.
… Leer más

Good driver, tour not so good

cabbage4histea
Annandale Waterfall Fort Fredrick and Beach Time at Grand Anse | mar 2019
Waterfall not really worth visiting - wasn't much to see and you can't go in. You can pay some locals to jump in, but not worth it. Fort had fabulous views, but again, not much else. Beach was fabulous though. Driver Nigel was really friendly and informative.
… Leer más

Excellent tour of the West coast

Storyteller794844
Half-Day Scenic Driving Tour of the Grenada West Coast | dic 2018
Tony is a terrific guide. Born in Grenada and raised in the UK, he is well educated, interesting and knowledgable. Has a wealth of life experience including time working in the special forces. We expected a group tour but were very pleasantly surprised when we were met at the cruise port for a private tour with Tony. You won't and can't see the entire island in 4 hours, but we found the time adequate for our needs. At times it seemed a bit rushed as Tony attempted to be ahead of large group tour buses which would have slowed our trip considerably. We very much enjoyed Tony's enthusiasm and knowledge and would gladly book again with him should we return.
… Leer más

Discover710868
Annandale Waterfall Fort Fredrick and Beach Time at Grand Anse | nov 2018
Our cruise ship did not offer an excursion with exactly this itinerary; so, we chose this Viator tour. We were the only ones on this tour. Our tour guide Angril(?) was prompt, courteous and flexible. The waterfall was moderately interesting, the view from Fort Frederick is stunning and Grand Anse Beach is wonderful.
… Leer más

We LOVED Grenada. Tony was...

We LOVED Grenada. Tony was fantastic, very clean vehicle, well air conditioned and he really knew his way around the island. The 2 hour tour of the island was just enough and Tony was extremely flexible. We did about a 1.5 hour tour, he dropped us off at the beach and picked us up a few hours later. On the way back to the cruise port, we stopped for some chocolate. I HIGHLY recommend using Tony.

We were a little nervous taking an...

We were a little nervous taking an independent tour off of our Windstar cruise, but Tony was right there waiting for us at the pier as promised. He put us right at ease and showed us around his beautiful island which he is calling home again.
The first stop was Annandale Waterfall. Tony briefed us on the various persons to expect along the walkway that would want a 'donation' for picture taking, cliff diving, etc. The Fall itself was smaller than we imagined, but we were told that on a hot day it felt wonderful to take a dip in the water at the bottom. While we were there, however, we were having liquid sunshine falling from the sky so no swimming for us.
The views from Fort Fredrick were amazing! Then Tony happily accommodated our desire to see St. George's University and the monument at the Airport honoring the Americans killed during the invasion in 1983. He also tried to surprise us with a trip to the local craft brewery, West Indies Beer Company, but because it was election day no alcohol was allowed to be served. Highly recommend that if you take his tour, you ask him to stop at the brewery. It looked very interesting with lots of craft beer choices and food!!
The last stop was our beach time at Grand Anse. We all shared a Ting at Umbrella's beach bar again no alcohol! and then Tony asked how long we would like to stay to enjoy the beautiful beach. No pressure and no rush!! He returned right on time and drove us back to our ship---taking time to show us two spots close to ship to pick up some local bottles of rum.
Highly recommend this tour---much better than anything the ship had to offer! Wish Tony had been available on a couple of the other islands :

Tony Phillip was the tour organizer...

Tony Phillip was the tour organizer thru Vision tours and he did an excellent job with communication concerning the tour. Esmond drove our small group van thru very windy, narrow roads and took good care of us. The waterfall was as described with natives approaching us for money to dive off of the waterfall. play the guitar, pictures with a monkey, and selling spice necklaces. The Fort had a nice view and the beach was lovely. Esmond was very accommodating about getting us back to the ship.

My husband and I thoroughly enjoyed...

My husband and I thoroughly enjoyed our tour with Tony. He was very informative and he made us feel at ease straight away. We were laughing the whole time. Would definitely recommend using this company and Tony to escort you round.

This was an excellent trip with an...

This was an excellent trip with an ex Royal Marine. As it was a Sunday there was little traffic which made the whole experience very pleasant. We went up to the lake first and had an experience with some very tame monkies. We visited three forts as well as churches and had a pleasant drive round. This is an excellent tour that gives some contrast and plenty of history. Tony our guide driver and owner was helpful and informative. Well worth the visit

Tony was informative, courteous and...

Tony was informative, courteous and really good fun. He kept me informed of all pick up details and got us to the falls before the cruise ships had off loaded. This was great as Britannia was in and Grenada is only small. He took us to places that the cruise ship trips couldn't. There was a group of 6 of us and he really looked after us all making my friend's birthday really special for her. The beach he took us to at the end was lovely and the rum punches at the quay were really strong!!! Thank you Tony.

Good tour. Lovely small group of 6. Guide very knowledgeable. Gave us the choice of how long at the beach. Very enjoyable. Recommend.