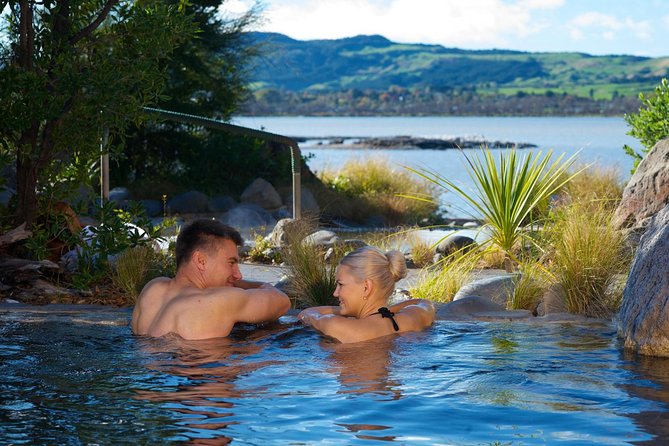 Guide was knowledgeable and friendly

Passenger452791
Tauranga Shore Excursion: Rotorua Geothermal Wonders | ene 2020
Easy to find the guide on the pier. Met us just as we came off the ship. It was almost a private tour as not many signed up. The geothermal park was great. I wish we could have spent more time there.
… Leer más

Sunshine56698609870
Tauranga Shore Excursion: Rotorua Geothermal Wonders | ene 2019
Our guide, Dave, was great. Very knowledgeable about the area and the nicest man you will ever meet. Day went perfectly as planned and we were back at the cruise terminal in plenty of time. Same itinerary as the cruise ship tour at half the price. I guess a lot depends on the guide, but our experience was 100% positive.
… Leer más

Enjoyable trip. Be prepared for some...

Enjoyable trip. Be prepared for some steam spray and , of course smell
Gordon

Well run tour. Our driver was...

Well run tour. Our driver was excellent giving all the information required. Rotorua was worth the visit with the natural wonders and local show was also good. It's a full day out but worth it

Roturua was a fun stop. Some good...

Roturua was a fun stop. Some good restaurants and we got lucky to run into a small fair near the government gardens. Gardens were pretty as was the whole area. Also stopped at a Kiwi farm and saw how they are grown. Very interesting stop with a cute gift shop there also. Guide was very good.

Geothermal stuff was interesting and...

Geothermal stuff was interesting and enjoyed seeing the Kiwi fruit farm. I never realized the fruit grows like grapes.

We booked tour p5 but we were with p2!. We were picked up at 10-30 first stop a kiwi farm we were not expecting this but it was ok.we dropped everyone off at 12-15 and we were taken to the town and left to buy a lunch because the driver needs a break it was 1-45 when we started our tour. We were shown sulphur pools which was good given a tour of the town which was later repeated for the others and taken to see the giant red woods, no mention of the blue lake no gardens unless the flower beds in front of the museum count. We were back to collect the other tour at 3pm so 1/14 hours that's what we got. When we were together we went to the falls which were also on the list. We feel we did not get the tour which we paid for, we are extremely disappointed.

We booked this excursion on Jan 4...

We booked this excursion on Jan 4, 2018. The voucher and subsequent emails all indicated a 10:00 am departure even though our ship was getting in around 7:00 am. We didn't question it since nothing in their emails indicated anything else. Well, we get off the ship around 9:15 and walk to the meeting location. Since it was early, we weren't too concerned when we didn't see anyone there. We asked a few other tour operators and they said to just wait where we were. As it got closer to 10:00 am, we started to get concerned when we didn't see anyone from this tour company. We asked another local guide to call the phone number we had and we were finally able to get a hold of someone after several attempts. Well, surprise - they left at 9:00 am. Apparently, an email was sent sometime in DECEMBER notifying people of the time change but they NEVER changed it on the website. Thankfully, David from Royal Coach tours was going to be heading in that direction and offered to take us there with another couple that was going. They notified the drivers that we were on the way but when we got there, we had to look and wait for the driver to come an get us so we could get in and finally start our excursion. VERY disappointed in how this was handled. We never received an apology and they kept saying how it wasn't their fault...they are only the drivers. While the geothermal springs were very nice and we had a great guide, the fact that we missed the whole first portion of this trip was very unprofessional and poorly handled. Again, thankful David was there to help us out or we would have missed this entirely.

This was a very enjoyable day...

This was a very enjoyable day starting with a drive through the countryside and a visit to a Kiwifruit farm. Tasting of the fruit and juice and information on their production. From there we continued onto Rotorua. We visited the beautiful gardens and viewed the historic buildings. Then onto see the Geothermal wonders and a cultural show. The show was well presented and then we walked around the park viewing the various mud pools and geysers. Spectacular. A full day but back in plenty time for our ship's departure.

Our trip left an hour earlier than...

Our trip left an hour earlier than we were advised. We did not have phone reception so even though the agent tried to call that was of no use. Karen the tour operator was very off hand and really unhelpful. She wanted us to upgrade to a tour which we had already done. Anyway, after paying more money, another driver took our group of 4 as I had booked 2 separate tours and both had left an hour early!!!. I am very disappointed with this experience. Martin the driver of our tour was very good.

It was a great day.Driver interesting...

It was a great day.Driver interesting. Scenery was very good

The trip was really disappointing...

The trip was really disappointing .
The Maori show was very artificial and it was on a continual loop running every 1/2hour .
The wood carving and weaving which I was really interested in was not hands on and Was paid lip service to .
The thermal spas themselves were a sight I'd never seen before but again disappointing .
Didn't see any wild life .
The cafe was quite limited
A long way and expensive trip that was tiring and uninspirational .
Purely a money making centre with no real soul

I wasn't that impressed with the...

I wasn't that impressed with the Mauri show! Didn't have much luck seeing a Kiwi at the Kiwi house.
Otherwise it was a very good tour and the driver/guide did very well.

Excellent tour from the cruise ship...

Our Maori guide was very informative...

Our Maori guide was very informative about his people's history and place in Rotorua. We were also presented with a Maori show of song, dance, and battle preparation. Those in the performance were outstanding. It was an excellent way to enter their country.