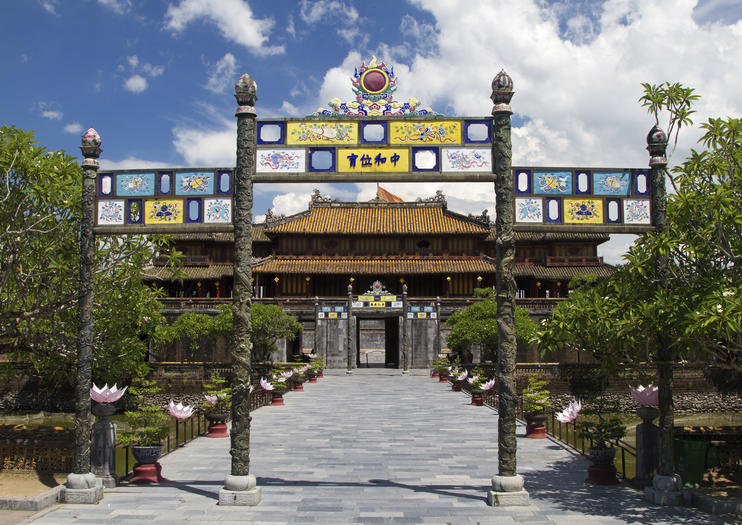 Formerly used to host the receptions and ceremonies of Vientamese emperors, Thai Hoa Palace dates back to 1805 and is notable for its lacquered columns. Plus, due to the palace’s innovative design, if you stand at the exact center of the courtyard you can hear whispers from anywhere in the building.
The Basics
Thanks to a prime location beside the entrance of Hue Citadel (Da Noi)—the top historical attraction in Hue—the palace features on plenty of sightseeing tours. Highlights of the complex include the Trung Dao Bridge, Thai Dich pond, and Great Rites Court.
Explore top historic sites Vietnam’s imperial capital on a day trip from Da Nang or Hoi An, most of which travel via the Hai Van Pass and tend to include a boat ride on the Perfume River (Song Huong River), or enjoy the undivided attention of a guide during a private walking tour that focuses entirely on the history of Hue.
Things to Know Before You Go
How to Get There
As Hue doesn’t operate a public transport system around the city, the easiest way to reach Thai Hoa Palace is by taxi or tuk-tuk—from the train station, the palace is a 20-minute walk. In order to skip the hassle of arranging your own transport, opt for a tour.
When to Get There
The palace opens from early morning until early evening in both summer and winter. Hue is hot and humid throughout the year, so try to arrive at the palace as early as possible in order to beat both the crowds and the midday heat.
Historical Highlights of Hue
Hue is a mecca for history buffs, who flock here from around the globe. Historical highlights include Hue Citadel (Da Noi), a UNESCO World Heritage Site, and the former political and religious center of 19th-century Vietnam; the Tomb of Tu Dac, renowned for its verdant surroundings; and the Forbidden Purple City (Tu Cam Thanh), which sits at the center of the city’s imperial complex.
Dirección: Vietnam
Seguir leyendoMostrar menos