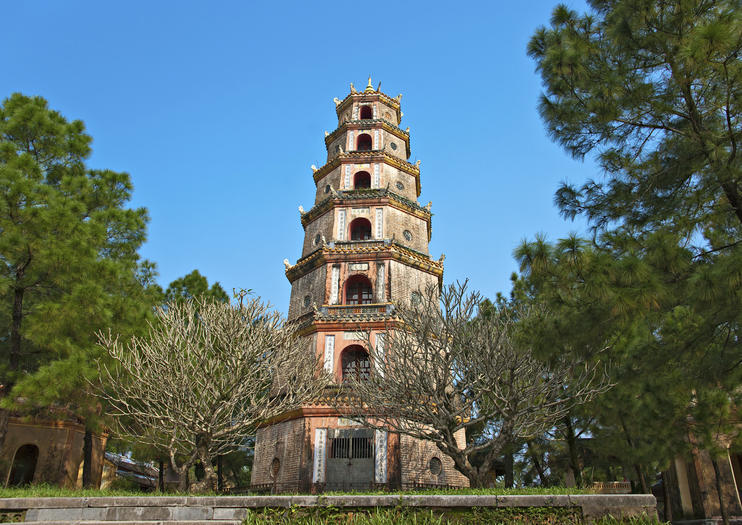 The 7-story Thien Mu Pagoda towers over the banks of the Perfume River (Song Huong River). The pagoda, which sits among the buildings of a Buddhist monastery, became known as a site for anticommunist protests after Thich Quang Duc, a Buddhist clergy member, self-immolated and brought attention to the plight of his people.
The Basics
The Thien Mu Pagoda is most often visited as part of a half- or full-day tour of Hue, departing from Hoi An or Da Nang, or from the city of Hue itself. Most tours combine the pagoda with a visit to the UNESCO-listed Citadel (Da Noi) and the Forbidden Purple City, while others include a Vietnamese cooking class or a sunset boat ride on the Perfume River. Exploring with a guide will enhance your experience.
Things to Know Before You Go
How to Get There
Located on the road that runs parallel to the Perfume River, the Thien Mu Pagoda is easily reachable by taxi, scooter, or bicycle. Skip the expense of booking multiple taxis or hiring a car by opting for a guided tour that includes round-trip transport.
When to Get There
The best time to explore the monastery is during the early morning or late afternoon, when temperatures have cooled and are more conducive to walking. Head to the pagoda in the evening to combine it with a sunset cruise on a traditional dragon boat.
The Rage of Thich Quang Duc
Few visitors would think to make a connection between the Thien Mu Pagoda and the rock band Rage Against the Machine; however, the band used an image of Thich Quang Duc, the Buddhist monk who set himself alight in his car in condemnation of communism, to inspire the cover of an album.
Dirección: Kim Long, tp. Huế, Thua Thien, Hue Province, Vietnam
Seguir leyendoMostrar menos