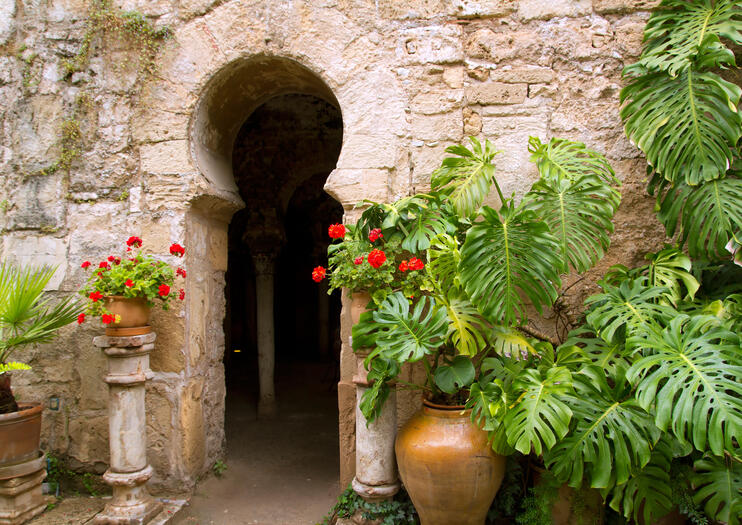 Dating back to the 10th century, the Palma Arab Baths (Baños Árabes) are among Palma’s most fascinating archaeological sites and some of the last remaining relics of the Muslim era in the Balearic Islands. It is believed that parts of the baths are the only remnants of the Arab city of Medina Mayurqa.
The Basics
Visitors can explore inside the ancient bathhouse, and although the small site is easy to cover with a short visit, it’s worth leaving time to stroll around the surrounding gardens, which are set in the grounds of the former Can Fontirroig estate. A popular part of historic walking tours and Palma sightseeing tours, a visit to the baths is often combined with the nearby La Seu Cathedral, Almudaina Palace, and Parque del Mer.
Things to Know Before You Go
How to Get There
Palma’s Arab Baths are located on Carrer de Can Serra, just behind the Museum of Mallorca. It’s easy to reach the Baths on foot from downtown; they are about five minutes’ walk from Palma Cathedral.
When to Get There
The baths are open daily year-round, although open times vary from season to season.
Architecture of the Palma Arab Baths
Believed to be the only existing ruins of the Arab city of Medina Mayurqa, the Palma Arab Baths are thought to have once been part of a nobleman’s estate. Built amid the ruins of former Roman, Byzantine, and Muslim structures, the Baths include two rooms—a caldarium and a tepidarium—with features including a domed ceiling, horseshoe arches, and a dozen columns.
Dirección: Carrer de Can Serra, 7, Palma, Balearic Islands, España
Seguir leyendoMostrar menos