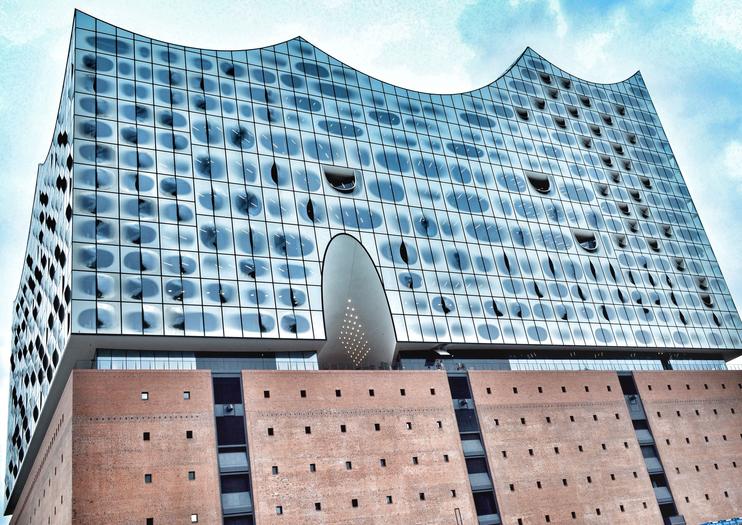 Opened in 2017, the Elbphilharmonie (Elbe Philharmonic) is a striking work of modern architecture on the banks of the Elbe River in Hamburg. Made with 1,096 individual glass panes, it houses two concert halls, as well as a hotel and residential apartments. The halls’ acoustics are considered among the best in the world.
The Basics
Aside from having a visually stunning exterior, the Elbphilharmonie maintains a diverse calendar of concerts ranging from classical to modern. With a free entrance ticket, visitors can ride the Tube, Europe’s longest and first curved escalator, to Elbphilharmonie Plaza, an observation platform with sweeping city and harbor views. Many walking and cycling tours of Hamburg—particularly its Warehouse District—now include a stop at the concert hall.
Things to Know Before You Go
How to Get There
The Elbphilharmonie is in Hamburg’s HafenCity neighborhood. The easiest way to get there is by taking metro line U3 to Baumwall or line U4 to Überseequartier. Buses 6 and 111 also stop nearby.
When to Get There
The Elbphilharmonie is open daily from 9am to midnight and is busiest on concert days. If visiting to see the observation plaza, stop by in the morning or early afternoon before the concert crowds arrive. Those attending a concert should plan to arrive at least 30 minutes prior to the start of the event.
The Acoustics of the Grand Hall
The 2,100-seat main concert hall at the Elbphilharmonie ranks among the most acoustically advanced in the world. The sound quality is so good in part because the hall is detached from the rest of the building, while 10,000 individually shaped gypsum fiber sound panels further soundproof the space. No one in the audience sits more than 99 feet (30 meters) from the conductor.
Adresse : Am Kaiserkai, Hamburg, Germany 20457, Allemagne
Plus d'infosVoir moins