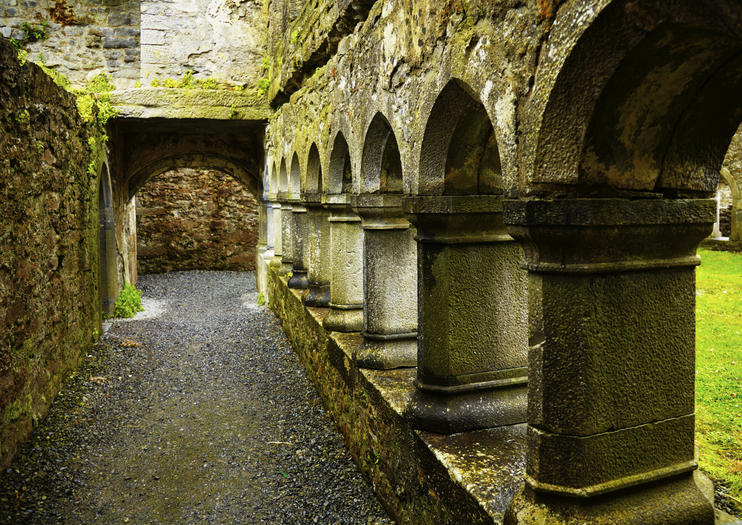 Set among green pastures, this 15th-century stone complex—once the home of Franciscan friars—now lies in ruins, peaceful and eerily empty, with tombstones dotted throughout the site. Inside, visitors can explore the roofless remains, including the church, cloister, kitchen area, and living quarters.
The Basics
Ross Errilly Friary, known as Ross Abbey to locals, is one of Galway’s hidden gems, with few tourists passing through the quiet, tranquil ruins. Some day tours around Connemara, departing from Dublin or Galway, stop at the friary en route to other more well-known sights, such as Kylemore Abbey, Killary Harbour, and the village of Cong, which is famous as the location where the John Wayne classic The Quiet Man was filmed.
Things to Know Before You Go
How to Get There
Ross Errilly Friary sits on the border between County Galway and County Mayo, and is a 30- to 40-minute drive from Galway City via the N84. Public transport is scarce in this rural part of Ireland, so if you don’t have access to a car, it’s best come as part of a tour.
When to Get There
Ross Errilly Friary can be visited year-round. The site doesn’t attract large crowds, even during the peak tourist months of July and August. One of the best times to visit is late afternoon when the sun sinks lower in the sky, creating a soft, golden light that’s ideal for photographs.
The History of the Friary
Most likely founded during the 15th century, Ross Errilly Friary was home to a community of Franciscan friars. The friars would have lived a tenuous existence at Ross Errilly, under near-constant threat of eviction, persecution, and attack, usually by English authorities. The turbulent politics of the period would have forced the friars to flee and return to the site several times, before their final departure in the mid-18th century.
Adresse : Co. Galway, Ireland, Irlande
Plus d'infosVoir moins