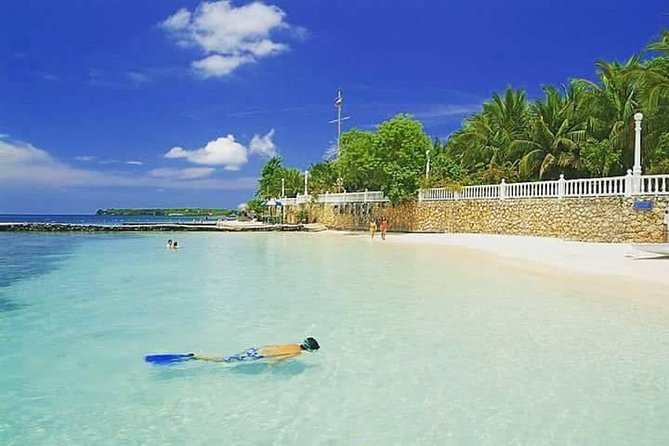 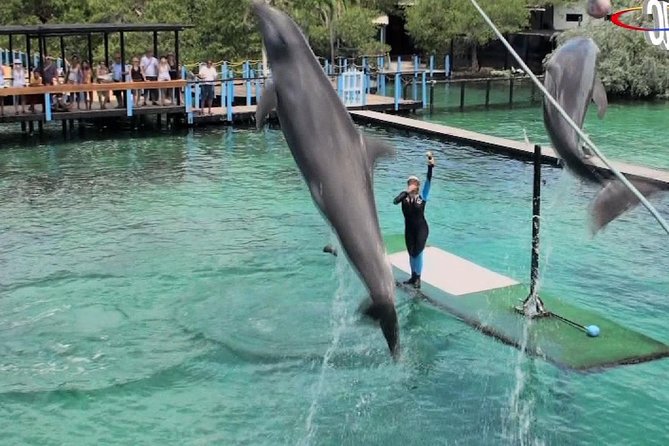 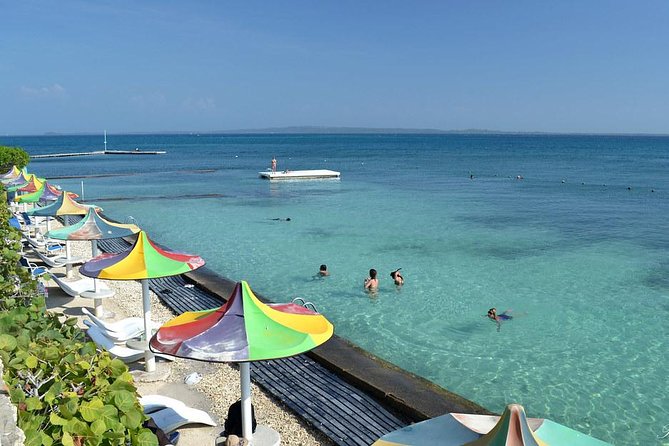 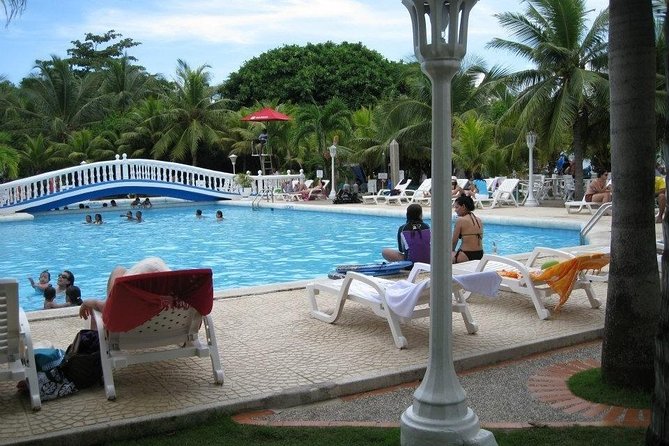 RadarHog
Cartagena City Shore Excursion | feb 2020
Our driver/tour guide met us at the exit from the pier. From the first Manuel was a professional. We enjoyed the monastery, Could have skipped the fort. And we delighted in walking Old Town. Manuel's knowledge of Columbian history is outstanding. After the official part of the tour was over we asked Manuel to take us to a local restaurant. He nailed it. Delicious ceviche and cold beer. We would do another tour a long as Manuel was the guide.
... Mostra altro

Padres2004
Cartagena City Shore Excursion | feb 2020
Found the rep for the tour easy after exiting the cruise ship. Manuel our driver was very informed and gave us excellent facts about the history of the city. Good air conditioned car was used which was very important because it was hot. Private tour is the way to go due to ability to see more and jump in and out of car to take pictures instead of being on a bus.
... Mostra altro

kdsnyder66
Cartagena Local Market Tour and Cooking Class | gen 2020
The best thing we did in Cartagena. The market was interesting and our guide was very helpful even stopped to buy our bottles of beer for us so that we wouldn't pay too much. The lunch was great and have even made some of the things we helped prepare once we got back home.
... Mostra altro

sabrinagiacalone1992
Street Food Tour of Cartagena | gen 2020
I LOVED this street food tour of Cartagena! Make sure you go on an EMPTY stomach, because I was SO full halfway through the tour that I couldn't fully enjoy the rest of the food, but I ate a snack before we started. Our guide was excellent in explaining all the traditions behind each "dish" we tried, and he even offered other options for people who didn't like seafood or some of the options offered. You also get a good sense of the history and location of everything in the city. I recommend doing this maybe on the 1st or 2nd day of your trip to get yourself oriented with where everything is in the city.
... Mostra altro

JacqueP140
Street Food Tour of Cartagena | gen 2020
The tour itself was very good. Our guide was knowledgeable and fun. The frustration was that we booked a private tour for our family - arrived to find a tour of 16 people. We booked private because we were traveling with a three-year-old. Upon voicing extreme displeasure, our group was split in half so we took the tour as a group of 8. The others in our group were wonderful and we enjoyed the them and the tour, but feel it was a but overpriced to not be a private tour.
... Mostra altro

Jaye S
Street Food Tour of Cartagena | gen 2020
I can't say enough about how great this tour was/ Our host Cheo couldn't be lovelier and more knowledge able about Cartagena, the people, culture and food. This is a great tour for teens too. My two kids loved it. We were stuffed and tried so many yummy things. We also met another wonderful family on this tour. This is a great way to spend the sunset hours and eat dinner!
... Mostra altro

Stephen A
Cartagena Bike Tour | gen 2020
My family and I went on this tour the other day. This is handled through Sico Bikes located in the Old City near San Diego Plaza. They were very accommodating to our request for an earlier time due to the heat/humidity that day. Cartagena is very humid... and this is from someone who lived in South Florida 4 years. The bike tour is for someone who is comfortable with navigating heavy traffic on a bike. I found it quite exciting and fun, but if you aren't that type of person, you should choose a walking tour. You get to see a large part of the city and you get some information on each site. The guide provided a high level overview and not a ton of details which was fine with what I was looking for. Note that cars are flying around you most of the time, and you sometimes are on the sidewalks going around pedestrians. One of my teenagers had a hard time because they weren't skilled in biking. Overall I"m saying 4 stars. Some in my family suggested a 3 and others at 5...
... Mostra altro

liam4987
Cartagena City Shore Excursion | nov 2019
Our driver and guide provided timely pick up near the Cruise dock and used a very efficient route, despite heavy traffic, to visit La Popa Monastery with 360 degree of the City, then to San Felipe Fort & Castle, the old walled City with a short shopping visit to the Armory and a 45 minute walking tour and a drive through the modern Bocagrande area. This was all accomplished within 3.5 hours, which fit the limited time of our Cruise line. Our guide was very knowledgeable about the history of the City and provided an informative commentary as we drove and visited the various sites. Much better alternative to the Cruise line sponsored tours, which follow a "herd mentality" and emphasize shopping rather than an informative, scenic tour.
... Mostra altro

BrianRPaddler
Cartagena Local Market Tour and Cooking Class | nov 2019
Get a feeling for the daily lives for the majority of people in Cartagena through this tour. Food and all that is required to obtain, prepare and consume it speaks to a culture. The family who runs this tour are warm and sharing. The food was excellent. The experience fun.
... Mostra altro

bugbitz
Birdwatching National Aviary Cartagena de Indias | nov 2019
This is no wayside zoo for people's entertainment. They take in injured birds, nurse them back to health and release them if possible. If not possible they try to give them a life as close to what they could have had in freedom. The place is huge, with several different aviaries and in one we were met by a sassy bird in the double door situation, and as we left were met by an even sassier bird who refused to let my sister pass. It was hilarious. The sign pointed out that the birds may peck, which cracked me up because I volunteer in the Lorikeet Aviary at the Columbus zoo (Ohio) and those little buggers bite! There were so many birds, so much bird song, so much heat! And just when the heat was about to conquer you, there is a stand where you can buy ice cream and cold drinks and relax in shade before going on. There were no birds in little cages - all had a great deal of room and freedom in their various areas. The bird show was delightful and informative (but as the gentleman in charge regretfully explained, he speaks English and Spanish but not French). The birds were not under duress to perform - they actually didn't perform at all. They showed up on cue and then left. For instance, the host would ask "what is the world's fastest bird?" and the audience would answer "Falcon" and one would come swooping in and sit on a handler's hand. "Some birds are flock birds." he would say as a dozen or so Scarlet Ibis and their paler cousins came running in, knowing they would be fed. This was definitely a highlight of my trip - and how many places can you see a Harpy Eagle - which should be on your bucket list! One warning - you cannot take in bug spray (too dangerous for some birds) so spray yourself down in the parking lot.
... Mostra altro

roger k
Cartagena City Shore Excursion | ott 2019
Manual our guide was excellent. Took us to various sights of Cartagena. He knew all the short cuts and ways through the crowded streets of “old town”. Showed us new town the fort the monastery shops and versions restaurants. A great tour. Thank you Manuel & Viator
... Mostra altro

Jonathan C
Street Food Tour of Cartagena | ott 2019
We had amazing local street food on this tour. Our tour guide, Cheo, spoke good English and explained some of the history of Cartagena. He made sure we had plenty to eat. We ended up skipping the next meal since we were so full after.
... Mostra altro

A bit expensive but the city is very nice indeed

mariterekei
Cartagena City Tour | set 2019
I was a solo traveler with mobility issues. The guide was extremely helpful in accommodating my needs. I had a couple of problems when booking online, the major one that I there was no space to nominate my hotel for pick up. Also worrying was the ticket issued with no time given for the pick up. The guide was knowledgeable and polite. Despite the fact that I indicated clearly I was not interested in purchasing any emeralds or souvenirs, I was taken to a shop where I spent 10 uncomfortable minutes fending insisting emerald sales pitch. I would give this tour a 3 out of 4 in general.
... Mostra altro