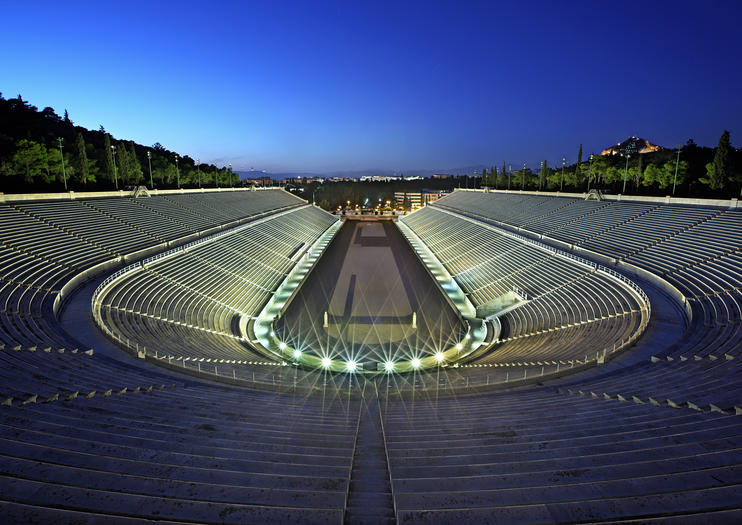 Originally built in the fourth century BC for the Panathenaic Games, Athens’ gleaming all-marble Panathenaic Stadium (Panathinaiko Stadio) was reconstructed for the first modern Olympic Games in 1896. Returning to its roots for the 2004 Olympics, the stadium was the site of the archery competition and the marathon finish line.
The Basics
Entrance to the Panathenaic Stadium includes an audio guide and access to a small museum exhibiting Olympic Games posters. Don’t miss the chance to snap your photo on the winners’ pedestal. Hop-on hop-off buses and many Central Athens sightseeing tours stop at the stadium and other top sights, such as the Acropolis, the Roman Agora, and Syntagma Square.
Things to Know Before You Go
How to Get There
The Panathenaic Stadium is located just southeast of the National Gardens of Athens (Ethnikos Kipos). Take the metro to the Syntagma, Acropoli, or Evangelismos station, then walk the short distance to the stadium.
When to Get There
The stadium is open to visitors year-round. The best time to go is in the morning or early evening, when temperatures are lower. Visitors can jog along the track in the early morning—just fill out the waiver available on the stadium’s website.
Where to Find the Best Views in the Panathenaic Stadium
Stand 21 offers some of the finest views of Athens’ ancient riches. Climb to the highest tier, and gaze across at noble sights such as the Acropolis, Philopappos Hill (Filopappou), the Temple of Olympian Zeus (Naós tou Olympíou Diós), and Mt. Lycabettus (Lykavittos), the city’s tallest peak.
Adres: Athens, Greece, Griekenland
Meer lezenMinder weergeven