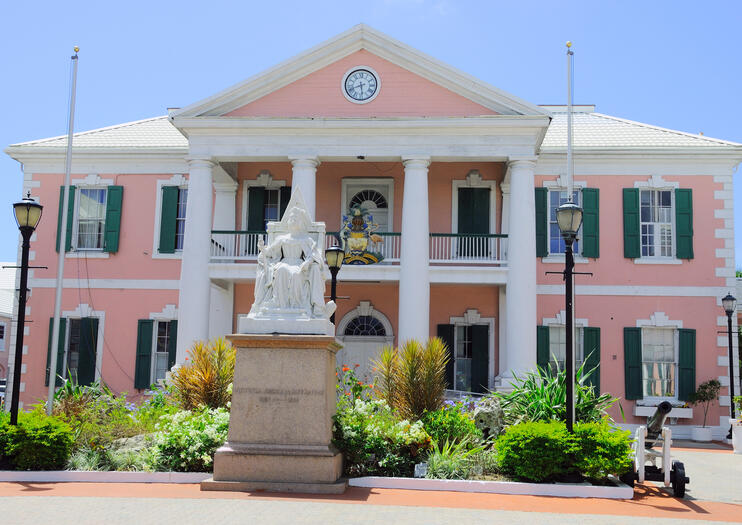 Built in 1801 on an estate on top of Mount Fitzwilliam, Government House is often considered the best example of Georgian Colonial architecture in all of the West Indies. The mansion is painted a vibrant pink with a bright white trim (a nod to Nassau’s famous conch shells) and is the residence of the Governor-General of the Bahamas.
The Basics
Visitors head to Government House to admire its facade, enjoy breathtaking views of neighboring Paradise Island, and see the changing of the guards at the gates, which takes place on some Saturdays. Government house is a regular stop on many city walking tours, including those that focus on the island’s history and culture, which also include stops at landmarks like Fort Charlotte, Fort Fincastle, and the Queen's Staircase.
Things To Know Before Going
How To Get There
Government House is located on Duke Street, between Baillou Hill Road and Market Street, in the center of Nassau. You can also reach the site on the public bus, or jitney, operates throughout Nassau everyday, and you can walk to the site from the cruise port in about 10 minutes.
When To Get There
You can admire the building and the view from the gate at any hour. The changing of the guards ceremony takes place on the second Saturday of every month at 11am. Nassau’s peak season is between December and May; during this season, you’ll have perfect weather, but attractions will be crowded. Hurricane season generally runs from June through November.
The Queen's Staircase
After visiting Government House, head to the nearby Queen’s Staircase. This landmark in the Fort Fincastle complex is a 102-foot staircase is made out of solid limestone rock that was carved by some 600 slaves using pickaxes and hand tools. The stairs took more than 16 years to complete and were later named in honor of Queen Victoria, who abolished slavery upon her ascension to the throne in 1837.
Adres: Blue Hill Rd & Duke St, Nassau, New Providence Island, Bahamas
Meer lezenMinder weergeven