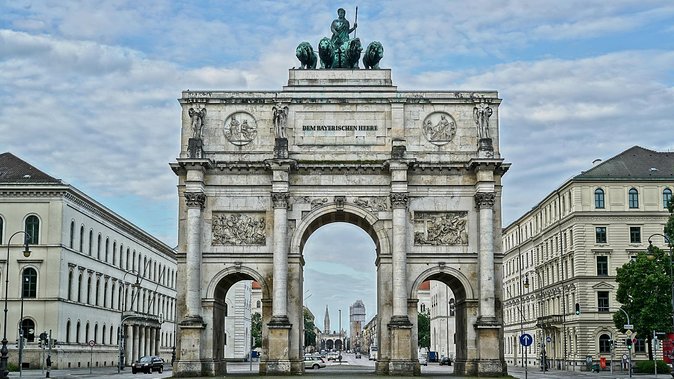 David_B
Frankfurt Public Walking Tour | mrt 2020
Alla was fantastic... she knew the city so well and the stories she told brought it to life. Would highly recommend her as a guide
...Meer lezen

hiltonmegan07
Bamberg Private Walking Tour | dec 2019
Ulrika graciously hosted me and my wife along with another couple we are friends with for a Christmas Eve tour. We walked along old canal streets, saw buildings from long ago, and learned the stories and characters behind them throughout the journey. Ulrika brought along an old city map and some pictures to add to her tour as well. The Christmas Markets and particular day of the year ruled out going inside a few places (old breweries, etc.). Overall, while a rainy and chilly day, the tour was pleasant.
...Meer lezen

Jeff B
Bamberg Private Walking Tour | nov 2019
Ulrike was great! Very knowledgeable and answered a lot of questions. Would recommend this tour for anyone who wants to learn about Bamberg history.
...Meer lezen

Kbarrett11-2019
Augsburg Private Walking Tour | nov 2019
The Augsburg city tour was excellent. Our tour guide,Sandra, was extremely knowledgeable about all the beautiful, historical sites and she went above and beyond to ensure we saw everything we hoped for... we would highly recommend having Augsburg on your list of destinations in Germany!
...Meer lezen

Ralph S
Leipzig Private Walking Tour | nov 2019
Friday, 8 Nov, we took the Viator “Leipzig Private Walking Tour”. Our guide was Christine. We threw her a curve by announcing at the start that we were musicians and wanted to see everything related in Leipzig. I think she had planned the tour to show us the role Leipzig played in the revolution to bring down the wall and unite the two Germanies that occurred in the eighties. This was reasonable since Saturday, 9 Nov, was the thirtieth anniversary of the tearing down of the Berlin Wall. Although we threw her a curve, she gamely tried to do both. Unfortunately, the weather did not cooperate, and the day became rawer and colder as time went on and eventually it rained. Another complication was that it was impossible to cover all this in a two-hour tour. Christine did go over time but had another tour scheduled an hour after ours was scheduled to end. It should be noted that the Leipzig Tourist Information Office has a self-guided music tour and a self-guided revolution tour with guideposts all over town. Nevertheless, she at least showed us where a lot of things were which we could return to at another time. You can’t expect much more from a two-hour tour.
...Meer lezen

Kathy C
Frankfurt Public Walking Tour | okt 2019
We arrived Frankfurt in mid-morning, so we decided to join an 2 hour walking tour. We met our tour guide in front of main train station, and found out only my daughter and I were going to the tour. She gave us history of Frankfurt and some famous landmarks. After 2 hours we said bye to her and we explore the city center. Nothing excited about the tour, next time we will bring our tour map..
...Meer lezen

stingeas
Dusseldorf Private Walking Tour | sep 2019
The guide did tell us in 2 hours all what we wanted to know about Düsseldorf in a pleasent way. He was good prepared.
...Meer lezen

Wander23855
Heidelberg Public Walking Tour | jul 2019
Other than not knowing exactly where to meet the guide, all was GREAT. I learned a lot more than I expected to and went back the next day to retrace some steps and take more pictures. Reading on line about history of the town also helped in understanding about what the guide was talking about as well. She was very good and really answered all questions the best she could. We only had a group of 5 since we were doing English, so pretty much personal group.
...Meer lezen

An excellent guide Karin is an experienced guide with detailed explanation. She led us into small beautiful backyards

Freedom37132145061
Lubeck Private Walking Tour | jun 2019
We fully enjoyed her tour and we highly recommend her. Lubeck is a beautiful historic town with many attractive small shops. The museums and clock towers are worth all the travel.
...Meer lezen

GoPlaces21523879148
Private Walking Tour of Old Town Heidelberg including Castle Visit | jun 2019
It was our first time in Heidelberg and Birgit made our tour absolutely amazing! She was a phenomenal guide and gave great insight into Heidelberg. Touring the castle was essential and a must-do for anyone going to Heidelberg. Would definitely recommend!
...Meer lezen

Magdalene E
Heidelberg Private Walking Tour | nov 2018
Francesca was an amazing guide!! Highly recommend! She was so knowledgable, friendly and gave us a wonderful tour of everything that was planned as well as some spontaneous add ons.
...Meer lezen