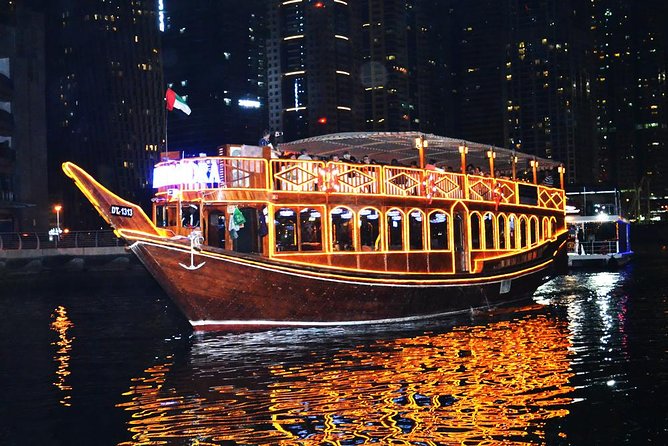 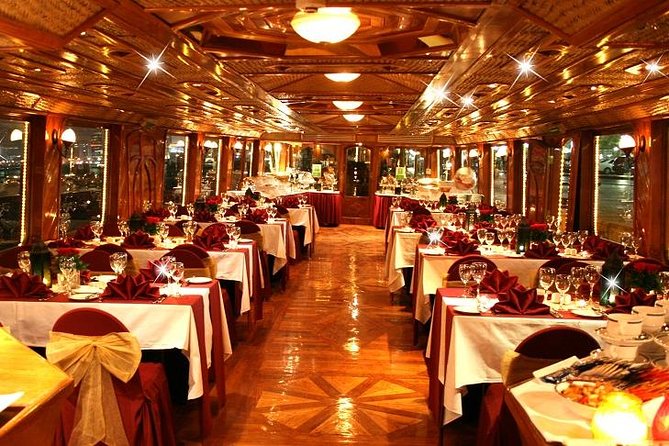 3,5
4 beoordelingen
5 sterren
4 sterren
3 sterren
2 sterren
1 ster
Beoordelingen van Viator-reizigers
Didn't really know what to expect on...
Peter F
, sep 2016
Didn't really know what to expect on this tour. Was wondering where we were going after a 45 min drive from downtown Dubai. Following drop off escorted to our dhow and seated. Cold drinks provided but no Comms as to what was happening. After an hours wait we departed throough a wall of lighted building.A great display. Dinner served in an orderly fashion - tasty and plenty of it. After an hours cruising turn and return on the same path - very few lights on display at this time as they must be turned off at 10.00 pm. Was an enjoyable trip but communications could have been better on board as to what the programme was.
... meerMinder
This dhow cruise was expensive...
SIDDHARTH S
, jan 2016
This dhow cruise was expensive compared to others and hence was expected to be of higher quality compared to other dhow cruises. The pictures suggested the same. However, it was a normal dhow cruise with no so great interiors and food. Look out for more economical options.
... meerMinder
En la información del crucero...
José Luis R
, mei 2018
En la información del crucero figuraba: duración de 3 horas. No llegaron a 2 horas. Pedí un segundo refresco, pero no lo trajeron. El paseo agradable, aunque tampoco era el barco que figuraba en la información. Muy masificado. Caos en la hora del buffet.
... meerMinder

Hills to go up and down in Antananarivo Madagascar

First-timers
BLUE HILL: Full-Day Antananarivo Discovery Private Tour with Ambohimanga | mrt 2020
Blue Hill day was excellent with our guide Jackie and the driver Tsiry: Ewerything went perfectly including travelling, guiding, having a very good restaurant for lunch and shops to buy souverniers. The guide could inform us so much and answered whatever we wanted to ask. Both Jackie and T-shirt spoke excellent English and kindly shared their knowledge and experiences. Thanks for all that!
...Meer lezen

laurenn1917
2-Day Private Tour to Ampefy from Antananarivo | jan 2020
Our guide was brilliant and he made our experience, although he spoke little English we made it work with a mix of french, English and Malagasy. He made sure we had a great time, and was very patient with the camera. We felt very safe, and an enjoyable time with him. The geysers are beautiful and so it the waterfall. The locals are so friendly and getting involved with our trip made it so special, although the vendors and the waterfall are bit much.
...Meer lezen

inr1965
Full-Day Andasibe-ANALAMAZAOTRA Special Reserve Private Tour from Antananarivo | nov 2019
This was a very good tour and we learned a lot. The lemurs were so cute! Perhaps the most memorable aspect was the drive through beautiful countryside. It's not a criticism of the tour guide but the Madagascar government needs to urgently improve the road east to the coast. To do would be very effective for economic development
...Meer lezen

Jim S
2-Day Private Tour to Ampefy from Antananarivo | nov 2019
Our trip to and from Ampefy was one of the best during our visit. RN 1 is arguably the best road in Madagascar and the falls and geyser were very beautiful. However, the accomodations left a lot to be desired. We are 3 friends and when when we made the reservation we expected 3 rooms or at least 3 beds. What we got was a bouble bed and a cot. We were forced to rent another single room so we each could have a bed. When we arrived for lunch at the Eucalyptus hotel we were sent down the road to a local Malagasy restaurant complete with animals begging at the side of the table and flies getting stuck in our drinks. The tour was beautiful but the accomodations were far from satisfactory.
...Meer lezen

chbnash
Full-Day Antananarivo, Ambohimanga and Lemurs Park Private Tour | nov 2019
Jackie picked us up on time and introduced us to our personal driver. She was very nice and very informative. She even bought us bananas from a street vendor when we were stuck in traffic!! I would highly recomend this tour!!
...Meer lezen

Roam659796
BLUE HILL: Full-Day Antananarivo Discovery Private Tour with Ambohimanga | sep 2019
Excellent tour. Had a really wonderful experience. Special mention needs to be made of the guide Faly, who was very courteous and went out of the way to provide any assistance. Very strongly recommended
...Meer lezen

KimAdventurer4
Full-Day Antananarivo, Ambohimanga and Lemurs Park Private Tour | sep 2019
This is a tour that encompasses the history, culture and wildlife in a snapshot. The guide we had for the tour was informative and allowed us plenty of time to enjoy our surroundings and ask plenty of questions.
...Meer lezen

Worst Tour Out of Hundreds Globally

Pat B
Full-Day Antananarivo, Ambohimanga and Lemurs Park Private Tour | sep 2019
We have taken local tours in 110 countries, many through Viator. This was the nadir, virtually fraud. The operator arrived two hours after schedule, changed the itinerary without consulting us, eliminated two of the three scheduled stops, including the highlighted national park, and asked if we still wanted the included lunch at 3:30 PM. They did not offer any relief or any apology whatsoever. They excused this as due to traffic, though I challenged this as we had taken other local tours from Tana before and after, with another company without any problems whatsoever (one of these during a papal visit). When I asked for a refund, they lied and said that everything had been delivered as promised, So, we paid $224USD for a $10 cab drive and a $20 admission to the only place we actually visited. Most of the tour was just sitting the back of a van while guide and driver chatted in Malagasy. Worse, when I complained to Viator, whom I have paid thousands to, over the years, they said that "all sales were final". This was not just a "things happen" incident (we've had and accepted those). This was a blatant cheat. I even asked if the traffic was abnormal (though I knew it wasn't) and they said it was normal for Tana. So they took our money knowing they could not possibly deliver anything close to what was promised.
...Meer lezen

Departure17954930416
Skyscrapers of Dubai Burj Khalifa & Dubai Frame With Return Transfers | aug 2019
Pick up was on time. Transportation was clean and comfortable. The driver was friendly and accommodating. We went in August and there were no lines and there was no wait at the attractions. This not a guided tour, pick up and drop off only, but includes admission tickets. This was nice. I would recommend.
...Meer lezen

NorthStar04759932385
2-Hour Dhow Dinner Cruise along Dubai Creek | jun 2019
I absolutely enjoyed and have a fun. Lovely Indian food. The only thing I did not like was when the cruise was turning some of the tables went on the floor mine was one of them apart from that I had memorable time😀😀😀😀
...Meer lezen

The Frame was 5 stars.... DO NOT BOOK THIS TOUR. The tickets are 50 AED each which breaks down to 13 USD. The experience indicates that they drop you off and pick you up, and provide tickets.... our driver was late went to the wrong hotel, got lost, and when we finally got to the frame handed us a 100 AED note instead of tickets. The driver was so lazy he didnt even get the tickets. THEN when we were leaving, the driver asked us if we can get a cab on the way back. I was laughing because I thought this was a joke. But he was serious. I called the owner who then indicated he would send a driver to pick us up, but we opted to take a cab.... If you go yourself, you will save about 300 AED/100 USD. Do not book this through this company, go on your own

We paid almost $500 for a guided tour and our guide did not speak English. Also, it felt very shady, no tickets were given, we drove the forest tour guide home in our van, etc. Really disappointed, as we book many Viator experiences each year.

Pros:
Lemur park and Geyser are quite some unique experience. Could count as some of the best places we have been in Madagascar. So if we have the choice again we will definitely do it. The local guides in Geyser was very good despite we had quite a language barrier, they tired their best to make sure we were safe and happy. La Terasse was one of the best meal we had.
Cons:
Our driver only speaks very limited English, the local guide only speaks French, so we usually don't known how long we needed to walk or how's the road condition before we get off our car. We were confused about the arrangement at times as well.
La Chute de La Lilly is quite a beautiful waterfall but is not as unique, still worth spotting it as it is close to the hotel anyway. However on the evening when we visited it the weather was not quite fine, it was raining and we could hear thunder approaching even saw lighting from a distance when we almost returned. Which made walking around open rice fields, crossing a river that leads to the waterfall and walking on some slippery muddy road for almost 2 hours looked a bit unsafe. We made it without a scratch but I might not recommend you do it if you see a similar weather condition.
Overall: Would be very much better with English speaking driver, the walk are very safe if weather is fine, but expect the need to walk quite some distances.

Our guide, Serge, was so excellent...

Our guide, Serge, was so excellent! He said his English was not so good but it was. We saw so much local culture - the geysers, the waterfalls and the Lemurs Park. We also chose to eat at some local restaurants instead of the hotels. However, most importantly, Serge wanted us to be happy and satisfied. His motto was I always try to be better. What a beautiful country with hard working people.

No one came to pick me up Dhow dinner Cruise pick up. I was in the same locations as I was for the city tour and Desert Safari. The other two events were fulfilled as booked. There appears to be no number to call and and get this straightened out either.