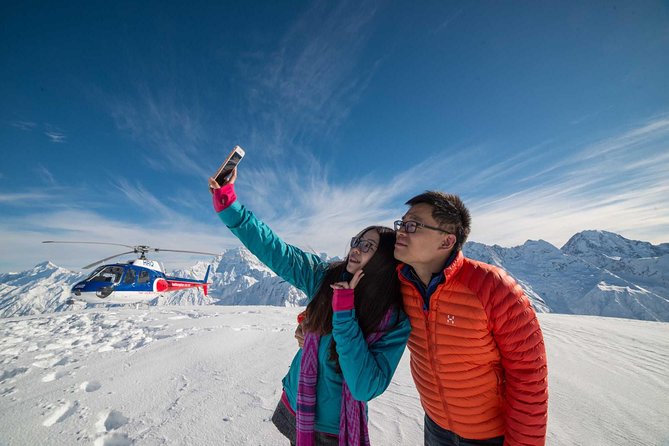 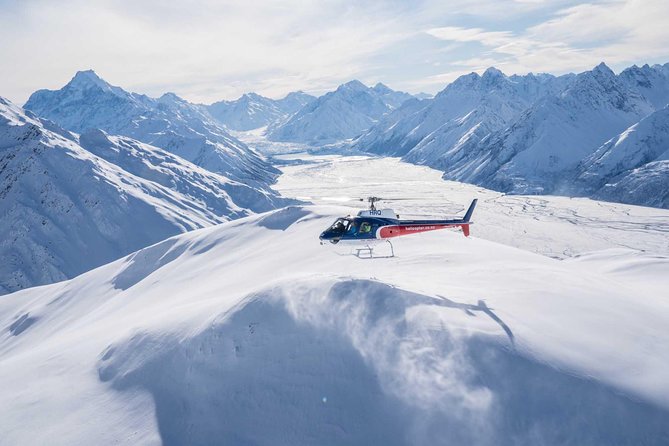 Mt Cook and the Glaciers with glacier landing

Diane_P
Mount Cook and The Glaciers Helicopter Flight | mrt 2020
This was an absolutely amazing experience and the BEST way to see Mt Cook and the glaciers. Our pilot Simon was skilled and knowledgeable. I had never been in a helicopter and felt relaxed and able to enjoy all I was seeing!
...Meer lezen

174heidig
Mount Cook Alpine Vista Helicopter Flight | jan 2020
Staff at Mt Cook centre very helpful. We were early and staff got us an earlier helicopter flight. Mike, pilot, was very friendly. Told us about the area we were flying over and informative. Took photos of us when helicopter had landed. A great experience
...Meer lezen

Raylyn W
Mt Cook Helicopter Flight and Tasman Glacier Walk | nov 2019
This was the most amazing excursion! The pilot and guide were incredible. We hiked on the glacier for a good bit of time and Chris got us up close and personal with beautiful blue crevasses and other cool ice formations! Don't miss this!
...Meer lezen

A must do activity in Mount Cook

Mary M
Mount Cook Mountains High Helicopter Flight | jan 2019
We really enjoyed the helicopter ride.Beautiful view. Our pilot Richard is excellent. He explained the area and history. The staff are very friendly and helpful. This is a highlight of our NZ trip.
...Meer lezen

Go00788620603
Mount Cook Mountains High Helicopter Flight | nov 2018
Be carefull!! The flight was not the same as advertised. Our flight suppposed to fly to Fox and Joseph Glacier as well (advertised on the page of Viator) but the helicopter base officers said no!! First they said the wind upstair was not ok to fly. Later they said our program was not included!! Already emailed for reasons to Viator but nobody replied. Anyone could help with this non-responsibility?However, the experience overthere was good.
...Meer lezen

It was an awesome experience however...

It was an awesome experience however we only had less than 90 minutes on the glacier when it was advertised as a 2 hour glacier hike. A bit disappointing for the cost of the tour. It was not a cheap tour for my husband and myself and we had booked it as a special treat. No offer of a reduction in cost was given. Our guide was very good, but the bottom line is that we would have liked more time on the glacier or at least be offered a reduction in cost for the reduced time. We also did this tour with another friend.

This was an amazing tour. Our...

This was an amazing tour. Our morning tour got cancelled related to weather. Luckily we were able to get booked onto the afternoon tour. The weather cleared and we had an amazing time. It was a small group 10 people who had the entire glacier to ourselves. Our guide was knowledgeable and allowed the group to explore at our own pace. This was probably one of the highlights of our trip to New Zealand!!!

Were delayed a day due to weather...

Were delayed a day due to weather but all worked out fine with our schedule and the staff and pilot and guide were all very accommodating, knowledgeable, and made it a great experience...especially once we got on the glacier. Got some great pics and made some great memories. Thanks to all!

The helicopter ride to the glacier...

The helicopter ride to the glacier was not very long just that it was moving quite slowly. Alternatively, it could have taken it to a higher altitude for better views of Mt. Cook and glaciers. Also, the walk on the glaciers could have been made more interesting by having some planned activities, like use of ice axe by individuals etc.
All in all, the experience was not worth the price tag put against it of 555 NZD.

It was okay. For the money we spent...

It was okay. For the money we spent on this I don't believe they showed all the glaciers they promised. The only think that was shown was the front face of Mount Cook and the glaziers on the same side. When asked if they will show the other side as described, they said wind was not favourable, I don't think we had a lot of wind that day, it is just that they say something on the site, but don't do what they say. Little disappointing, suggest people to ask clearly what they will show just before you give the money.

This helicopter flight was fantastic...

This helicopter flight was fantastic - we thoroughly enjoyed this tour. The staff were very friendly and were able to fit the flight within our schedule, despite the morning fog. I would highly recommend going on this tour while in Mount Cook.

Fantastic. Well worth it. If you...

Fantastic. Well worth it. If you haven't been in a helicopter before that adds to the excitement.