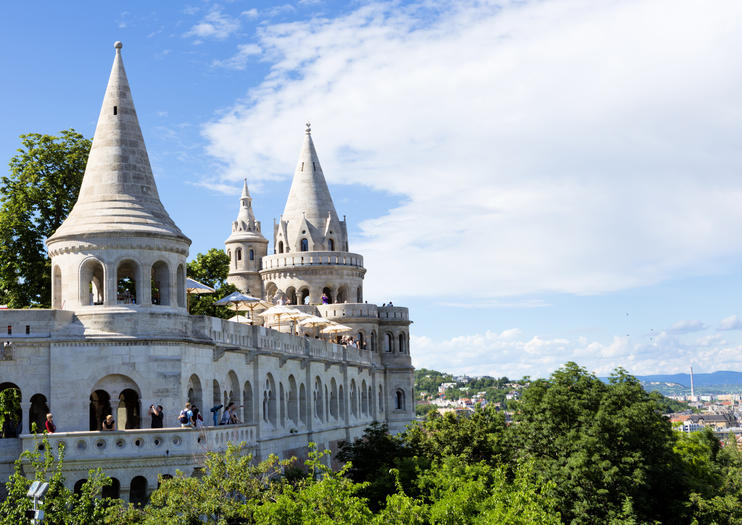 Fisherman’s Bastion, or Halaszbastya, is one of Budapest’s most picturesque lookouts. Nestled high on Castle Hill, the neo-Romanesque terrace was built between 1895 and 1902, in celebration of millennial Hungary. Though today’s structure is decorative, it sits on fortified walls that were used to defend the city throughout its early history.

The Basics
Discover Fisherman's Bastion viewpoint on a city or historical tour, combining it with other hilltop landmarks to maximize your time in Buda. Opt for vehicle transfer to ascend the hill with ease, be immersed in the district on a walking tour, or take advantage of cruise or flight experiences for an alternative perspective. Day trips run regularly from Vienna, Belgrade, and beyond, while multi-day tours often include a visit as part of European sightseeing itinerary.

How to Get There
Accessing the bastion, which is located at the summit of a steep incline on the Buda side of the city, can be tricky. Opt for a tour with round-trip transfer for fatigue-free sightseeing, or ride the metro to Batthyány tér, Széll Kálmán tér, or Budapest-Deli stations, and then climb to the lookout point. Several local and hop-on hop-off bus services also stop nearby.

When to Get There
The Fisherman’s Bastion is a great spot to watch the city’s annual New Year's Eve fireworks show, with free entry throughout the winter season. The romantic lookout is also ideal for anniversaries or Valentine’s Day dates.

Celebrating Hungarian History
Though Fisherman’s Bastion was designed to feel more like a fairytale fortress than a defensive feature, there are several nods to Hungary’s history dotted throughout the design. Each of the seven towers are dedicated to one of the tribes that formed the first medieval settlement, and statues of important Hungarian figures such as John Hunyadi and King Saint Stephen overlook the stairs and walkways.
Adresse: Szentháromság tér 5, Budapest, Central Hungary, Ungarn
Les merVis mindre