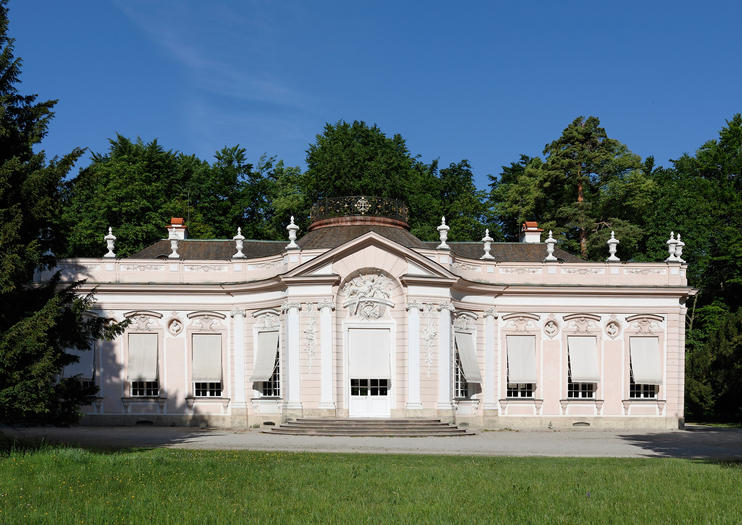 The Amalienburg palace is the former hunting lodge of Emperor Charles VII. Located on the expansive, scenic grounds of Nymphenburg Palace (Schloss Nymphenburg), it is considered a fine example of European Rococo style.
The Basics
Visit the Amalienburg, a masterwork of Belgian-born architect François de Cuvilliés, to experience the flamboyant Rococo style common to the courts of central Europe in the 18th century. A somewhat plain exterior contrasts with its interior, boasting intricate and colorful stucco work, wood carvings, paintings, Dutch tiling, and silverwork. Must-sees include the circular Large Salon, also known as the Hall of Mirrors, and lavishly appointed dog kennels.

Explore the Amalienburg as part of a flexible hop-on hop-off city bus tour that also stops at Marienplatz, Pinakotheken art museums, Hofbrauhaus, National Theater, and the colorful outdoor Viktualienmarkt. Extended tours may include time to visit the rest of Nymphenburg Palace, the former summer residence of the Bavarian elector princes and kings.

When to Get There
The Amalienburg is open daily from April through mid-October. Best to come in spring or fall to avoid the summer tourist crowds and the accompanying higher prices. Visit in late September or early October to celebrate Oktoberfest before the palace closes for the season.

Exploring Nymphenburg Palace and Park
Nymphenburg Palace is fairy-tale baroque and rococo palace that attracts 500,000 visitors each year. The royal summer residence was designed by noted Italian architects Agostino Barelli and Enrico Zuccalli, whose talents and influence were at their peak. Of special note are the grandiose frescoes in the Great Hall, the near scandalous paintings of women whom King Ludwig I fancied (displayed in the aptly named Gallery of Beauties), and the formal French-style park.
Adresse: Schloss Nymphenburg, 203, Munich 80638, Tyskland
Les merVis mindre