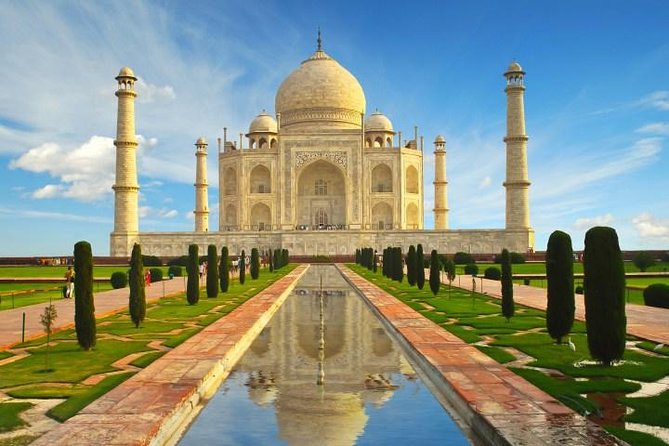 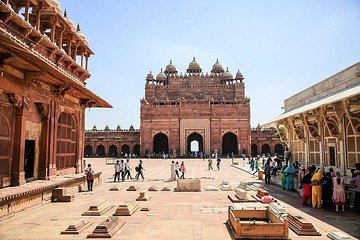 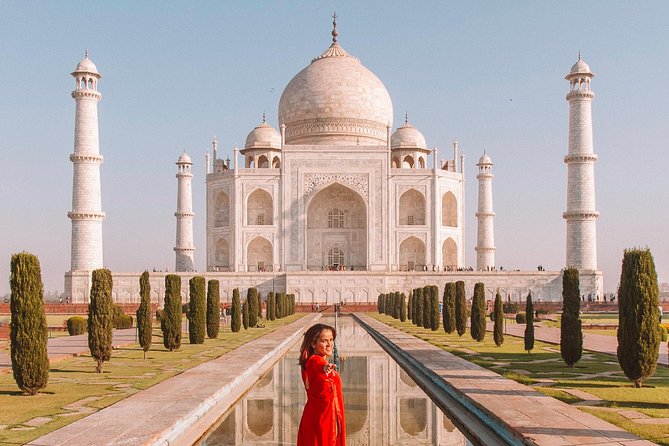 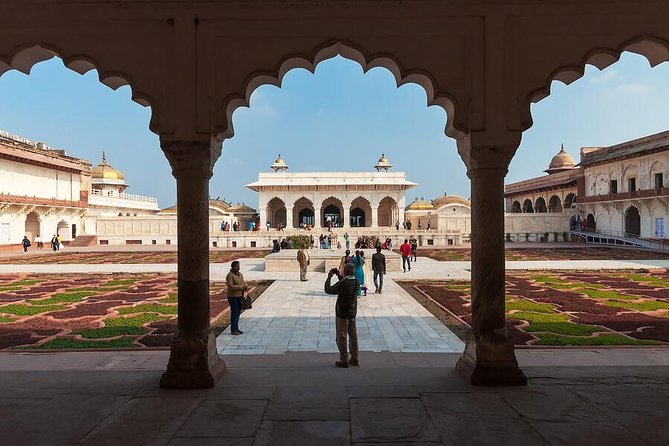 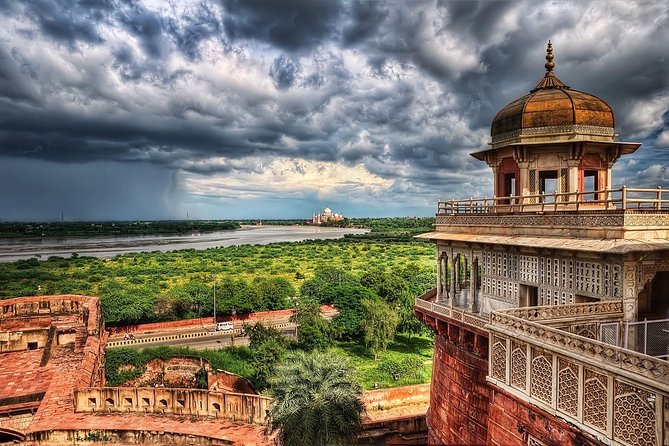 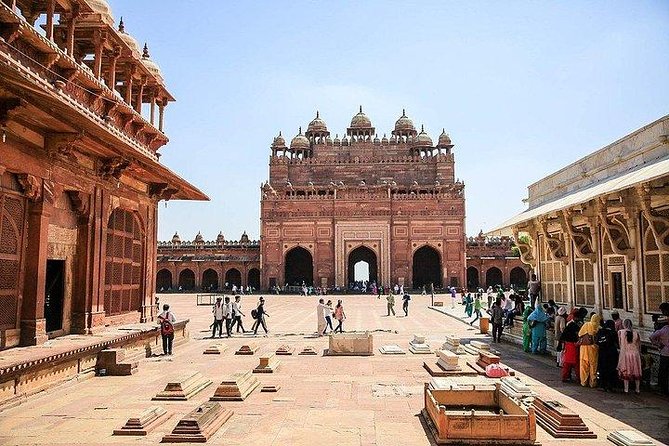 5,0
11 avaliações
5 estrelas
4 estrelas
3 estrelas
2 estrelas
1 estrela
Avaliações dos viajantes da Viator
Absolutely loved this tour, highly...
Daniel S
, mai 2017
Absolutely loved this tour, highly recommend going around. Make sure to take water in, as you won't be able to buy any inside.
... maisMenos
Our guide Seema did a wonderful job...
Julia M
, dez 2016
Our guide Seema did a wonderful job of explaining the history and engaging us with the history and facts of the Taj Mahal and Agra Fort and Fatepur Siri. You really get a wonderful personal experience on this tour! The included lunch provided safe and tasty food. Shopping stops are included.
... maisMenos
Our Agra tour was one of the best...
Jason B
, jan 2016
Our Agra tour was one of the best I've ever been on--and I've travelled a lot and taken many a tour. The sites themselves were breathtaking--the Taj, Agra Fort, etc. But by far, the best part of the tour was Seema. In all my tours, across the globe, Seema was by far the best tour guide. Her knowledge of the sites, history, and local culture, are unmatched. She is an articulate communicator and provided interesting and insightful explanations at every stop. She was engaging throughout. She also provided a very personal perspective on life in Agra that we just couldn't have gotten anywhere else. Seems single handedly made our trip to India one of the best in my life. I cannot thank her enough.
... maisMenos

Brian_C
Private Full-Day Mumbai City Tour with Elephanta Caves Excursion | mar 2020
Wonderful experience seeing the highlights of Mumbai, including the impressive Elephanta Caves. Our guide was very knowledgeable, friendly, and easy-going. We all had a great time and enjoyed seeing as much of Mumbai as we could in the full-day tour. Would highly recommend for anyone visiting Mumbai for the first time!
Leia mais

MichaelAnton_D
2-Days Private Ranthambhore Tiger Tour from Jaipur | mar 2020
We had very big big luck. We saw a tiger and we even saw, how he caught an Antilope only 100m from us. Great experience, but surely not a common situation
Leia mais

Kyle_E
Spiritual Delhi Temples Full-Day Private Guided Tour | mar 2020
An outstanding experience with a knowledgeable and personable guide and an excellent driver. The explanations of the temples and religions were very clear. Timing of the visits was perfect for missing the crowds. I had a delightful day.
Leia mais

Katie_C
2-Days Private Ranthambhore Tiger Tour from Jaipur | mar 2020
Great experience although we didn’t see a tiger. Great communication and everything as stated on the website. Transportation to and from the Jaipur was excellent - good driver. Highly recommend this company.
Leia mais

Greg_D
3-Day Private Golden Triangle Tour: Delhi, Agra and Jaipur | mar 2020
We really enjoyed this trip and it packs a lot in over the 3-days. Our driver was curtious and friendly however be prepared for a crazy driving experience in India. Each day we had a different guide and whilst they had great knowledge of each area, we did find them a little difficult to understand as they speak English so fast. Also be prepared to get a little harassed with sales people when you visit some of the local craftsmen. They do make wonderful stuff but once you are there they feel like you should be buying something.
Leia mais

Exploring the Golden Triangle in Style

Michael_T
5-Day Private Golden Triangle Tour: Delhi, Agra, and Jaipur | fev 2020
The tour was fantastic! We got picked up from our first hotel and never had to worry about a thing. Our driver, Hari, was amazing and all of our guides were knowledgeable and friendly. Having door to door service let us enjoy our time without having to worry about the details of how we were going to get from point A to B.
Leia mais

adamseula
Sunrise Taj Mahal Agra Private City Tour | fev 2020
The Sunrise Taj Mahal, Agra Fort tour was more than we expected. While there was plenty of fog when arrived we still enjoyed and appreciated the spectacular view of the Taj Mahal at 6:30am. It was great that at that time of the morning we didn’t have a huge crowd. We were able to get great photos. I do regret it wasn’t perfectly clear but still there was something special about seeing this great work of art for the first time with the mist. We stayed a couple of hours and as our tour guide told us the fog did burn off. Of course as it burned off the crowd grew larger. The Taj Mahal is even more spectacular as the sun hits the building. The combination Ot the white marble and the many stones in laid in the marble mark for a beautiful sparkling effect. Next we visited Agra Fort. A very large and beautiful fort . Learned a lot about the history of India. Well worth seeing. Finally, we chose not to visit the last site (an hour drive there and back and at least and tour would have meant a full 12 hour day. Instead our Guide took us to a mausoleum sometimes called “Little Taj”). little Taj was very interesting and we enjoyed seeing it. All in all a great day with a great guide and driver.
Leia mais

rebeccaxtan
3-Day Private Golden Triangle Tour: Delhi, Agra and Jaipur | fev 2020
Excellent guides that brought us to see things we would not have known about - also at the right time to beat the crowds! Very informative and we got great pictures too.
Leia mais

ccazuogu
3-Day Private Golden Triangle Tour: Delhi, Agra and Jaipur | jan 2020
This tour is a must if you have limited time. Our tour guides (Dilip [Delhi], AD [Agra], and Vijay [Jaipur]) are the best to ever do it--their knowledge base is unparalleled; they are organized, detail oriented and well established in their various locales. You will get to visit many workshops and boutiques of local artisans in each town. Mr. KK Sharma, our driver for the 3 days, is phenomenal. He knows the roads so well and had the car ready at every spot. We never stopped for gas or wasted any travel time. Truly amazing. Beware, if you have car sickness, there is a lot of driving involved. This did not bother me but my friend found the road from Jaipur back to Delhi a bit difficult.
Leia mais

CatherineD3121
3-Day Private Golden Triangle Tour: Delhi, Agra and Jaipur | jan 2020
We were very well taken care of from start to finish. The local guides were all very friendly, and knowledgeable. Our driver, Hari, was also very friendly. I found his driving to be very safe (particularly by Delhi standards!). The hotels on the 5* option were wonderful. Our only 'complaint' was that we were not able to see the Taj Mahal at sunrise due to the haze, but this was communicated to us prior and was out of the tour guides' control! We were given the option as to whether to be taken to shops or not, which we appreciated. It is not compulsory.
Leia mais

Elizabeth B
3-Day Private Golden Triangle Tour: Delhi, Agra and Jaipur | dez 2019
This is a MUST tour! The tour guides were so knowledgeable and very personable. The driver was great as well. We learned so much and saw all the must sees in each city. Singh from Delhi, Mahesh from Agra, and Ashok from Jaipur were just amazing and most delightful! They were open to our many questions ranging from history, religion, and cultural practices. Our eyes were opened to the beauty of India and its people. We loved every minute of this tour!
Leia mais

Experience741864
Private 5-Day Ranthambhore Tiger Tour from Delhi including the Taj Mahal, Agra and Jaipur | dez 2019
I was very impressed by the professionalism and knowledge of our guides. Customer service was outstanding. We traveled as 3 friends and they even gave us 2 rooms. It was an eye-opening trip. Thanks to our guides I was mesmerized by India. Our guide Seeme Singhal just made Taj Mahal more unforgettable. India should be proud of their citizens like our guides. Thank so much!
Leia mais

Highlights of India in Three Days

DarcyC_12
3-Day Private Golden Triangle Tour: Delhi, Agra and Jaipur | dez 2019
We booked the Three Day Golden Triangle Tour with Viator, and as usual, Viator delivered an excellent experience. As we only had a few days, we wanted to see as many of the highlights of India as we could, without being rushed, and on this tour we did just that. We started out in Delhi, where our driver and tour guide arrived punctually at the hotel to pick us up. Sites such as Qutb Minar, Himayuns Tomb, the Lotus Temple, and India Gate are not to be missed. After that we drove approximately three hours to the hotel in Agra. We had the evening free to enjoy the hotel and relax before an early morning start on day two. The Taj Mahal- well, it’s the Taj Mahal!! Breathtaking, a must see item that should be on everyone’s list. Our guide recommended we go early to beat the crowds, good call, as it was starting to fill up as we left the site. We also seen Agra Fort on day Two as well. Another great site! After Agra Fort, we were on the road again, this time for Jaipur. It was a long drive, 4 hours, but the car was comfortable, the AC worked, there was snacks and water, and there was even WIFI in the car, an unexpected bonus! The next morning, we seen the Amber Fort, perched up on its mountain plateau. It was an excellent couple of hours there. Then we went and seen the Water Palace, explored the Observatory- very cool- the Royal Palace, seen the Wind Palace, and watched some craftsmen as they made rugs and clothes by hand. After that it was about a four hour drive back to Delhi. Overall, nothing but great things to say about the tour guides (as we had a different one in each city), the driver, and the tours themselves. We selected 5-star hotels and they were up to standard. The buffet breakfasts were delicious! A special shout out to our tour guide on the second day, Seema Singhal, who took us through the Taj Mahal and Agra Fort. She was very enthusiastic, friendly, and full of pertinent and interesting facts and stories about what we were seeing, stories beyond what the tour books offered. If you’re looking to see as much as you comfortably can see of India and its culture in a short period of time, then this three day private tour is for you.
Leia mais

dominiqueroos
Private Full-Day Mumbai City Tour with Elephanta Caves Excursion | nov 2019
Naina guided us through the wonderful sights and sounds of Mumbai, and the Elephanta caves, giving us an excellent overview with lots of interesting detail. really happy with Naina who was very well informed and knew the answer to any question we asked. spoke English really well. highly recommended.
Leia mais