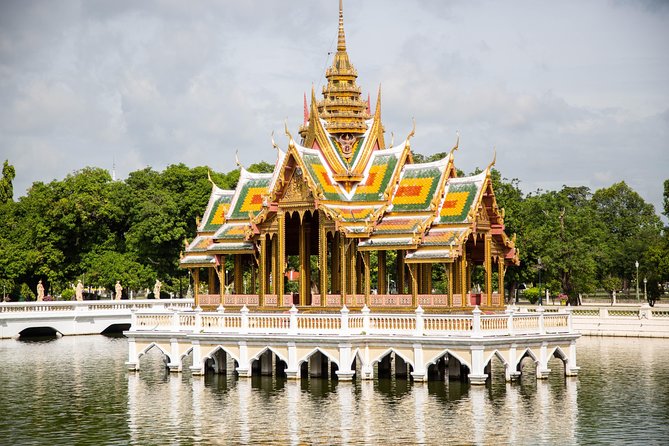 Bangkok is home to over 26,000 Buddhist wats, or temples. Expect to be humbled by their gorgeous gold foil stupas, enormous Buddha statues, fragrant incense, intricate stonework, and serene ambience. Here are some of the must-see Buddhist temples in and around Bangkok.

Set near the Grand Palace complex and just inland from the Chao Phraya River, Wat Pho is included in most city tours for good reason: It’s centrally located; is one of Bangkok’s oldest temple sites; and houses one of the city’s largest Buddha statues, a 150-foot (46-meter) reclining golden Buddha. The statue has ornate patterns on its feet and an apparent smirk on its lips, perhaps at photographers’ futile attempts to capture its largess. The temple grounds are also home to an array of point-topped chedi, Thai Buddhist stupa-like monuments, and a cloister lined with golden Buddha statues—no two of which are the same.

Another gold Buddha worth a visit and often included in temple tours is the 15-foot (4.5-meter) seated one in Wat Traimit, on the outskirts of Chinatown. Not your average gold Buddha, this one is made of solid gold, weighs about five and a half tons, and is worth millions. The palatial white and gold temple also houses exhibits on the history of the Chinese community in Bangkok, an interpretive center, and a museum that documents the story of the golden Buddha statue.

Tuk-tuk temple tours typically stop at Wat Phra Kaew. Considered one of the most sacred temple sites in all of Thailand, its storied dark-green statue, just 26 inches (66 centimeters) tall, is believed to have been carved in the 14th century. Its murky history is filled with legend, and the temple’s elaborate carvings of kinnara (Buddhist mythological figures) and warrior statues supporting golden chedi add to the site’s mythical flair. A newer temple a few miles away and often coupled with tours of downtown wats is Wat Benchamabophit, a late 19th-century temple built of Italian marble.

Wat Arun (Temple of the Dawn)

For some exercise, head to riverside Wat Arun, the Temple of the Dawn. Its series of external stone steps are climbable for spectacular city views from its perch on the west bank of the river.

The Ayutthaya temple complex, 53 miles (85 kilometers) north of Bangkok, is the UNESCO World Heritage–listed site of a once-thriving Kingdom of Siam capital. Explore the area’s many intact temples including Wat Phra Si Sanphet, Wat Mongkhon Bophit, Wat Phanan Choeng, and Wat Yai Chai Mongkhon, the latter known for its large bronze Reclining Buddha statue. Tours to the historic area often also include a stop at the former summer palace of King Rama IV (now a museum) and a boat ride to see other ancient temples along the Chao Phraya River.