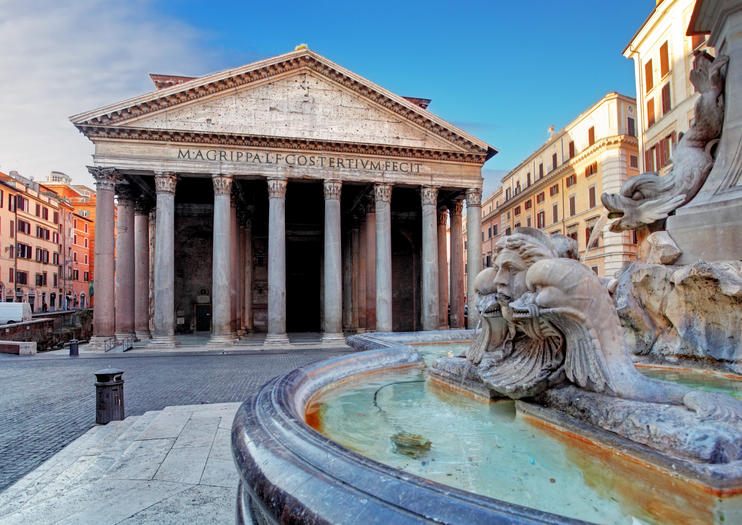 The Pantheon in Rome is a remarkable building architecturally. Basically a cylinder with the floating dome on top of columns, it is the largest masonry vault ever built. In the center of this dome is a hole bringing in a shaft of light to show the beauty of this building and its relatively simple, open interior. Being inside the Pantheon feels very special.

Originally built in 27 BC and rebuilt by Emperor Hadrian in 120 AD, the temple has been damaged and plundered over time. In 609 AD it became a Christian church dedicated to the Madonna. In the 17th century some of its bronze ceiling was taken and melted down for use in St Peter's Basilica. Important figures such as King Victor Emmanuel II and the artist Raphael are buried in the Pantheon.

Underbar turné
Barbara E
, sep 2019
Rom är verkligen trångt - och vi skulle definitivt ha hoppat över dessa sevärdheter när vi såg folkmassorna, men att ha en fantastisk reseguide med verkligt intressant information höll oss fångna. Vi har grundligt haft turnén.
… MerMindre
Disappointing tour
kaylin8
, nov 2019
The guide had poor English. It was hard to understand him. He had a bad attitude. He made a joke, mocked a girl in our group. He did give a good explanation about the building of the Pantheon.
… MerMindre
Well worth it.
HappyCdnTravellers
, nov 2019
Excellent tour guide and very informative. Small group (5 people) was well worth it. We got to see everything we wanted despite the crowds. Gelato treat and rest stop was a nice surprise. Much appreciated.
… MerMindre