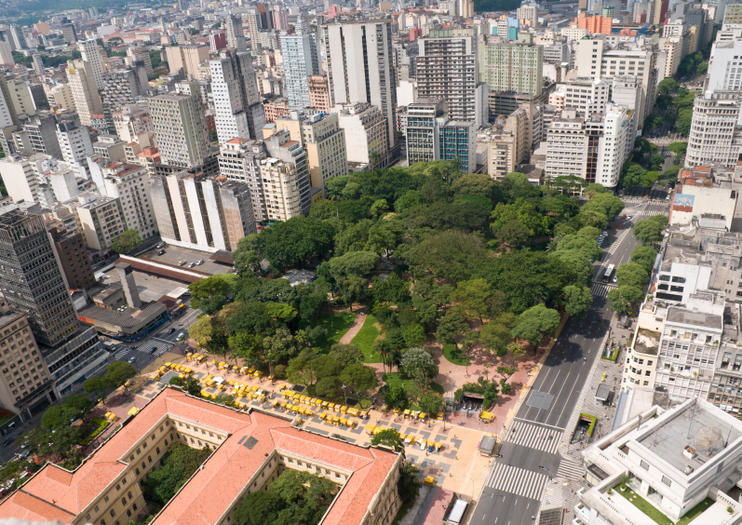 A rectangular eye at the center of the urban hurricane that is São Paulo, Praça da República might have seen better days, but the plaza still holds on to its importance as a focal point for cultural life in the city. Built in 1889 to commemorate a new era in the city’s expansion and development, Praça da República served as the primary location for concerts, political protests, and other large gatherings. Perched within the otherwise tree-shaded plaza is the former Caetano de Campos School, now site of the São Paulo State Department of Education, a handsome structure of yellow brick that—at over 120 years old—contrasts greatly with the mid-20th century glass and steel towers fronting the park. Just across AvenidaIpiranga from the plaza is one of the city’s oldest Modernist residential buildings, the Edifício Esther, inaugurated in 1938, and overlooking the park from the southwest corner is the nearly 500-foot-tall EdifícioItália, São Paulo’s second-tallest building.

On weekends, the plaza hosts a large crafts fair and flea market, with over 600 vendors selling everything from colorful landscape paintings from Brazil’s northeast to woodcarvings and other household knickknacks. Despite 24-hour police presence, the area can get sketchy after dark, when hustlers and the homeless make their way into the park.
Adress: Praça da República, Sao Paolo, Brasilien
Läs merVisa mindre

We will leave the hotel towards the Pacaembu region where we will stop to see the great football stadium and its surroundings. Then we will visit the famous Avenida Paulista, a symbol of modernism in São Paulo. We will see MASP, where we can admire its modern aesthetics. We will pass through the Trianon Park, and visit the Casa das Rosas. After leaving Paulista we will take a panoramic tour of Ibirapuera Park. Known as the Central Park of São Paulo, this park was designed by great landscapers and has historic buildings and monuments. Before ending the tour, we will pass through the Bairro da Liberdade, famous for the influence of Japanese immigration in the city. Hold onto the Praça da Sé, where the Cathedral and the College Courtyard are located. We will cross the city center passing by the Church and Monastery of São Bento, Viaduto do Chá, Municipal Theater, Vale do Anhangabaú, and Praça da República. Our last stop is at Estação da Luz and overlooks Parque da Luz and Pinacoteca.
...  Fler
Från
55,00 US$
Från
55,00 US$
Läs mer

Get to understand the amazing historic process of São Paulo that in 465 years of existence (early times a village), marked by relative inexpressiveness for more than three centuries, has become the largest city in the Southern hemisphere and one of the largest cities in the World. This is a themed tour taken in a restored “Classic Car” such as the “Packard 1938”, "Chevrolet 1939" or the "Oldsmobile 1935". Explore some of the most historically city sites such as “Pátio do Colégio”, “Sé Cathedral, “Largo São Francisco Law School”, “Tea Viaduct”, “Luz Train Station”, “Republic Square”, “Higienópolis Neighborhood”, Paulista Avenue, to finish it up at a coffee shop on the Top Deck of one of the most spectacular viewpoints of a building on Paulista Avenue. Learn about the monumental importance of different groups like the Portuguese, Native Indians, Afro-Brazilians, Italians, Japanese, Arabs, Jews, Germans, and others, in the formation of São Paulo as well as the legacy left by them.
...  Fler
Från
360,00 US$
per grupp
Från
360,00 US$
per grupp
Läs mer