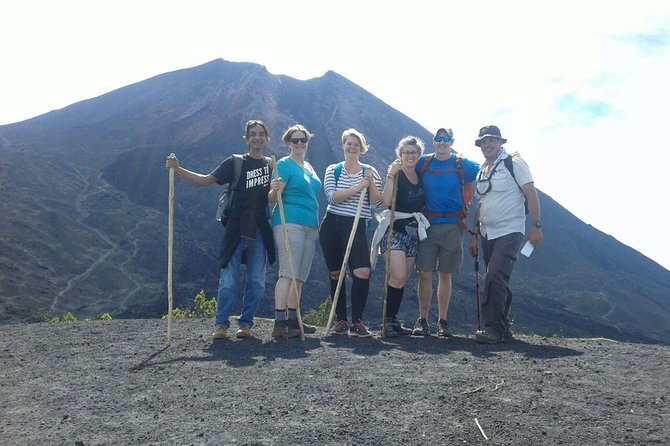 Get up close and personal with a Guatemalan volcano during this 7-hour Pacaya Volcano hike, one of the country’s most active. Travel through volcanic vegetation and surreal landscapes on your way to the top, enjoying impressive views of three nearby volcanic peaks, including Agua, Fuego and Acatenango at the summit. Your trip from Antigua to the volcano also includes round-trip transportation from your hotel and a guide.

We pick up from any hotel in Antigua Guatemala.

Experience views of some of Guatemala’s most active volcanoes from up close as you hike to the top of Pacaya, where you’ll enjoy unforgettable views from the top of this 8,000-foot (2,438m) peak.

Start your day with an 8am pickup from your Antigua hotel, taking a 15 mile (25km) drive southeast to the base of this lumbering giant. Upon reaching the base, you’ll begin a 2.5-hour climb to the peak with your guide, learning about the history of this unique volcano and the vegetation that thrives in this strange environment. A mild walk brings you the lagoon of Calderas, where you can take in the amazing views of three nearby volcanoes, including Agua, Fuego and Acatenango.

Then continue on towards a plateau in the trail, a vantage point from which you’ll be able to observe the main crater along with stunning views of the surrounding countryside. Due to safety concerns, you won’t venture all the way to the volcano’s crater, but you will have the chance to see glistening lava and a series of steam baths created by its heat.

Take a few moments to revel in the incredible views from up high before beginning your descent back down to the base and then back to Antigua for a drop-off at your hotel.

Enjoy a full-day trip to the Pacaya Volcano from Antigua Guatemala and discover the beauty of this natural gem! Towering over 8,000 feet (2,438 meters) above sea level, Pacaya is considered Guatemala's most active volcano. After pickup from your Antigua Guatemala hotel, head southeast about 15 miles (25 km) to the base of Pacaya, where you’ll embark on a 2.5-hour hike up the volcano with your expert guide. Enjoy a mild walk to a viewing spot at the lagoon of Calderas and take in panoramic views of the Agua, Fuego and Acatenango volcanoes. Once you arrive at a plateau along the trail, marvel at spectacular views of the Guatemala landscape and see the main crater of the volcano. To ensure your safety, you won’t be able to visit the crater, but you will get an amazing view of red-hot lava flowing and steam baths created by the heat of Pacaya. Take a break and relax here as you take in more scenic views before hiking back to the base of the volcano.

Q:What is the policy on face masks and attendee health during Pacaya Volcano Day Trip from Antigua?

Q:What is the policy on sanitization during Pacaya Volcano Day Trip from Antigua?

Q:What is the social distancing policy during Pacaya Volcano Day Trip from Antigua?