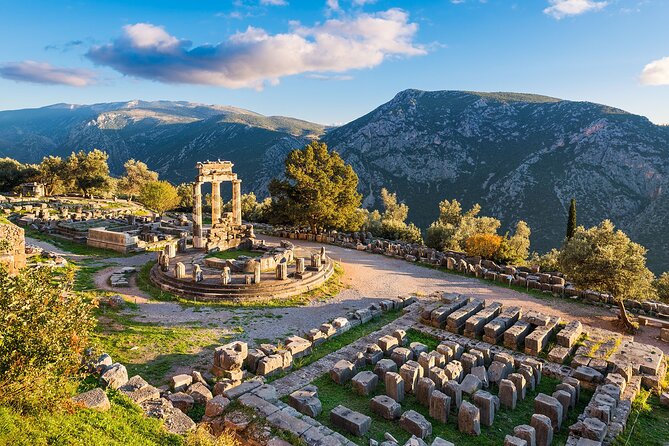 Get a comprehensive overview of classical Greece on this 7-day tour from Athens. Meals, activities, transportation, and accommodation included per itinerary.

We can offer a pick up at any point wihtin the city limit of Athens with a luxurious vehicle.

Arrive at the Athens International Airport, where your guide will meet you and provide direct transfer to your 4-star hotel in Athens. Enjoy a free afternoon and evening in the city, where you can dine and stroll the scenic, twilit streets.

Meet your guide in the morning and set out on a panoramic, half-day tour of Athens, with transit between stops via comfortable bus. First discover the modern center of the city and its key landmarks, including Syntagma Square, the Tomb of the Unknown Solider, Greek Parliament, and the sights along Eleftherios Venizelos Avenue.

Next, discover the Arch of Hadrian, the Temple of Olympian Zeus, and the Panathenaic Stadium (where the first modern Olympic Games were held in 1896). Then it’s on to the crowning glory of the tour: the Acropolis, where you can admire landmarks from the golden era of Ancient Greece, including the Propylaea, the Temple of Athena Nike, and the Parthenon.

Return to your hotel in the afternoon and evening, with free time to dine and explore as you wish.

Enjoy a free day in Athens. Immerse yourself in vibrant, modern Greek life, wander through narrow streets, and be sure to sample traditional Greek cuisine, washed down with ouzo. An optional 1-day cruise of three Greek islands can also be scheduled on this day. Stay overnight at your hotel.

In the morning, depart from Athens, traveling along the coast for a short stop at the Corinth Canal before continuing to Epidaurus, where you’ll admire the ancient theater, consider the best-preserved in all of Greece. Next, you’ll head to the coastal port town of Nafplio for a short stop before continuing on to Mycenae and its many architectural treasures. After a tour of Mycenae’s sights, including the Citadel and Tomb of Agamemnon, depart for Olympia. Arrive for dinner and an overnight stay at a 4-star hotel.

In the morning, commence your tour of Olympia, the birthplace of the ancient Olympic Games. Explore its Archaeological Museum and extensive ruins before departing for Delphi, passing through scenic Greek countryside as you go. Located on Mount Parnassus, Delphi was famous in the ancient world for the Temple of Apollo, which housed the Oracle of Delphi. Arrive for dinner and an overnight stay at a 4-star hotel.

Spend a day exploring Delphi’s archaeological complex, which includes ruins of the Temple of Apollo and Temple of Athena Pronaia, and the Delphi Archaeological Museum. In the afternoon, depart for Athens. Arrive for dinner and an overnight stay at a 4-star hotel.

Receive transfer from your hotel to Athens International Airport.
Day 1

Arrival at Athens airport - Transfer to your hotel.

Arrival at Athens airport - Transfer to your hotel. We propose a walk to enjoy the nightlife of Athens. Overnight in Athens.

Athens City Tour with Acropolis Visit the archaeological site of the Acropolis (Parthenon) to admire the masterpieces of the Golden Age, the Propylaea, the Temple of Athena Nike, the Parthenon and the Erechtheion. Panoramic tour of the city - you will discover the center of the city, the Constitution Square (Syntagma), the Tomb of the Unknown Soldier, the Parliament and the neo-classical buildings of Panepistimiou Avenue (Academy, University and National Library). You will also see the Gate of Hadrian, the Temple of the god Zeus Olympian and the Panathenaic stadium by making a brief stop for a photo. Free time for lunch in a local tavern Then you will visit the new Acropolis Museum where you will admire the impressive sculptures that decorated the temple of Athena Nike, the Erechtheion (with its Caryatids) and the Parthenon. Overnight in Athens

Enjoy your day by strolling to the plate and narrow streets, which are full of traditional restaurants where you can taste typical dishes of Greek cuisine, the famous drink "ouzo" and enjoy the atmosphere of this vibrant neighborhood.

Leave by the coastal road to the Corinth Canal(shortstop).

The Great Theatre of Epidaurus

Drive on and visit the Theatre of Epidauros, famous for its remarkable acoustics.

Proceed to the town of Nauplion (short photo stop)

Drive on to Mycenae and visit the Archaeological Site and the Tomb of Agamemnon.

Departure for Delphi, crossing the plains of Ilia and Achaia and reaching the large bridge of Rio, which connects the Peloponnese with mainland Greece (Antirio) through Lepanto and other picturesque towns. Arrive for dinner and overnight.

Departure for Athens. Overnight in Athens.

You can cancel up to 7 days in advance of the experience for a full refund.