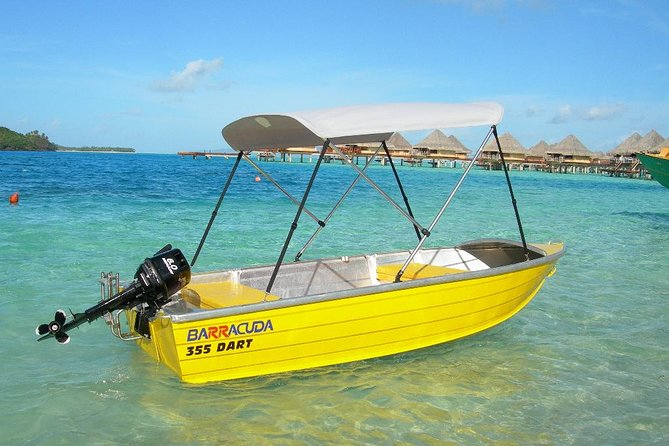 Control your own adventure when you rent and drive your own boat in Bora Bora. Choose from a half or full-day rental and explore the idyllic coastline as you wish. Stop to snorkel at a coral garden, anchor at beautiful beaches, and relax in the shade as you admire the views from your boat. You’ll be given a detailed map and helpful itinerary suggestions.

You can head directly to the meeting point, or request pickup

The boats for rent are located in Matira, on the beach of the HOTEL MAITAI. Upon request, we'll be pleased to offer free roundtrip car transfer from the main island. If staying in a Resort located on a motu (except Four Seasons & St Regis), you'll just need to take the shuttle boat of the hotel and we’ll meet you upon arrival at the pier.

Q:What is the policy on face masks and attendee health during Self-drive Bora Bora Boat Rental?

Q:What is the policy on sanitization during Self-drive Bora Bora Boat Rental?