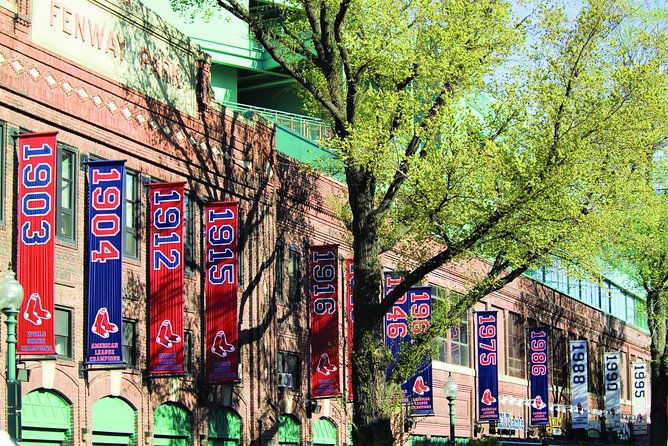 Revel in the history of Fenway Park, one of baseball’s most beloved stadiums, during this guided tour. Revisit the careers of Red Sox greats like Ted Williams, Babe Ruth, and Carl Yastrzemski, celebrate the club’s numerous World Series titles, and tour famous stadium locales like the ‘Green Monster,’ ‘Pesky’s Pole,’ and the Fenway Park Living Museum.

Select your preferred tour starting hour at the time of booking and then meet your guide at Fenway Park. Over the course of the tour, get an insider’s look at this historic stadium and the most renowned moments from more than 100 years of baseball history.

Explore the extensive collection of Red Sox memorabilia and history in the Fenway Park Living Museum, including more than 170,000 stadium artifacts, 150,000 photographs, and a variety of historical displays. For a more detailed listing of Fenway Park’s extensive collection of exhibits, artifacts, and memorabilia, check out the itinerary details below.

Select your preferred tour starting hour at the time of booking and then meet your guide at Fenway Park. Over the next 60-minutes you’ll get an insider’s look at this historic stadium and the most renowned moments from more than 100 years of baseball history. Check out the roof deck which looks out over Fenway’s right field, and view stadium highlights like the 37-foot (11-meter) tall “Green Monster” and “Pesky’s Pole.” Your guide will also help you relive the best moments from Red Sox history, including the team’s World Series wins in 1903, 1912, 1915, 1916, 1918, 2004, 2007 and 2013, as well as the careers of team legends like Williams, “Yaz”, Fisk, Rice, and Tiant. You’ll also have a chance to explore the extensive collection of Red Sox memorabilia and history in the Fenway Park Living Museum, including more than 170,000 stadium artifacts, 150,000 photographs, and a variety of historical displays. For a more detailed listing of Fenway Park’s extensive collection of exhibits, artifacts, and memorabilia, check out the itinerary details below. Itinerary The Fenway Park collection currently includes: • 170,000+ artifacts related to the history of Fenway Park and the Boston Red Sox • 24,000+ 3-D artifacts and 150,000+ photographs • Memorabilia from Red Sox greats such as Ted Williams, Babe Ruth and Carl Yastrzemski • 90 World Series team signed baseballs and 36 game-used baseball bats • Artifacts from the historic 2004, 2007 and 2013 World Series • 17 different displays, including eight located in Fenway Park concourses and eight in the Nation's Archives at the Royal Rooter's Club Other displays include: • Fenway's early years • Fenway in the 1930s • Moments to remember: 1940s-1980s • Moments to remember: 1990s-2008 • 2013 World Series display • World Series baseball display • Historic Fenway Park lockers: Ted Williams and Johnny Pesky • 2004, 2007 and 2013 World Series baseball bat display.

This experience is non-refundable and cannot be changed for any reason. If you cancel or ask for an amendment, the amount you paid will not be refunded.

Q:What is the policy on sanitization during Tour of Historic Fenway Park, America's Most Beloved Ballpark?

Q:What is the social distancing policy during Tour of Historic Fenway Park, America's Most Beloved Ballpark?

Q:What measures are being taken to ensure staff health & safety during Tour of Historic Fenway Park, America's Most Beloved Ballpark?

I recommend checking withe the tour operator about which days are less busy.
A smaller group would have been better sometimes it was hard to keep up and take photos because the group had already moved on.
I just wanted to take in my camelback filled with water but was not allowed.
Reviews
4.5
1,086 reviews
Total review count and overall rating based on Viator and Tripadvisor reviews
0
0
0
0
0
Reviews by Viator travelers.
Showing 1-10 of 1,086 reviews
Sitting in the press box,...
Ronald_W, Aug 2022
Sitting in the press box, seeing World Series trophies, sitting on Green Monster. Tour guide was great
Great Tour with great history
Stephanie_P, Aug 2022
The tour was really great and gave. A lot of history. It was so awesome to hear all the stories from when it first opened. We loved going into the press box and green monster!
Kroll family at Fenway
william_k, Aug 2022
Being at the Green Monster. Then all the other parts of the stadium were great. Two things that were so great were sing in the old seats from the late forties to early fifties in that they were so small I had to sit sideways as my legs were to long. Also too bad there was going to be a concert so the field was being set up with a stage and also many other tents and pieces of equipment for the event such it did not look like a baseball field.
Great day at Fenway Park....
Patty_S, Aug 2022
Great day at Fenway Park. Loved learning about all of the ballpark history. Guides were terrific! Definitely recommend if in Boston.
Okay but not satisfied.
David_M, Aug 2022
The tour was good but there were over 100, yes 100 people in the tour. This made it difficult to hear the guide. Also was disappointed that we didn’t go behind the Green Monster.
1 traveler found this review helpful
Great tour!
JoAnna_A, Aug 2022
Our tour guide was amazing! He was a wealth of information and made sure we saw everything. The stadium is very nice.
Fenway Parking Terrible
Joshua_O, Aug 2022
There was absolutely no parking. Parking usually for patrons attending games was reserved for permit holders only. Allowing for 1 hour time to find parking still was not enough. Local gas stations providing overflow parking were full as well. In short, missed tour as parking was not available. Would have taken Uber or Lyft if we would have known that the usually available stadium parking was not available as on non-game days the spots reserve to by permit only.
Great tour
Daniel_B, Aug 2022
Great tour.Toutt guide was great. Really enjoyed the experience.. make sure and have water and a hat because it can be a little hot.
Great Guide
Amy_W, Aug 2022
We had the best tour guide - Jeremiah Poope. He knew so much and made the tour really funny and interesting. Highly recommend him!!!
Great Experience. And we are Detroit Tiger Fans..
Ben_L, Aug 2022
Overall tour. Going on the Green Monster. Sitting in the wooden seats Hearing the history of how Fenway came to be. Be able to go in the Press box
The tour was fantastic. I...
Joseph_J, Jul 2022
The tour was fantastic. I loved the end where they showed us the Hall of Fame bats and the retired jerseys for the former greats.
Fenway Park
Michelle_L, Jul 2022
It was good. I really don’t want fill this in this form or say anymore, but you won’t stop sending me emails!
A thrill to experience this ballpark!
Clay_C, Jul 2022
We really enjoyed different stories our tour guide had such as learning about Pesky’s pole or Ted Williams homerun that hit a fan on the head while sleeping. Getting to see the view from the Monster seats and looking through the memorabilia room we’re also highlights. Every fan of baseball should take any opportunity they have to tour the ballpark. Loved learning that Babe Ruth played on this field!
A Must See in Boston!
Shae_L, Jul 2022
Wow...all of it. The secret garden, the old score board, the stadium food smells, and the authentic preservation.
Great venue and experience for smaller sized groups
Annette_S, Jul 2022
The venue was awesome! Our tour guide was very knowledgable. However, our group was large and we missed some of the information he was sharing because of it. If the group size had been more managable for him, this would have been an exceptional experience!
Wonderful experience,...
Laura_S, Jul 2022
Wonderful experience, enjoyed learning the history of this iconic place, highly recommend this tour. The tour guides were great!
Ok tour
Wesley_J, Jul 2022
Less than expected. Press box tour? Dug outs? Walk about the field? Stories and guide were very entertaining but wish we’d seen more of the park.
Nostalgic
Danielle_S, Jul 2022
Our tour guide was awesome and truly passionate about her Sox! She made the tour fun with little stories along the way.
Tour guides make the tour
Heather_W, Jul 2022
I was very disappointed at the tour guide. I think they broke out tour in two and he was told to wait with us so he asked us stand up comic questions, “ So where are you from?” Etc. And then he would actually ask us a question and never gave us the correct answer. He teased us with visits to certain sites but time ran out and we were escorted to the musuem and then the exit. If you want to take a tour of Fenway. Go see a game and walk around while reading the Wikipedia page off “Fenway Park”. Don’t waste money on the tour itself!!
Summer living 2022
Bonnie_W, Jul 2022
Just an awesome historical place… Jackie Robinson!!!!!! Our tour guide needs a huge shoutout!!!! Sarah. Kindergarten teacher. New bucket list item. Watching a game from the green wall
...