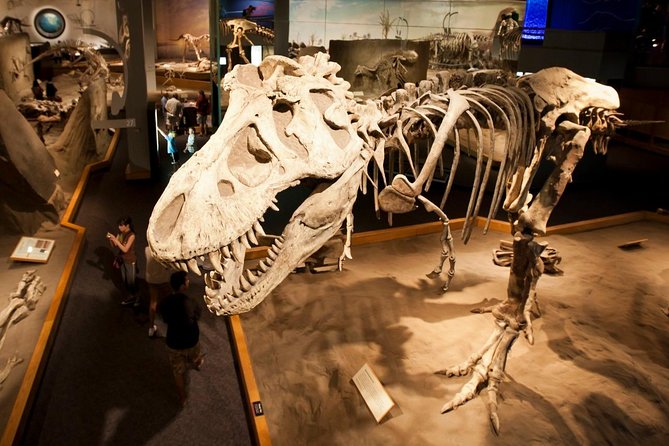 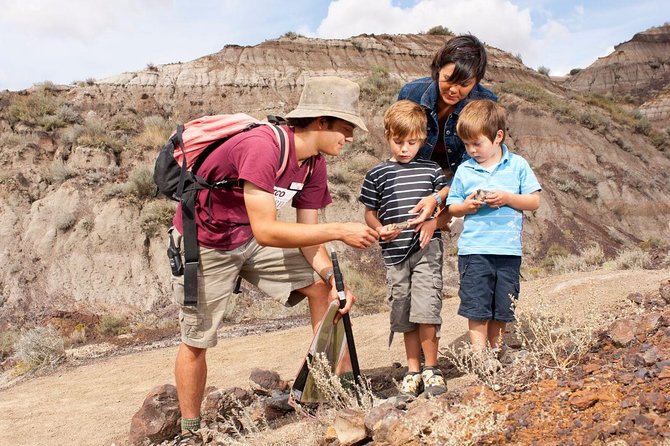 Explore the wide-open Badlands of Alberta on this 8-hour coach day trip with guide from Calgary, stopping for sublime views, a dinosaur fossils museum. Experience the moon-like landscape of Drumheller, frequently called the Dinosaur Capital of the World, where you’ll see the intricate layers of Horseshoe Canyon. You’ll also visit the dinosaur exhibits at the world-class Royal Tyrell Museum, learning from scientists about the fossil discovery and collection process before taking a guided bone-hunting walk. Your trip includes museum admission and coach transport.

Experience the surreal landscapes of Alberta’s Badlands during this 8-hour day trip by coach from Calgary, learning about the area’s wealth of dinosaur fossils and amazing rock formations along the way. It’s a great way to get a sense for the powerful natural forces and amazing creatures that have shaped this rugged terrain over millions of years.

Start your trip in the morning from the Calgary Tower, driving east into the gold-tinged prairies of Alberta on your way to Drumheller, a region of intricately-layered rocks and strange hoodoo (thin rock spire) columns. Over the course of millions of years, these spindly rock towers were shaped by the wind and water, growing to heights between 16 and 23 feet (5 and 7m). Hear from your guide where these strange rocks got their name, and hear stories about how the indigenous peoples of the area considered them to be petrified giants that would come to life at night to attack intruders.

Head next to Horseshoe Canyon, among the most popular attractions in Drumheller, discovering its geology, native plants and animals and history at the canyon’s Interpretative Centre. Continue your day in the town of Drumheller, known as the Dinosaur Capital of the World due to the incredible wealth of fossils found nearby.

More than 130,000 specimens that were found in the area (many of them dinosaurs) from more than 300 species can be found at the town’s Royal Tyrell Museum. Check out the museum’s incredible range of exhibits and watch as scientists work to assemble the skeleton of a raptor. At the museum you’ll also learn about the process of finding, collecting and preserving fossils unearthed from nearby Dinosaur Provincial Park, a UNESCO World Heritage site.

Hoping to find some fossils during your trip? Take the museum’s Dinosite tour (own expense, when available), a guided 2-mile (3km) walk through the Badlands’ hilly terrain, passing fossils still in the ground and hearing about the landscape of ancient Alberta.

Take a break to have lunch (at your own expense) at the museum before leaving town for the Atlas Coal Mine, where you’ll have a chance to explore one of Canada’s most intact historic coal mines. Learn about the arduous, sometimes fatal, work of the miners and view the mine’s wooden coal tipple, the last remaining such device in all of Canada.