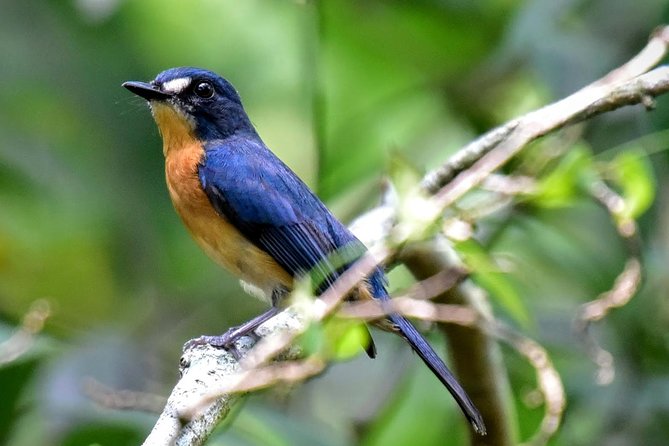 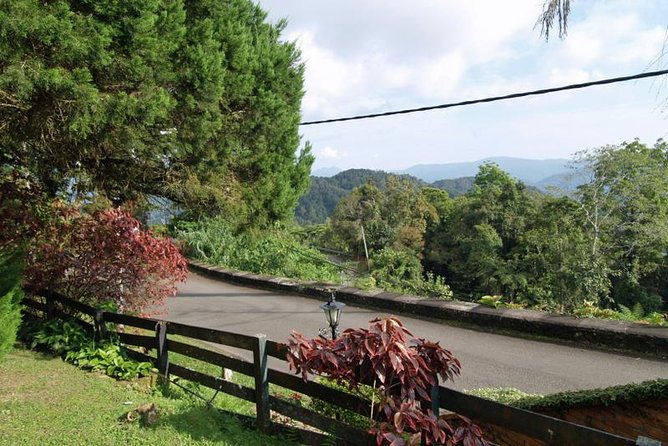 Visit one of Malaysia’s bird watching hotspots on this private morning tour from Kuala Lumpur. Admire the natural wonders of Fraser's Hill; enjoy views of Sungai Selangor dam and Allan’s Water; and spot birds like Flycatchers, Minivets, and Sibias. Hotel pickup and drop-off is included.

Meet your private guide at your hotel in central Kuala Lumpur and hop aboard your private air-conditioned minivan. Depending on the tour option chosen, either make an early start at 5am in order to enjoy the best bird watching opportunities, or set out at 8am to take in the beauty spots around Fraser’s Hill.

Soak up the scenery on the around 2-hour drive to Fraser’s Hill, stopping along the way to admire the region’s natural wonders and take photos. Arrive at the Sungai Selangor dam and learn about the significance of the dam from your guide as you gaze out over the vast manmade lake, a popular fishing spot.

Then, set out on a short trek through the jungle, stopping to explore a striking colonial-era settlement and take photos of Allan’s Water, a pretty boating lake.

Finally, if you’ve selected the bird-watching activity, follow your guide on a 2-hour nature trail, taking in some of the 31-mile (50 km) network of walking trails. Keep your camera and binoculars close to hand as you seek out rare and unique birds, including up to 270 different species. Listen as your guide identifies each bird, and perhaps spot Dollarbirds, Laughing thrush, Green Magpie, or Red-bearded Bee-eater.

Anne_B
Private Langkawi Tour with SkyBridge, Langkawi Cable Car | Mar 2020
Great experience for anyone visiting Langkawi, even though I dont particulary like heights, the view itself is worth the trip. If you are like me, just look straight ahead, views are spectacular. Be prepared, it is very hot, and humid, take water up with you and dress in something cool, and walking shoes as well.
...Read more

Amazing views of the whole city

Kelly_L
Skip the Line: Petronas Twin Tower Entry Ticket Including Hotel Delivery | Mar 2020
Very interesting, wouldn’t do KL without the towers. Very professional and worth the trip. Amazing views from the top and skybridge.
...Read more

MandB
Private Langkawi Tour with SkyBridge, Langkawi Cable Car | Mar 2020
What a fabulous day, from the moment we were picked up by our private driver, yo the unexpected stops to waterfalls on the way, even arranged for the glass bottom canle car!! It was a brilliant day made all the better by Dean our driver, viukd not recommend it highly enough@@
...Read more

Not worth the money

BEW
Half-Day Private Kuala Lumpur City Tour | Feb 2020
We did a 4 hour private tour with a guide. It was OK. We didn’t visit everything that was stated on the itinerary. I thought it was expensive for what it was
...Read more

banelsontrip
Private Langkawi Arrival transfer to Hotel | Jan 2020
Abu was waiting for us at the airport and a quick ride to our hotel. We arranged for him to take us out the next day around the island and the itinerary he put together was amazing. We saw it all and he did not rush us at all. Booked him to take us to our cruise ship and then after we returned back to the airport. An amazing driver
...Read more

doublemar12
Private Half-Day Langkawi Island Hopping by Boat | Jan 2020
Pick up was 50 minutes late! No information about delay. When I rang, was told not beeing only tourist
...Read more

hana365mw
Private Day Tour of Langkawi with Cable Car and Telaga Tujuh Waterfalls | Dec 2019
Tour was good but as we were a big group including elderly and babies we didnt have enough time we had to cancel 3 activities so that we could make it to cable cars. The tour guide is not very specific about everything we wasted alot of time as well as he advised us to go on quad bikes to c the falls which we had to pay extra think the guide should have an idea of each place and how many minutes he will give us on each activity
...Read more

Carolnomad
Private Half-Day Hawker Trails Food Tour in George Town | Dec 2019
Our tour guide Lam was incredibly friendly and knowledgeable. Took us to where the locals would eat for the famous dishes and indeed the food we sampled were delicious and we wouldn’t have found these places if we searched on our own. He was also telling us stories of local areas and sights while he drove us. Highly recommended!
...Read more

llk95
Private Langkawi Tour with SkyBridge, Langkawi Cable Car | Nov 2019
We never received a confirmation from the tour operator or Viator about the exact pick up point, luckily one of the locals was so friendly to call them. Our driver was Mohammed, his English wasn’t very good. He drove us to a beach, where we got an introduction about a boat tour to the mangroves, when I looked at the map I saw that we were all the way north of the island which is not in the direction of the cable car. He tried to sell us an extra boat ride of 2 hours that we did not want at all. When we started driving again, he was talking about a waterfall and we stopped again at a kind of travel agency desk. I went to Mohammed and I explained to him that we booked a tour of 4 hours to go to the Cable Car. He explained us that it’s going to be cloudy overthere now in the morning and that’s better to go in the afternoon.. he only wanted to sell other tours to us! After we had this conflict with him, he almost didn’t say anything anymore in the car of he gave barely any narration. When we (finally) arrived at the Cable Car we first had to line up to change our Travel Agent voucher for actual tickets and then line up for the Cable Car. We checked with Mohammed when we hadto be back and he just said take your time. When we came back to the car, he asked us if we wanted to go for lunch. I said to him that we only wanted to do the itinerary that we paid for and included a stop at Eagle Square. At that moment the drama started as he said that we would go over the 4 hours duration of the tour that was scheduled? Well, the droves us to the other side of the island to try to sell us more! At the end, after phone calls with his boss etc, he droves us over to Eagle Square and back to the cruise port where we arrived 1,5 hour later. Would not recommend this tour! The views from the Cable Car where stunning. The ticket for the little train between the top cable car station and the start of the skybridge are not included, and involves a lot of stairs so I would book that at the kiosk like we did.
...Read more

neemika
Private Full Day Kinabalu National Park Tour with Canopy Walk Including Lunch | Nov 2019
Canopy walk was closed and guide wasnt aware either. Great disappointment because i heard the canopy walk is the highlight. But otherwise the other oprtions of the tour was fine.
...Read more

A day in Sepilok

Lisa D
Langkawi Crocodile Farm and Underwater world Visit with Private Transfers | Oct 2019
We were excited to get up close and personal with these magnificent creatures. What we saw was disappointing. A lack lustre show, poor environments, building construction sites meaning areas were closed off. Sad crocodiles with less room than a baby in a crib. Do yourself a favour and skip this one, we felt awful that we had contributed to this place. Also- be careful of the transfer drivers. Our driver encouraged us to go to a waterfall and a mangrove farm first - we were all for it until we asked repeatedly about extra charges and were told it would cost us a heap extra, and on top of that would have extended our tour by 4 hours which meant we would have had to pay the driver a heap as well. Just be wary of any friendly offers :)
...Read more

Great excursion if you love elephants

fudgeyk1ns
Private Tour: Kuala Gandah Elephant Sanctuary and Batu Caves Tour from Kuala Lumpur with Lunch | Sep 2019
Great day out, not cheap but very convenient having a driver with you all day. Elephant sanctuary was lovely, seeing them bath was fun and the Batu caves were beautiful.
...Read more
|
Reserve Now & Pay Later
We'll reserve your spot today, and you can cancel up to two days before your experience without making a payment. Secure your spot with ease, stay flexible, and never miss out.
How it works
Find your experience
Choose the experience you want knowing you can secure your spot without being locked in.
Make a reservation
Reserve now and pay later to secure your spot, commitment-free.
Choose when to pay
Come back to pay once your plans are set, or let auto-pay kick in two days before your experience.
Enjoy your experience
Now you're all set! Have a great time.
Frequently Asked Questions  | Terms & Conditions
Reserve Now & Pay Later
Secure your must-do activities without being locked in
Learn More