Stonehenge, Windsor Castle and Bath with Pub Lunch in Lacock 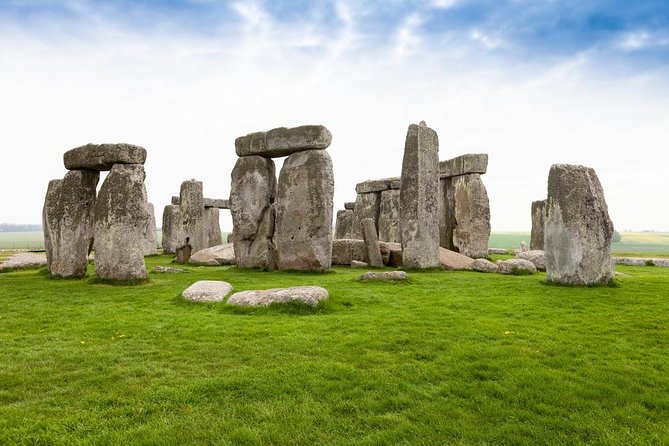 Avoid the hassle of renting a car to see rural England’s highlights with help from this full-day tour which includes round-trip transport from London. Choose from two options to find what best suits your preferences, and travel by air-conditioned coach bus with onboard Wi-Fi. You can either combine a visit to Stonehenge with a pub lunch in Lacock and a walking tour of Windsor, or opt to visit both Windsor Castle and Stonehenge with a break for a traditional English pub lunch. Both options also pass by the city of Bath, hometown of Jane Austen.

In addition to the multiple sightseeing stops, this tour includes lunch in a traditional, 14th-century pub.

After pickup from the central London meeting point, travel by air-conditioned coach to your first stop, Windsor. Here, you’ll either visit Windsor Castle or go on a walking tour of the city, depending on your tour option chosen.

Afterward, continue by coach bus to Stonehenge. Admire England’s countryside as you travel to Salisbury Plain, the home of this UNESCO-listed stone circle, whose origins stretch back 4,500 years. Marvel at the prehistoric edifice, now generally thought to have been a temple aligned to the movements of the sun. Gaze at the stones, ponder how they were transported here and explore the cutting-edge visitor center to see the archaeological and virtual displays.

Next, continue to the picture-postcard village of Lacock, one of England’s prettiest spots. The 13th-century village has starred in period TV drama adaptations such as Jane Austen's Pride and Prejudice, as well as movies such as Harry Potter and the Philosopher's Stone.

Head inside The George Inn, a welcoming, 14th-century pub, and savor a delicious, traditional English lunch. On rare occasions, when the inn is shut, you will visit a similar, nearby pub for your meal.

Duly refreshed, venture onward to the handsome Georgian city of Bath, once home to Jane Austen, the beloved,18th-century novelist. Enjoy a panoramic coach tour of the honey-stoned architecture, admiring top Bath attractions such as the sublime Royal Crescent and Pulteney Bridge on route.

Then, take a short guided stroll past the famous Roman Baths and impressive Bath Abbey. Delve into the cobblestone streets, browse for souvenirs and take snapshots of the lovely 18th-century buildings.

Your tour then concludes with drop-off in central London.

Please note: The order of the visit may change and lunch may be replaced by supper.

Stop by Bath Abbey, a place of worship at this site for over 1,200 years

Q:What is the policy on sanitization during Stonehenge, Windsor Castle and Bath with Pub Lunch in Lacock ?