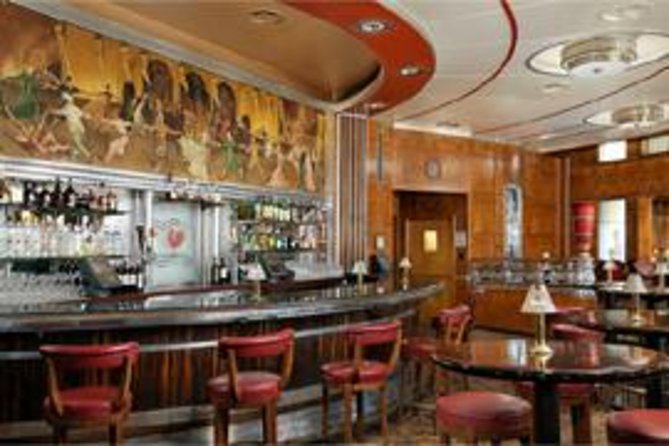 See Similar Products
Yay! This item has been added to your cart. 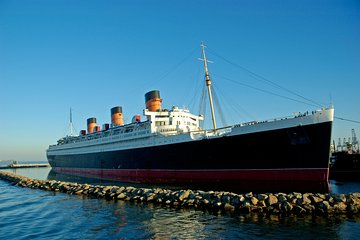 Check out a different era of cruising during your port excursion as you explore the historic transatlantic oceanliner ‘Queen Mary’ in Long Beach. Explore this glamorous ship’s one-of-a-kind art deco design, learn about its role in WWII, and imagine yourself living the luxurious life of a first-class passenger. A range of ticket options allow you to discover this amazing vintage cruise ship at your leisure and gain access to special exhibits.
Saved to wishlist!

Hours: 10am to 6pm
Please note: Hours of operation subject to change without notice

Relive one of the 20th century’s most elegant periods of cruise ship travel as you explore the transatlantic oceanliner ‘Queen Mary’ on your port excursion in Long Beach. This iconic 1930s oceanliner is packed with fascinating passenger stories, unique secrets and beautiful interior design.

Start your visit to this historic oceanliner any time during its normal hours of operation, heading to the vessel’s current home in Long Beach, California. You’ll find it via a 20-minute walk from the Long Beach cruise terminal or via a 15-minute drive from the San Pedro cruise port.

During your visit choose from among a variety of different admission options and tours. Each option will help you gain a sense of the ship’s unique history and its many tales of supposed haunted areas and famous celebrity passengers. Take a self-guided tour that allows you to wander the ship’s various compartments from front to back and top to bottom, or choose to visit the variety of exhibits and special performances. Explore a Cold War-era Russian submarine, revisit the life of England’s Princess Diana, join a ghost tour or learn about the ship’s essential service during World War II, helping the Allies to victory. For a full rundown of ticket options, along with the exhibits and activities they cover, please review the itinerary section below.

Please note: This excursion is not covered by Viator's worry-free shore excursion policy, so please allow ample time to ensure your timely return to the port.

Ticket options (for more information about each activity, see below):

Audio Tour
Explore the ship at your leisure and let your audio guide take you through the story of the Queen Mary. Included with General Admission ticket option. (Approximately 1.5 to 2 hours)

Behind the Scenes Tour
This guided walking tour offers you a deeper look into the ship's history, from her construction and launch to her passenger service and days as a troopship. (Approximately 1 hour)

World War II Tour
Learn the story of the “Grey Ghost,” the Queen Mary’s alias during World War II, and how her involvement in the war helped lead the Allied forces to victory. (Approximately 45 minutes)

Haunted Encounters Tour
Take a guided ghost tour of the Queen Mary’s most haunted areas as your tour guide reveals the stories of the ship's most famous reported apparitions. (Approximately 1 hour)

Scorpion Submarine
Explore an authentic Cold War-era Russian submarine, code name "Scorpion," and find out about the life of a submariner. (Approximately 30 minutes)

Queen Mary Historic Exhibit
Discover the Queen Mary's past with this interactive exhibit, where you can step back in time to learn about her sailing years and her war service.

Diana, Legacy of a Princess
The exhibit is a priceless collection of evening gowns, personal accessories, and cherished memorabilia associated with Princess Diana and the Royal Family
Itinerary
Stop At:
The Queen Mary
... MoreLess
Admission Ticket Free

The answers provided below are based on answers previously given by the tour provider to customers’ questions.
Q:
What is the maximum group size during Long Beach Shore Excursion: The Queen Mary?
A:
This activity will have a maximum of 9 travelers.

3.5
3 Reviews
5 stars
0
4 stars
2
3 stars
0
2 stars
1
1 star
0
Reviews by Viator travelers
Showing 1-2 of 3 reviews
The Queen Mary was wonderful. I was...
Kathy
, Oct 2015
The Queen Mary was wonderful. I was very happy to see her in all her elegance even at her age. we were docked right beside the Queen Mary at the long beach terminal. it was a perfect tour!
... MoreLess
HelpfulHelpful
The tour guide for the haunted...
Laura N
, Jun 2015
The tour guide for the haunted encounters was great. Scorpion submarine was interesting. Queen Mary was okay.
... MoreLess
HelpfulHelpful
Reserve Now & Pay Later
We'll reserve your spot today, and you can cancel up to two days* before your experience without making a payment. Secure your spot with ease, stay flexible, and never miss out.
How it works
Find your experience
Choose the experience you want knowing you can secure your spot without being locked in.
Make a reservation
Reserve now and pay later to secure your spot, commitment-free.
Choose when to pay
Come back to pay once your plans are set, or let auto-pay kick in two days* before your experience.
Enjoy your experience
Now you're all set! Have a great time.
Frequently Asked Questions  | Terms & Conditions
*Up to 9 days depending on the booking/product
Reserve Now & Pay Later
Secure your must-do activities without being locked in
Learn More