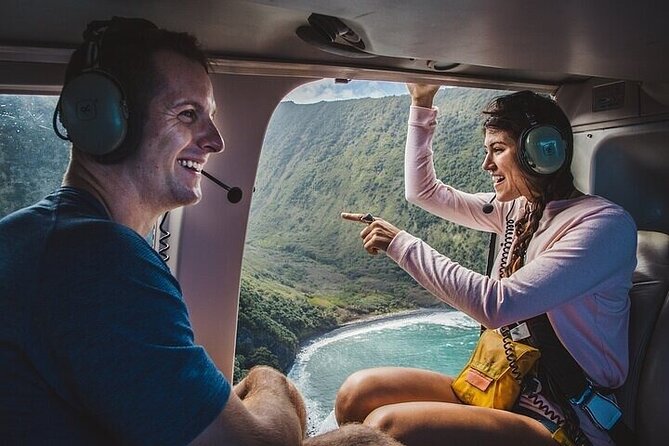 Two of the best ways to explore the Big Island of Hawaii are by air and your own two feet—both of which are possible with this Big Island helicopter tour and hiking adventure. Begin by exploring the island by air on a scenic flight, where you’ll experience the fury of Kilauea Volcano in Volcanoes National Park, and pass over pasture lands, black-sand beaches, and waterfalls that spill toward the coast. You’ll next touch down in North Kohala, the home of King Kamehameha, to hike through valleys and lush rainforests that were once inhabited by kings.

This operator has two meet-up options available. You can either meet at the departure point below or select a location for pick-up.

Your Big Island helicopter tour begins at the Kona airport, where you’ll board a Bell 407 helicopter before lifting off towards the sky. Within seconds from take-off, you’re surrounded by fields of rough, jagged black lava, and also have views of sandy beaches that are hidden along the coast.

While flying towards Volcanoes National Park, you’ll pass right over the 'coffee belt' on the slopes of Hualalai volcano, where much of the famous Kona Coffee is grown on the cool mountain air. You’ll also get views of Mauna Kea and Mauna Loa, which are often snowcapped in winter, before dropping down towards Kilauea volcano and searching for lava and steam. Since much of Kilauea is inaccessible by foot, you’ll visit isolated areas of the park that are only visible by air, and potentially see lava spurting from the ground or spilling out into the sea.

With Kilauea in the rearview mirror, continue on towards the Hamakua Coast and verdant, emerald green valleys, where waterfalls tumble their way towards the sea and waves detonate on shore. Next, the helicopter will land in North Kohala, and you’ll embark on a hike over private land with a Hawaii forest and trail guide. Over the course of this hike, you’ll hear the stories of ancient Hawaii and the kings who have lived in these valleys, including the famous King Kamehameha who was born here in 1758.

You’ll stop at a waterfall for a refreshing dip, and continue walking to the artistic outpost and rural town of Hawi, which was once a hub of the sugar industry but is now known for its galleries. Spend a few minutes browsing through town and poking your head into shops, before hiking back to your awaiting helicopter for the short flight back to Kona.

During this Big Island helicopter and hiking tour, you can expect to walk about two miles (three km) at a slow, leisurely pace, and will also receive rain gear, a walking stick, towel, and small daypack for hiking. You’ll also enjoy a deli-style lunch of ham, turkey or tuna, as well as fruit, vegetables, dessert and a small assortment of beverages.

Q:What is the policy on sanitization during Doors-Off Oʻahu Circle Island Experience from Kapolei?