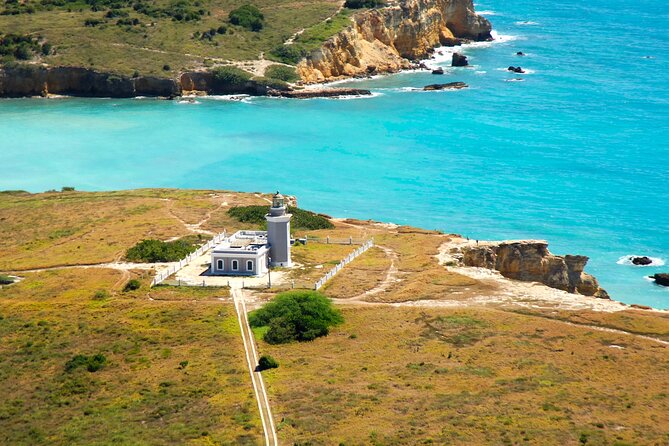 Head off the beaten track and experience Puerto Rico’s undiscovered treasures and natural beauty in a relaxed small group setting. Start the day with brunch in Old San Juan overlooking the historic San Felipe del Morro Castle, before travelling to the breathtaking Crash Boat Beach. Here you can enjoy the landscape while lounging in the shade or partaking in activities such as snorkelling, paddle board, kayaking and a banana boat ride. Next, head to Puerto Rico's southernmost tip to see the Cabo Rojo Lighthouse, a significant historical site dating back to 1882. The final part of our journey will end in a magical boat trip to the La Parguera bioluminescent bay, where you can admire its stunning luminous waters.
Operated by:
Caribbean Breeze Adventures
1,323 Reviews
5 Experiences
On Viator Since October 2019

Enjoy breakfast on us at the acclaimed Don Ruiz in Old San Juan.

Lunch will be at leisure (not included in the price) at the Kioskos at Crash Boat Beach!

Enjoy dinner on us in La Parguera prior to our Bioluminescent Bay boat ride!

You can head directly to the meeting point, or request pickup

**Pick Ups will begin at 7:15 am in the San Juan area and vary by location. If you are staying at the Hyatt Grand Reserve or Wyndham Grand in Rio Grande please prepare for a 6:30 am pick up** After the trip is confirmed, please send a text with your: PRIMARY NAME ON THE RESERVATION PICK UP LOCATION BEST PHONE NUMBER FOR THE DRIVER TO REACH ON THE DAY OF THE TOUR