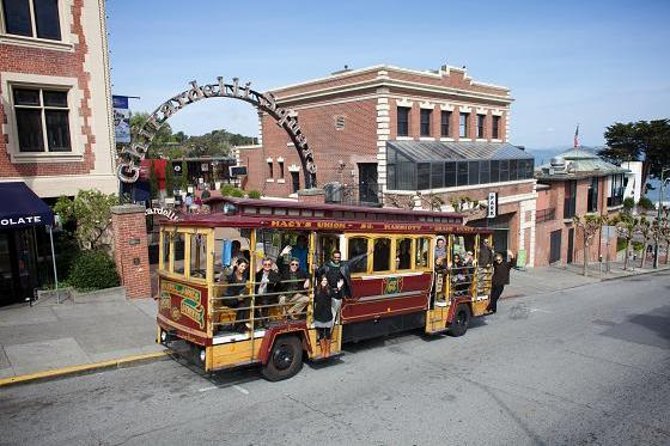 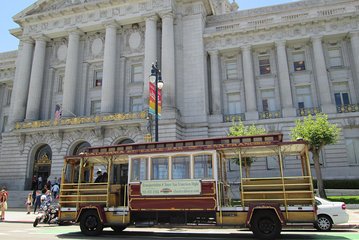 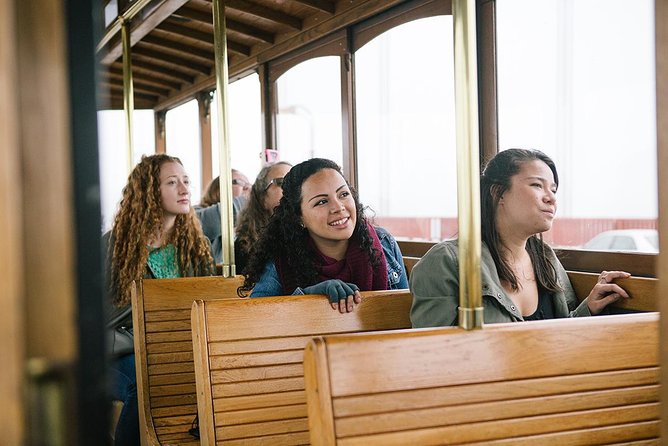 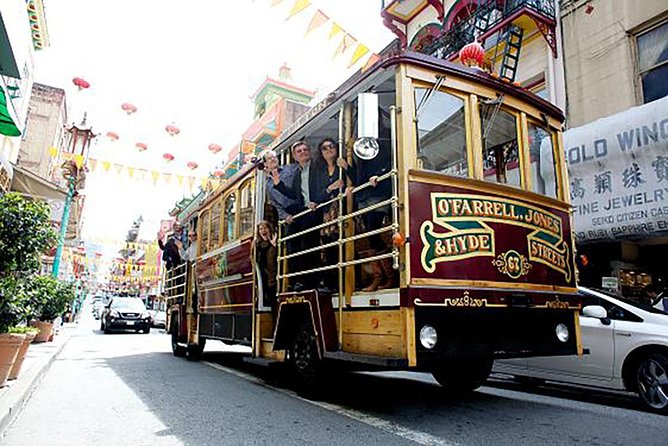 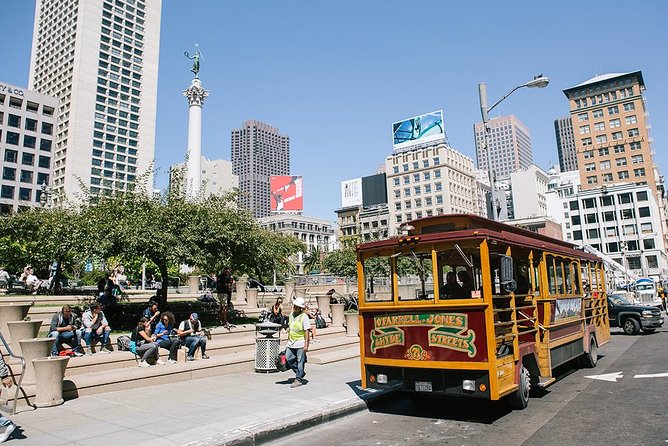 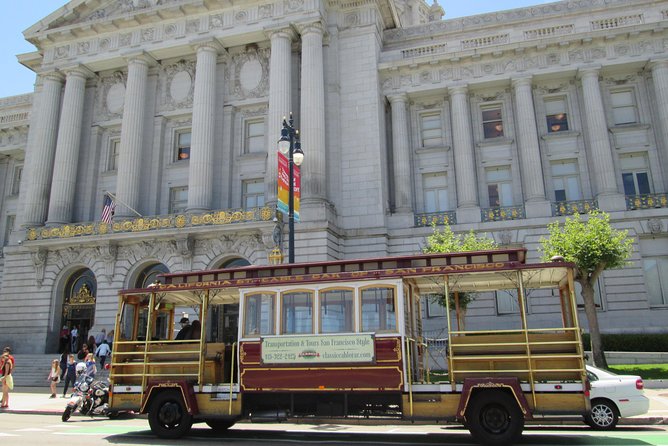 Explore San Francisco on this city tour that provides the chance to ride on a classic-style cable car without having to stick to the limited route of the city's tracks. As you travel aboard the cable car retrofitted with wheels, hop off at three locations to take guided walking tours of the Civic Center, Alamo Square, and Golden Gate Bridge areas. Blankets (it gets cold in the City by the Bay) are included. Select a morning or afternoon departure time when booking.

Sightseeing tour by motorized cable car
Disembark at 3 key locations for guided walking tours
Separate driver and guide so you will always have your guide’s full attention.
Blankets to keep you warm on your journey
Gratuities
Hotel pickup and drop-off
Read MoreShow Less

Your sightseeing tour starts at Fisherman's Wharf, where you board your motorized cable car and set off toward North Beach, the neighborhood also known as Little Italy. Listen to commentary from your guide about the city and its attractions as you travel through Chinatown, and Union Square.

Make your first stop at the Civic Center area where you follow your guide on a walking tour to admire the Beaux-Arts architecture of City Hall, a symbol of the American Renaissance of the 1880s to 1910s.

Back onboard the cable car, continue to Alamo Square, your second stop, for a walking tour around this local park known for the Painted Ladies, also known as the 'Full House' houses. Cruise through Golden Gate Park, the high-end Sea Cliff neighborhood, and along the city's Pacific coastline, finally arriving at the Golden Gate Bridge, where you hop off to walk onto the iconic red bridge and hear from your guide about its history and design.

5.0
275 Reviews
5 stars
4 stars
3 stars
2 stars
1 star
Reviews by Viator travelers
Cable car fun!
laurienit
, Feb 2020
Very fun tour! We really saw all of San Francisco. Val the tour guide was knowledgeable and engaging. Our driver , Roger, was friendly, knowledgeable and a gave us a smooth and comfortable ride.
... MoreLess
The painted lady houses and the Golden gate bridge and more
cjwermie
, Jan 2020
The tour was awesome. Riding on the converted cable car was great. Our guide Robin and driver Sheila were great and made the tour very enjoyable. We saw the highlights of the city and enjoyed all the info that our guides provided.
... MoreLess
Day out
tracymanley35
, Jan 2020
Very informative, interesting and enjoyable. Was very cold so wrap up warm even with the blankets they give you. Curt was our guide and John our driver top marks for both. Thank you for a great trip
... MoreLess
EXCELLENT,
samuelp0nce
, Dec 2019
driver and guide were really nice people. i loved the tour. nothing to complain about. everything was ready when needed
... MoreLess
Trolly ride with Curt and John
Lisa C
, Nov 2019
Very informative! Curt knows the city! Great driving by John. Nice stops and picture taking opportunities! We had a great time and would strongly recommend that someone take this tour to get a great look at the city.
... MoreLess
San Francisco City Tour
lilkim527
, Nov 2019
Great City tour. Very informative and educational. The driver John and tour guide Frank were wonderful. Very funny, entertaining and knowledgeable. I will definitely attend this tour again. The tour included many neighborhoods and local spots that only residents would know about and it’s also included the Golden Gate Bridge. Well worth the money and a great use of your time if visiting the Bay Area.
... MoreLess
Enthusiastic tour guide and wonderful destinations
henryhhuang90
, Nov 2019
Great tour, took us to all the major landmarks. Could very well be a quintessential thing to do in SF
... MoreLess
Great introduction to San Francisco
Kelley E
, Oct 2019
We are so glad we took this tour! It was fun riding on the cable car to see all the main sights of the city and hear history, stories, and interesting facts. Very informative with stops at city hall, the painted ladies Victorian homes, and golden gate bridge for short walking tours and photo stops. Curt and Roger were great! Highly recommend for a nice intro to the city.
... MoreLess
Fun tour
steinerla
, Oct 2019
Great overview of the city and surrounding area. The guide Vicki and driver Roger were exceptional. I would certainly recommend this tour.
... MoreLess
Nice way to see the city
mojo10346
, Oct 2019
We only had one full day in San Francisco and this was the best way to see the city. Frank and Mia were our hosts. Frank was very informative and Mia did a great job driving. Riding in the converted cable car bus was a nice novelty. I would definitely recommend this tour!!!
... MoreLess
Reserve Now & Pay Later
We'll reserve your spot today, and you can cancel up to two days before your experience without making a payment. Secure your spot with ease, stay flexible, and never miss out.
How it works
Find your experience
Choose the experience you want knowing you can secure your spot without being locked in.
Make a reservation
Reserve now and pay later to secure your spot, commitment-free.
Choose when to pay
Come back to pay once your plans are set, or let auto-pay kick in two days before your experience.
Enjoy your experience
Now you're all set! Have a great time.
Frequently Asked Questions  | Terms & Conditions
Reserve Now & Pay Later
Secure your must-do activities without being locked in
Learn More